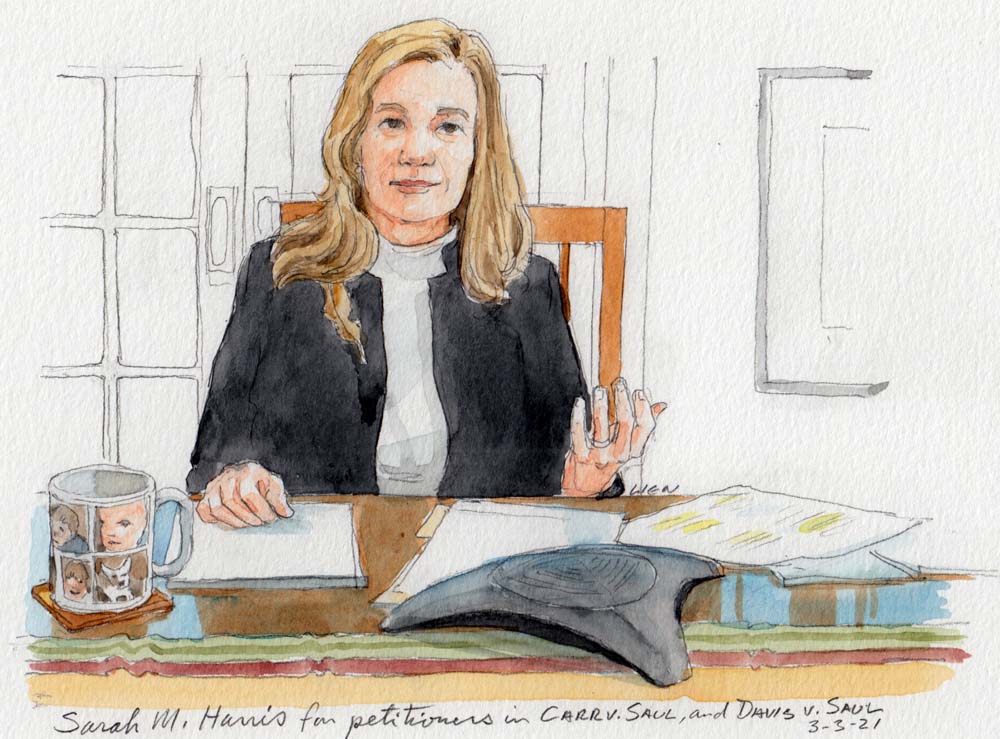 Thursday’s argument in Carr v. Saul follows on the Supreme Court’s 2018 decision in Lucia v. Securities and Exchange Commission, which held that the process for appointing administrative law judges for the SEC violated the Constitution’s appointments clause. All agree that the decision in Lucia applies to the ALJs that resolve disputes about Social Security benefits. The case now before the court could affect hundreds of claimants who had Social Security cases handled by improperly appointed ALJs, failed to raise the appointments clause issue before the ALJs, but did raise it when their cases later came to federal court. The government persuaded the lower courts that an “issue-exhaustion” doctrine barred the courts from considering the appointments clause issue for claimants who did not present it to the ALJ.

The Supreme Court previously rejected such an issue-exhaustion requirement at the appellate stage of agency Social Security proceedings (in a case called Sims v. Apfel), permitting claimants to raise issues in court that they did not raise before the agency. The Sims court reasoned that it made no sense to impose an issue-exhaustion requirement in a proceeding that is non-adversarial, especially when the government has not given any notice of that requirement to the claimants. The question in Carr is whether Sims applies when the claimant failed to raise the issue before the ALJ.

There were no fireworks while Sarah Harris was presenting argument on behalf of the claimants. Perhaps the most notable interchange was with Justice Samuel Alito, who challenged the idea that the claimants were harmed by the initial unconstitutional appointment of the ALJs, given that the government corrected that constitutional problem by reappointing the very same ALJs in accordance with the appointments clause after Lucia. “The ALJ was appointed by a lower-level official and now has been reappointed along with all the others by the acting commissioner,” Alito said. “So is this ALJ now smarter than he or she was at the time of your hearing? More inclined to be favorable?”

For Alito, granting hearings before a new ALJ “seems like an enormous waste of time and money. How … can you account to the taxpayers and other claimants for this? If these ALJs are going to be busy rehearing cases, other claimants who’ve never had a shot are going to have to wait. A lot of time is going to be wasted. And I don’t really see what is accomplished.”

The most telling discussion in Harris’ portion of the argument was an exchange with Justice Amy Coney Barrett, who asked whether “there are other agencies in which this exhaustion of issues requirement did not apply.” Harris responded that the same rule would affect the Department of Veterans Affairs and the Railroad Retirement Board, both of which had imposed issue-exhaustion rules by regulation. Barrett then underscored that last comment: “So, in both of those other agency contexts, the issue exhaustion rules are imposed by regulation?”

That emphasis on the failure of the Social Security Administration to adopt a regulation requiring issue exhaustion dominated the part of the argument presented by Austin Raynor on behalf of the government. For example, Justice Clarence Thomas, the author of the majority opinion in Sims, asked whether there is “a regulation on exhaustion,” doubtless knowing full well that there is not. And then when Raynor admitted that he could not rely on a regulation, Thomas retorted that if the exhaustion requirement is “not statutory and it’s not regulatory … what’s it based on?” In the same vein, Justice Elena Kagan reminded Raynor that “you told the court in Sims, I think, that the SSA had the matter of issue exhaustion under review. And the court specifically noted in that opinion that, of course, SSA could adopt a regulation. I mean, if this matters so much to SSA, it seems as though it would not have taken a whole lot of effort to adopt a regulation.”

When Barrett’s turn came around again, she went on at some length about how illogical it seemed to her to impose an issue-exhaustion requirement in a context as non-adversarial as Social Security hearings:

One of the reasons … in an adversarial system the issue-exhaustion requirement makes sense is that both sides have every incentive to raise all the issues that would benefit them. In this kind of proceeding, which is non-adversarial, what incentive does the claimant have to say to the ALJ, “You know, you actually can’t give me benefits and you can’t adjudicate this proceeding because your appointment should have been made under the appointments clause”? Especially when … the claimant’s interest is in speed of getting the disability benefits as soon as he or she can.

We can’t be sure precisely what the opinion will say. Justice Stephen Breyer, for example, emphasized the idea that the courts rarely require exhaustion of constitutional claims and that it would have been futile for the claimants to raise this particular claim before ALJs who had no authority to resolve it. And Alito well might write separately to emphasize what a waste of resources this is. But it seems pretty likely that the justices will rule for the claimants and that it will not take them very long to do so.