Argument analysis: The trail, the pipeline and a journey to the center of the earth 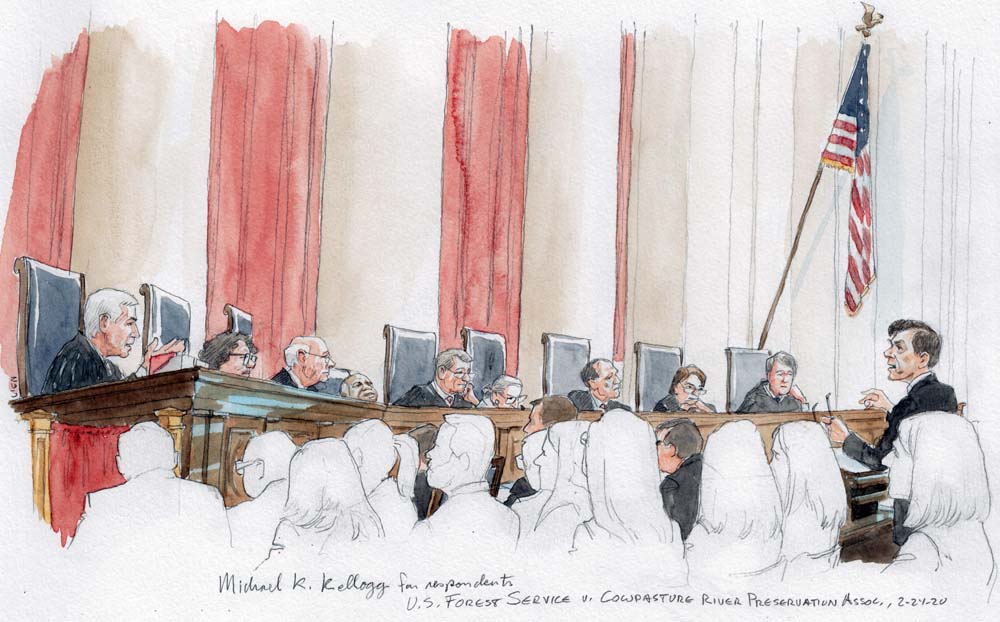 Environmental groups faced a skeptical bench during Monday’s argument in two consolidated cases, U.S. Forest Service v. Cowpasture River Preservation Association and Atlantic Coast Pipeline LLC v. Cowpasture River Preservation Association, as they fought to preserve a 2018 decision from the U.S. Court of Appeals for the 4th Circuit that had halted an $8 billion, 600-mile natural gas pipeline. At the heart of the dispute is a 2017 permit granted by the U.S. Forest Service to allow the Atlantic Coast Pipeline to cross the George Washington National Forest. The permit also authorized the developers to tunnel 600 feet beneath the Appalachian Trail within the forest. Vacating the permit, the 4th Circuit held that the entire 2,100-mile Appalachian Trail is part of the National Park System and therefore, under the Mineral Leasing Act, the trail is off-limits for energy development and pipeline rights-of-way.

At oral argument, a majority of justices appeared inclined to reverse the 4th Circuit. There was no clear consensus on the grounds for reversal, however, and we could see several opinions released this spring. The case involves multiple complex statutes enacted over 60 years and a bewildering array of arguments about plain meaning, context and congressional intent. Remarking on the statutory arguments on both sides, Justice Stephen Breyer said, “The statutes, you know, it’s like ping pong … they have this, you have that.”

Several justices seemed inclined to rule on narrow grounds and avoid the statutory morass about the precise legal status of the Appalachian Trail. The narrow basis for upholding the permit would be that the National Park Service’s administrative authority, even if it does cover the entire trail, does not extend to the proposed pipeline tunnel that would cross perpendicularly 600 feet beneath the trail.

The justices engaged deeply with the question of how deep toward the center of the earth the Park Service’s authority goes. “When I think of a pipeline that is 600 feet below the surface, that doesn’t seem like a trail,” Justice Samuel Alito said. “So instead of having to draw this distinction between the trail and the land, why can’t we just say that the trail is on the surface and something that happens 600 feet below the surface is not the trail?”

Breyer seemed attracted to ruling on narrow grounds as well. He said that he can see how a large park like Yosemite National Park “belongs to the Federal Government down to the center of the earth,” but he questioned whether the same is true for the Park Service’s administrative authority over a narrow 2,100-mile trail that passes through land under the jurisdiction of other federal agencies, as well as through state and private land. Michael Kellogg, representing the environmental groups, quickly responded that the Park Service’s administrative authority over the trail does extend to the center of the earth. That view would preclude any federal agency from approving a pipeline under the trail, no matter how deep the tunnel. Breyer seemed concerned about the implications of that argument: “If you’re saying it goes down to the center of the earth, then there are all kinds of things some other Congress might do.”

Breyer, Alito and Justice Elena Kagan also questioned Paul Clement, representing Atlantic Coast Pipeline LLC, the company developing the pipeline, about the possibility of a narrow ruling that distinguished the surface trail from the subsurface tunnel. Clement responded that such a narrow ruling would leave many questions unresolved about conflicting agency authority at the surface, where the trail meanders through 1,000 miles of property under Forest Service jurisdiction. Grabbing an opening, though, he concluded: “I represent the Atlantic Coast Pipeline. It’s not my job to resist winning this case on narrow grounds.”

The court could also issue a decision on broader grounds – that if Congress had meant to make a sweeping change to the siting of energy infrastructure on public lands, it would have done so through clear language rather than the cryptic phrasing of the 1968 National Trails System Act. In the court’s 2001 opinion in Whitman v. American Trucking Associations, Justice Antonin Scalia noted that Congress “does not alter the fundamental details of a regulatory scheme in vague terms or ancillary provisions—it does not, one might say, hide elephants in mouseholes.” Clement repeatedly emphasized this elephants-in-mouseholes theme throughout his argument, and he got some purchase both with Breyer and with justices on the conservative wing of the court.

“Your position has significant consequences to it, enormous consequences,” said Justice Brett Kavanaugh to Kellogg, adding that “you would expect to see clear language like that to generate the significant consequences that your position has.” Alito also seemed to want a clear textual command from Congress before the court would rule that the 2,100-mile trail blocks pipelines across federal lands. Alito denigrated Kellogg’s textual arguments as an attempt to “fit these statutes together” so that the pipeline developer “can’t get out of it.” Alito asked Kellogg, “do you have more than a gotcha argument?”

“Yes, we have an exception in the Mineral Leasing Act for lands in the park system,” Kellogg replied.

Kagan seemed most sympathetic to the environmental groups’ arguments, and she asked the most critical questions of the other side. She questioned Assistant to the Solicitor General Anthony Yang, arguing for the Forest Service, about why he could not simply concede that the Appalachian Trail is a “land.” Throughout their briefing, both Atlantic Coast Pipeline LLC and the Forest Service argued that the Park Service’s administration of the trail does not convert these 2,100 miles into “land” in the National Park System. They instead referred to the trail as a footpath or right-of-way that traverses land under the jurisdiction of the Forest Service.

But Kagan was clearly not buying it. “It’s a difficult distinction to wrap one’s head around, Mr. Yang. You’re saying the trail is distinct from … the land that is the trail. I don’t really quite know how to say it except that nobody makes this distinction in real life,” Kagan said. She added that the federal government’s briefs were “strange to read because you can’t ever just say what you mean, which is that the trail is a piece of land.”

Based on the oral argument, it is likely that there is a majority in favor of reversal. Whatever the outcome, the justices will grapple with the precedent this case might set for energy policy, for other national trails under the jurisdiction of the Secretary of the Interior and even for private property. The justices asked several hypotheticals about the power the secretary has over trails he administers that run through private property, such as the Selma to Montgomery National Historic Trail, or the locations where the Appalachian Trail runs right through downtown streets, as in Hanover, New Hampshire. At oral argument, the justices considered the ripple effects this case could have on everything from Indian burial grounds to snowmobile access to the Appalachian Trail to the fate of the maple syrup industry.

Justice Sonia Sotomayor said that in her view, the environmental groups had not “fully satisfied the parade of horribles that have been put forth” by the petitioners. Chief Justice Roberts, Justice Neil Gorsuch and Kavanaugh also seemed concerned about the implications for other public lands and for energy policy. “It really does erect a impermeable barrier” to pipelines, Roberts said, referring to the lower court decision.

Notably, the justices did not react to one of the core issues raised at the argument by the environmentalists: that because Congress said in 1968 that the Secretary of the Interior shall “administer” the Appalachian Trail, and two years later Congress defined the National Park System as “any area of land and water now or hereafter administered by the Secretary of the Interior through the National Park Service,” the whole trail is in the National Park System and is carved out from the pro-leasing, pro-pipeline policies of the Mineral Leasing Act. That textual argument attracted little notice from the justices, and it remains to be seen how much weight they will give to it in their opinions.

A ruling to uphold the 4th Circuit decision would likely kill the Atlantic Coast Pipeline by triggering an expensive reroute of the pipeline. Without the Forest Service permit, “the whole enterprise is done,” Yang emphasized at oral argument. A ruling to reverse the 4th Circuit, which now seems likely, would still leave the pipeline in doubt because at least seven other permits have been vacated by the 4th Circuit, resulting in multiple agencies’ revising their environmental reviews for the project in 2020 and 2021, and those revised documents could be challenged in court. A challenge to the overall pipeline approval from the Federal Energy Regulatory Commission is currently pending in the U.S. Court of Appeals for the District of Columbia Circuit. Despite these further legal hurdles, the pipeline developers recently announced that they expect to complete construction in late 2021 if they get a favorable ruling from the Supreme Court in this case.

Recommended Citation: Noah Sachs, Argument analysis: The trail, the pipeline and a journey to the center of the earth, SCOTUSblog (Feb. 25, 2020, 6:47 PM), https://www.scotusblog.com/2020/02/argument-analysis-cowpasture/