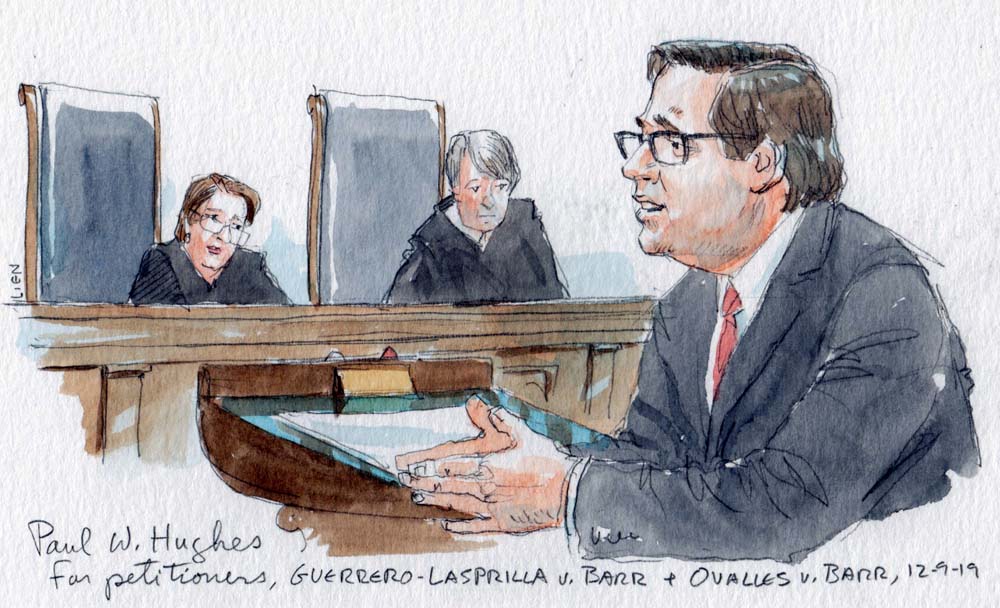 On Monday, the Supreme Court heard oral argument in the consolidated cases of Guerrero-Lasprilla v. Barr and Ovalles v. Barr. These cases focus on the meaning of a single statutory provision: 8 U.S.C. § 1252(a)(2)(D).

The parties agree the statute means that U.S. courts of appeals are authorized to consider “questions of law” raised in appeals by noncitizens convicted of certain crimes from decisions by the Board of Immigration Appeals regarding their removal from the United States. They also agree that courts of appeals have no jurisdiction to consider other questions raised by such cases. Finally, the parties agree that Congress drafted this statute in response to the Supreme Court’s decision in Immigration & Naturalization Service v. St. Cyr, in which the court warned that preventing review of legal questions in this type of appeal would create “substantial constitutional questions.”

Where the parties diverge is in their understanding of the breadth of the phrase “questions of law.”

Counsel for Pedro Pablo Guerrero-Lasprilla and Ruben Ovalles, Paul Hughes, presented the justices with the following reading of Section 1252(a)(2)(D): “There is no judicial review over historical facts, but there is review over their legal significance.”

The government’s counsel, Assistant to the Solicitor General Frederick Liu, argued for a different interpretation: Section 1252(a)(2)(D) does not permit review of “mixed questions of law and fact,” including “an application of law to fact.”

The justices appeared to agree that Congress intended to restrict the courts of appeals from reviewing large categories of cases coming to them from the BIA.

Given this backdrop, Justice Elena Kagan questioned Hughes about allowing broad appellate review over what she described as “really mixed” questions of law and fact. She noted that such questions can involve “the weighing of facts, the making [of] credibility judgments … the balancing of different facts against each other.” Justice Samuel Alito similarly noted that the petitioners’ standard would allow review in circumstances that required “a considerable exercise of judgment.”

Justice Neil Gorsuch pointed out that Hughes’ position would result in searching review of what are, in many cases, judgment calls that would otherwise typically be reviewed under the more deferential abuse-of-discretion standard. Questions of law are typically reviewed de novo, meaning they are reviewed from scratch without deference to the prior decision-making of the lower court. In contrast, discretionary orders are typically reviewed under an abuse-of-discretion standard, whereby an appellate court will give some deference to the lower court’s decision-making.

Liu seized on these points in his remarks, arguing that Hughes’ reading of Section 1252(a)(2)(D) would “undo Congress’s efforts to limit the scope of judicial review.” Allowing review of mixed questions of law and fact, and the application of law to fact, Liu argued, would gut the statute and render it meaningless.

Gorsuch and Alito, along with Justices Sonia Sotomayor, Stephen Breyer and Chief Justice John Roberts, all pressed Liu on his conclusion that courts of appeals could “never review an application of law to fact” when Section 1252(a)(2)(D) applies.

Gorsuch worried that Liu’s reading of the statute would eliminate meaningful judicial review of BIA decisions. If the appellate courts are restricted to determining whether the BIA has recited the correct legal standard, and they cannot review whether that standard was correctly applied, the appellate courts would become “a rubber stamp,” and would have to approve BIA decisions “no matter how unreasonable” they are.

Kagan, Gorsuch, Sotomayor and Breyer questioned whether such a reading of the statute would infringe on the longstanding presumption of judicial review of agency action. Kagan emphasized that this presumption rests on important separation of powers principles. Reading Section 1252(a)(2)(D) to allow review of the BIA’s application of law to fact would be consistent with the presumption of reviewability and would further separation of powers principles by providing a check against executive action that is “unlawful, unfair, arbitrary, capricious, unconstitutional, or an abuse of discretion,” in Breyer’s words.

Liu responded to this line of questioning by emphasizing congressional intent. Congress intended to foreclose appeals on mixed questions of law and fact, he argued, while preserving judicial review “over the most important questions” of pure law. Justice Brett Kavanaugh seemed to be tossing softballs in Liu’s direction in order to help develop this distinction.

It was this final point that Hughes seized on in his rebuttal. Hughes emphasized that his understanding of Section (a)(2)(D) offers lower courts “clear direction” that is consistent with both congressional intent and the presumption of judicial review.

The importance of the presumption of judicial review continued to percolate in Tuesday’s second oral argument, in Thryv, Inc. v. Click-to-Call Technologies. Roberts, Gorsuch and Kagan each referred back to the argument in Guerrero-Lasprilla to touch on how the presumption of judicial review protects individuals from “whimsical executive decisions,” as Gorsuch phrased it in Thryv.

A decision in these cases will answer the narrow question of whether 8 U.S.C. § 1252(a)(2)(D) prevents U.S. courts of appeals from reviewing certain equitable-tolling decisions made by the BIA. Yet, as the oral argument confirmed, this case has broader implications. It will address whether Congress stripped appellate courts of authority to review not just factual decisions but the application of facts to law.