Argument preview: Justices to consider when a Rule 59 motion is actually a second-or-successive habeas petition 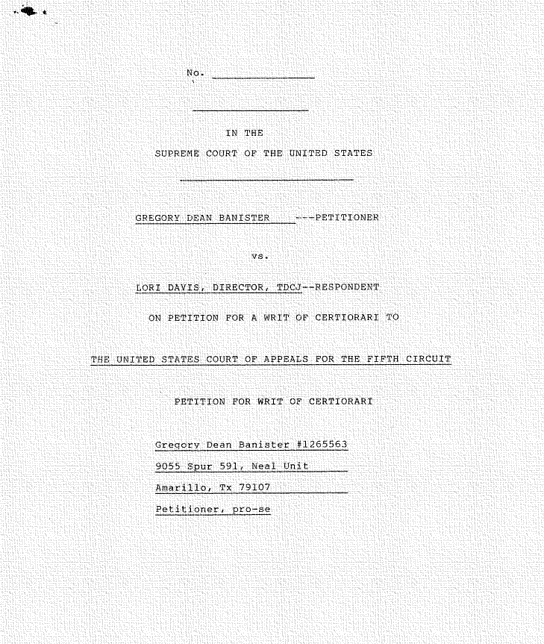 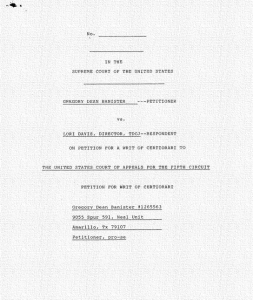 When Congress dramatically narrowed federal post-conviction review of state criminal convictions in the Antiterrorism and Effective Death Penalty Act of 1996, one of the central changes was to make it almost impossible for state prisoners to bring “second-or-successive” federal habeas petitions—to take another shot at collaterally attacking the state criminal proceeding in federal court after the first one was unsuccessful. But what if a state prisoner files a timely motion to amend the judgment in his first federal habeas petition under Rule 59(e) of the Federal Rules of Civil Procedure? Should that motion be treated as part of the first federal post-conviction proceeding (to be governed by AEDPA’s somewhat less restrictive rules), or as the initiation of a second (that will usually be barred by AEDPA)? That is the question the justices will consider next Wednesday in Banister v. Davis. And although the case arose out of a hyper-technical dispute over the timing of an individual state prisoner’s habeas appeal, how the justices resolve that dispute could have significant implications for the scope of federal post-conviction review for state and federal prisoners more generally.

Gregory Dean Banister was convicted by a state court in Texas of aggravated assault with a deadly weapon for striking and killing a bicyclist with his car. Among the evidence the state introduced at trial was the result of a post-accident blood draw, to which Banister did not consent, that revealed the presence of cocaine in his system. After an unsuccessful appeal and state post-conviction proceeding, Banister filed a pro se federal habeas petition, principally claiming that his trial counsel had been constitutionally ineffective in failing to file a timely motion to suppress the blood-draw evidence, failing to challenge the state’s toxicology expert on a key ground, failing to investigate the weather conditions at the time of the accident and failing to object to a jury instruction that inappropriately referenced a prior conviction. The district court denied Banister’s habeas petition and declined to issue a certificate of appealability to allow him to appeal that denial to the U.S. Court of Appeals for the 5th Circuit, concluding that Banister had not established either that his trial counsel had been deficient or that any deficiencies materially prejudiced the trial verdict. Banister then filed a timely motion under Rule 59(e) in which he did not present any new claims, but merely challenged the district court’s analysis of his ineffective-assistance claims.

In June of this year, the Supreme Court granted Banister’s petition for certiorari, reframing the questions presented in his (pro se) petition as “[w]hether and under what circumstances a timely Rule 59(e) motion should be recharacterized as a second or successive habeas petition under Gonzalez v. Crosby, 545 U. S. 524 (2005).” In addressing that question in his merits brief, Banister (now represented by counsel) offers two principal arguments.

First, he argues that a timely Rule 59(e) motion to alter or amend the judgment in a state prisoner’s first federal habeas petition should never be treated like a second-or-successive habeas petition because, so long as it is timely, the Rule 59(e) motion is necessarily “part of” the first proceeding. Although the Supreme Court in Gonzalez had held that some motions for relief from judgment under Rule 60(b) should be treated as second-or-successive motions, Banister argues that—unlike Rule 60(b) motions, which seek to reopen adverse final judgments after the appellate process has run its course—a Rule 59(e) motion must be filed before the first appeal and so does not raise the same opportunity “to revive a fully adjudicated first habeas application.” Both amicus briefs in support of Banister—by a group of leading academic experts on habeas corpus and the National Association of Criminal Defense Lawyers—likewise emphasize the myriad structural differences between the two forms of relief, and Rule 59(e)’s historic role in allowing trial courts to perfect their judgments prior to an appeal.

Second, Banister argues that Rule 59(e) motions to amend the judgment of a first federal habeas petition should at least be treated as part of that proceeding when they do not seek to raise new claims—as was true in his case. Thus, Banister argues, the court could resolve his case on the narrower ground that, at least when a Rule 59(e) motion merely seeks reconsideration of the district court’s initial decision, it should not be understood as a new, second-or-successive application.

In contrast, the state of Texas, representing respondent Lorie Davis, the director of the Correctional Institutions Division of the Texas Department of Criminal Justice, argues that Rule 59(e) motions should be treated as second-or-successive applications whenever they present claims that were, or could have been, adjudicated in the first habeas petition. Thus, what Texas calls “the Gonzalez principle” “applies with equal force to Rule 59(e) motions.” In an amicus brief in support of the state, the federal government takes a similar position, arguing that “[w]hen a district court has already entered a final judgment denying habeas relief, a motion that raises new claims or seeks readjudication of previously rejected claims is ‘inconsistent with’ AEDPA’s bar on second or successive habeas applications, irrespective of which particular Federal Rule of Civil Procedure it may invoke.” Fifteen other states, who also filed an amicus brief in support of Texas, agree with that argument.

But as Banister notes in his reply brief, there is no evidence prior to AEDPA of a court’s ever construing a timely Rule 59(e) motion to reconsider the denial of a first habeas petition as a second-or-successive application for relief—and no evidence in AEDPA or its legislative history of an attempt to change that understanding. Instead, Banister explains, the argument advanced by Texas and its amici rises and falls on Gonzalez—and whether what the court there held with respect to Rule 60(b) motions should also apply to Rule 59(e).

It’s likely that this will be the focus of next Wednesday’s argument—with justices pushing back on the one hand against Banister and his amici’s efforts to distinguish Rule 59(e) from Rule 60(b), and on the other hand against Texas and the federal government’s efforts to read them together. And although a decision siding with Texas would only mean that Banister’s application for a certificate of appealability was untimely in this case, it could have far broader ramifications going forward—because AEDPA limits to two very specific circumstances the available grounds for relief in a second-or-successive application for post-conviction relief by state or federal prisoners. A ruling for Texas, therefore, would dramatically curtail the availability of Rule 59(e) motions in all first federal habeas petitions by state or federal prisoners.