It has been more than two years since the Trump administration announced that it would end the Deferred Action for Childhood Arrivals program, known as DACA, an Obama-era policy that allows undocumented young adults who came to the United States as children to apply for protection from deportation. Today the Supreme Court heard oral argument in a set of challenges to the Trump administration’s decision. After roughly 80 minutes of debate in a packed courtroom, before an audience that included politicians and dozens of DACA recipients, it wasn’t clear how the case is likely to turn out. Several justices appeared concerned that the Trump administration’s decision-making process had not adequately considered the effects of rescinding DACA, but on the other hand they weren’t necessarily convinced that sending the case back for a do-over would actually make much of a difference. 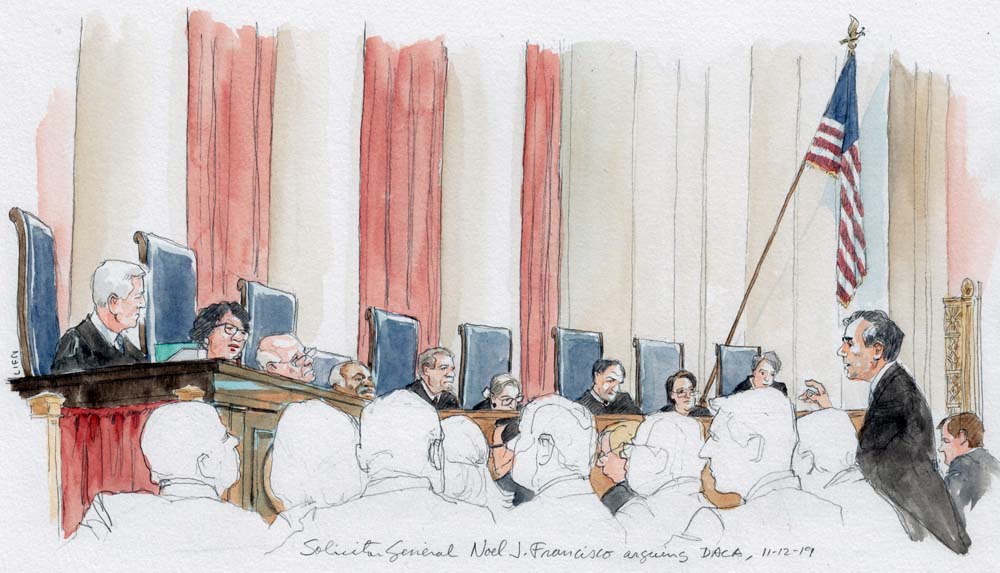 The stakes in today’s oral argument were high. Since the policy was announced in 2012, over 700,000 people have obtained protection from deportation under DACA, which permits them to work legally in the United States and also gives them access to benefits like health insurance and driver’s licenses. The challengers in three cases argued together today – originally filed in California, the District of Columbia and New York – contended that the Trump administration’s decision to end DACA violated the Administrative Procedure Act, which is the federal law governing administrative agencies, and the lower courts ordered the government to keep DACA in place.

But earlier this year the Supreme Court granted the government’s request to weigh in, and now the justices will have the final word. They began this morning by considering a threshold question: whether the government’s decision to end DACA is something that courts can review at all.

Arguing for the federal government, U.S. Solicitor General Noel Francisco urged the justices to stay out of the fray. The administration’s decision to end DACA is not subject to judicial review at all, he suggested, because it simply ended a prior administration’s choice not to enforce immigration policy. Such a choice falls squarely within the agency’s discretion and therefore cannot be second-guessed by the courts, Francisco stressed.

Justice Ruth Bader Ginsburg was skeptical, telling Francisco that there is a “strange element” to his argument. You argue that the decision to end DACA falls within an agency’s discretion, she suggested, but at the same time you are arguing that the government was required to end DACA because the program was illegal, which would not involve any discretion at all. 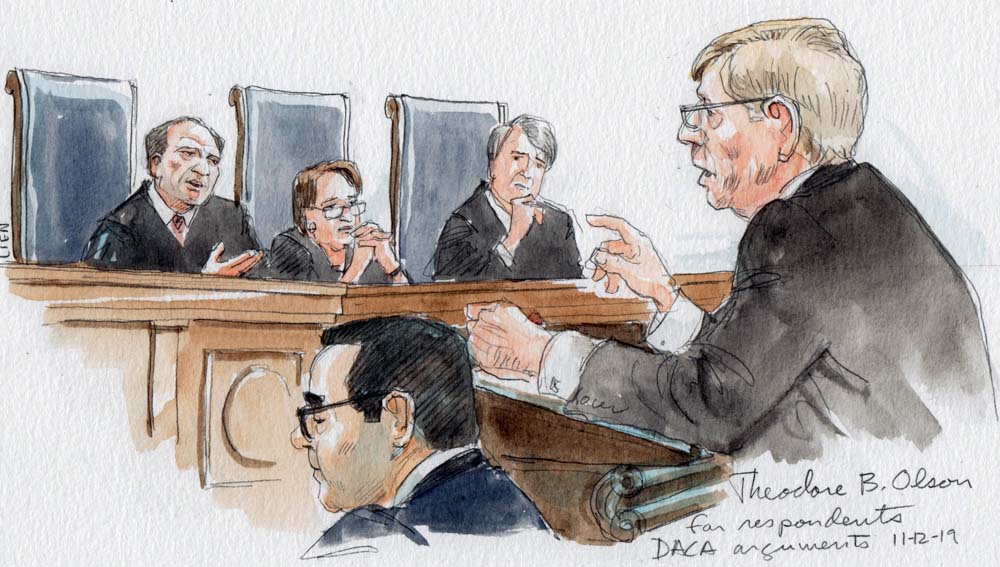 Justice Samuel Alito was more sympathetic to Francisco’s contention that the decision to rescind DACA is not one that courts can review. When Theodore Olson, who argued on behalf of DACA recipients and civil rights groups, told the justices that they should start with a “strong presumption” that a federal agency’s actions are reviewable, Alito asked Olson how to draw the line in challenges to an agency’s exercise of its discretion. If a law enforcement agency has guidelines for when it will exercise its discretion not to prosecute, Alito asked, is the decision to tighten those guidelines reviewable?

Justice Neil Gorsuch was also concerned about how to draw the line between agency decisions that are and are not reviewable. He acknowledged that he was hearing a “lot of facts” and “they speak to all of us,” but he pressed Olson for a limiting principle.

The second question before the justices was whether the Trump administration’s decision to end DACA violated the law. Here the case is in a somewhat unusual posture, because everyone agrees that the administration could end DACA if it wanted to. As a result, the focus is largely on the process by which the Trump administration reached its decision, rather than the substance of the decision itself. In particular, several justices pressed Francisco on whether, before deciding to end DACA, the government had sufficiently considered the extent to which DACA recipients and others had relied on the program, and they suggested that the court should send the case back for more consideration and a better explanation than the Department of Homeland Security has provided.

Francisco resisted, telling the justices that any interest that DACA recipients may have had in keeping the program in place were “extremely limited” because the program was always intended to be temporary, as evidenced by the fact that protection from deportation was only granted in two-year increments. And in any event, he continued, the decision to rescind DACA would only violate the APA if the government had entirely failed to consider an important aspect of the problem before it. But in this case Kirstjen Nielsen, the secretary of the Department of Homeland Security, considered the reliance interests “quite clearly and explicitly” but concluded that they didn’t justify retaining a program that violated the law.

Justice Elena Kagan pushed back. She acknowledged that Nielsen’s memorandum contained a “conclusory statement about weighing the reliance interests,” but she pointed out that Nielsen weighed those interests against what Nielsen regarded as the “questionable legality” of DACA. But if some of us believe that DACA is legal, Kagan asked, is the memo then enough?

Francisco emphasized that the Nielsen memorandum contained other reasons – totally apart from the illegality of DACA – justifying the decision to end the program, but Justice Sonia Sotomayor chimed in. Sotomayor suggested that “there’s a whole lot of reliance interests that weren’t looked at,” including a promise by President Donald Trump that he would find a way to keep DACA recipients in the United States. “But, really,” Sotomayor asked, “where is all of this in the memo?” “And where,” she continued, “is the political decision made clearly – that this is not about the law, this is about our choice to destroy lives.” 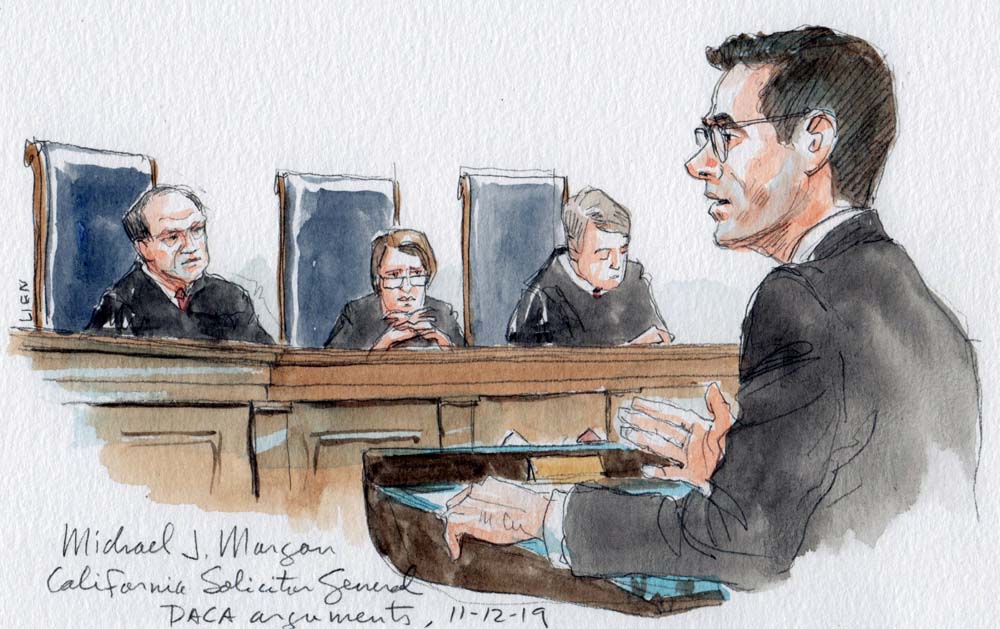 Olson and Michael Mongan, California’s solicitor general, agreed that the case should be sent back. Olson emphasized that the Trump administration was required to provide an “accurate, reasoned, rational, and legally sound explanation” for its decision to end DACA but “utterly failed to do so” because it did not want to take responsibility for the decision, preferring to blame it on Congress and the courts.

Mongan echoed that idea, arguing that it was up to the Trump administration to decide how to frame the decision to end DACA. The government could have opted to take responsibility for a discretionary decision, he explained, but instead chose to tell the public that it was ending DACA because the program was unlawful. That’s the government’s prerogative, Mongan acknowledged, but it has to defend the decision based on the justification that it offered at the time. And sending the case back would require the Trump administration to issue a new decision that took ownership of the choice to terminate DACA.

But some justices appeared unconvinced that sending the case back to the lower courts would be a good idea or even make a difference. Gorsuch observed that the government could address the interests that would be affected by the termination of DACA in 15 pages, rather than in a paragraph, but it would take six more years, during which DACA recipients would remain in limbo. And Justice Stephen Breyer admonished Mongan that courts should not “play ping-pong with the agency.”

Alito was even more dubious. “Do you seriously want to argue,” he asked Olson, that if the case were to go back and DHS were to repeat the same things that are outlined in the Nielsen memo, “giving all of these reasons and saying that each one is an independently sufficient basis for the action,” the decision to end DACA would still be illegal?

In his rebuttal, Francisco tried to cut off any further discussion about a remand by reiterating that the government had several independent reasons, beyond simply its conclusion that DACA was illegal, for deciding to end the program. Both Ginsburg and Kagan suggested that the government nonetheless might have reached a different decision if it had believed the program was legal. Ginsburg told Francisco that Nielsen’s memo was so “infected” with the idea that DACA was illegal that it is impossible to say that she would have reached the same conclusion if there had been “a clear recognition that there was nothing illegal about DACA.” “If we take that out,” Ginsburg observed, “then she would be saying we stand up and say this is the policy of our administration. We don’t like DACA and we’re taking responsibility for that, instead of trying to put the blame on the law.”

Franciso responded by telling the justices that the government “owns” the decision to end DACA. We’ll know by summer whether he succeeded in persuading them.