Empirical SCOTUS: A new term with plenty of hype 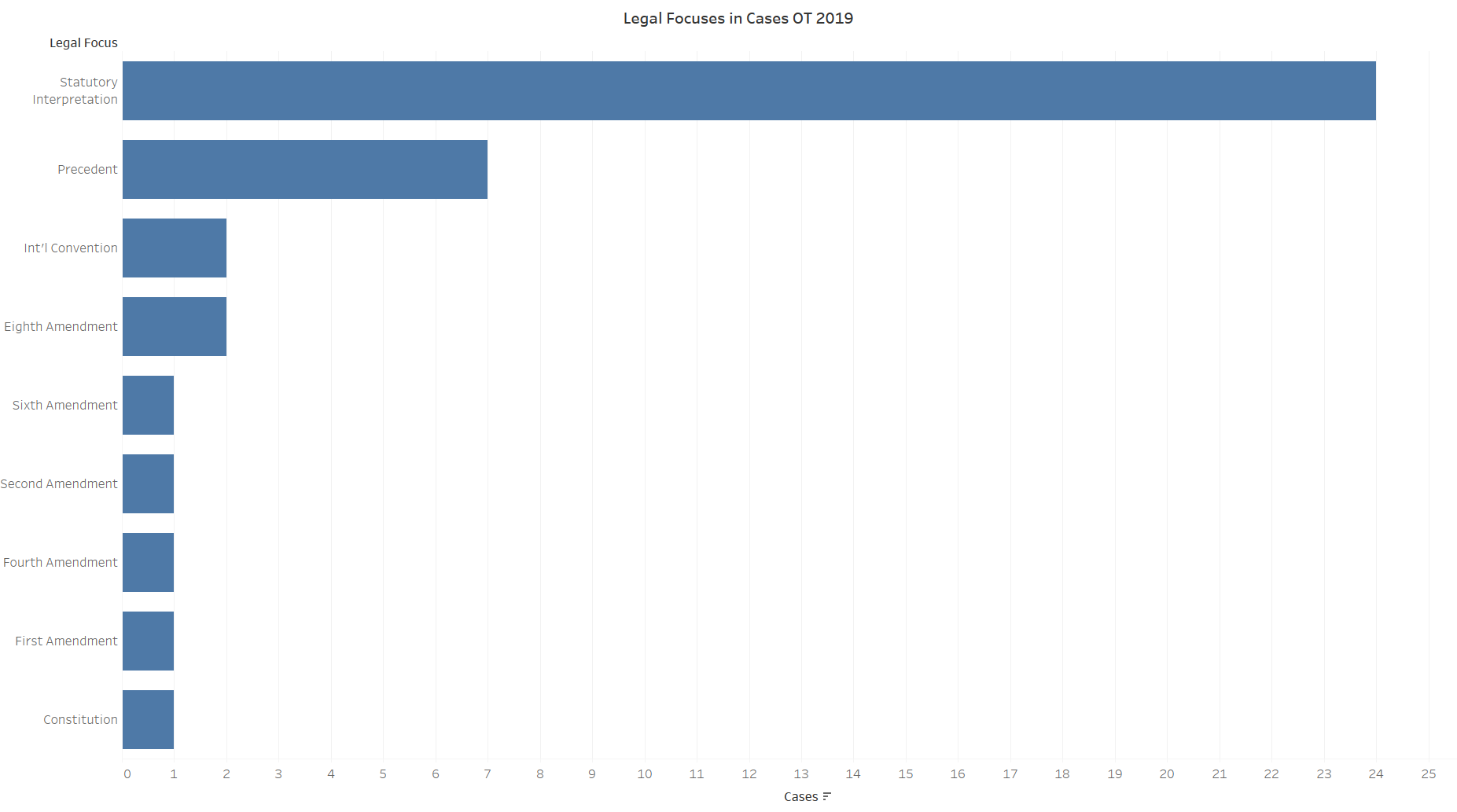 This is going to be a big year at the Supreme Court, likely with more fireworks than the last few. Since Justice Antonin Scalia passed away during the 2015 Supreme Court term, the court has been in an adjustment period. There was the long stint without a ninth justice. Justice Neil Gorsuch was finally confirmed at the tail end of the 2016 term. At the end of Gorsuch’s first full term in 2017, Justice Anthony Kennedy announced his retirement. This past term was Justice Brett Kavanaugh’s first term on the court.

Justices are often prone to agreement with other justices during their first term on the court, leading to a high frequency in the majority (Kavanaugh had the highest frequency in the majority of the justices last term at 88 percent), and they begin to develop their own pattern of voting in subsequent terms. The consensual norm in a justice’s first year is known as the “freshman effect.” Research from Professor Lee Epstein and others has shown how justices’ preferences change over time.

Now that Kavanaugh is in his second term on the court and the justices have begun to establish new voting relationships with one another, we might expect more coalition voting among the justices. As it was, last term, the more conservative justices voted together in seven 5-4 decisions and the more liberal justices voted together in the majority in 10 5-4 decisions. One major shift this term is in the tenor of the cases the court has granted. Although the court heard some noteworthy cases last term, and issued perhaps one of its most profound decisions in years with Rucho v. Common Cause, the court’s overall docket was far from electrifying. That is likely to change this term, when the court will decide cases that involve issues ranging from Second Amendment rights, to the legality of DACA, to employment discrimination based on sexual orientation and gender identity. Based on the justices’ past decisions in cases dealing with similar issues, we might expect them to diverge along ideological lines in these cases as well as in many others.

There are several important points raised in briefs in these cases that do more than merely highlight the cases’ main issues.

Briefs in several cases request the court to examine and potentially overrule its past decisions:

What do the cases have in common this coming term? They deal with many similar issues and will help the court confront and clarify doctrine in several key areas. The following figure identifies the general issues in the cases already granted for the coming term: 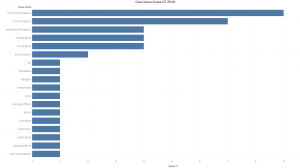 The most cases, nine, deal with criminal-procedure issues. Some of these cases include Ramos v. Louisiana (whether the 14th Amendment fully incorporates the Sixth Amendment guarantee of a unanimous verdict) and Kahler (whether the Eighth and 14th Amendments permit a state to abolish the insanity defense). The predominance of criminal-procedure cases this term is in line with recent years, as the following graph for the 2005-2017 Supreme Court terms from the Supreme Court Database shows: 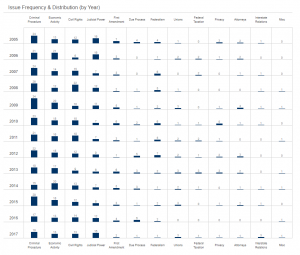 The coding in this post does not totally align with the issues coded in the Supreme Court Database, because this post looks at case areas more granularly. This approach shows that the court will devote much of its energy to defining civil procedure and will continue its recent focus on intellectual-property and immigration-related cases.

When we break down the cases on the court’s docket so far by the type of law or legal issue involved, we get a different take on the areas of the court’s focus. 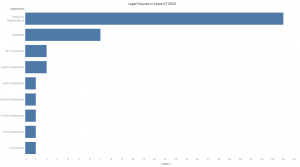 The court as usual will focus its energies on interpreting the meaning and constitutionality of federal statutes. As the first figure made clear, though, the court will also review a good deal of its past precedent. The court has more Eighth Amendment cases so far on its slate than cases dealing with other amendments and will also review provisions from several international conventions (something not terribly common for the court). Invariably, we will see more cases in which constitutional amendments come into play as the court adds more cases to its 2019 merits docket. 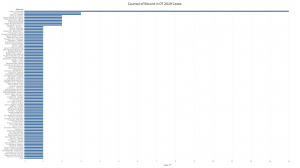 As discussed above, Francisco is listed most often as counsel of record. All the other attorneys listed as counsel of record in multiple cases are prominent practitioners before the Supreme Court. They include Kansas’ Solicitor General, Toby Crouse (Kansas has three cases upcoming before the Supreme Court this term), Paul Clement, Sarah Harrington, Shay Dvoretzky, Paul Hughes, Neal Katyal, Lisa Blatt, Joe Palmore and Donald Verrilli.

When we look at the firms of record for the merits parties in these cases, we see many prominent firms with extensive Supreme Court experience as well. 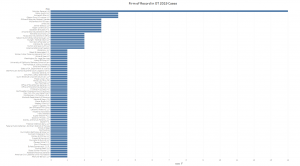 After OSG, Sidley Austin, Kirkland & Ellis and Gibson, Dunn & Crutcher are the three most frequent firms of record, listed four times apiece. This means that multiple firms with expertise in Supreme Court practice will once again have a role in a large swath of cases before the court.

With only two of the seven oral argument sittings already scheduled for the 2019 term and many briefs left to be filed, groups have already filed over 260 amicus briefs on the merits. This level of interest from nonparties gives a sense of the importance of these cases to the greater population as well as to the specific groups named in the filings. The following graph tracks the groups that have filed multiple amicus briefs on the merits in upcoming cases (note that the brief names often only cover the first-named group on a brief): 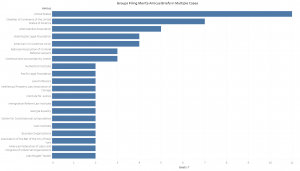 As is usually the case, the United States is the most frequent amicus group on the merits so far this term. The Chamber of Commerce has filed the second most briefs so far with seven, followed by the American Bar Association with five, and the Washington Legal Foundation and American Civil Liberties Union with four apiece. Many of these groups are repeat amicus filers before the court, and several are regularly cited in Supreme Court opinions.

The number of amicus filings so far this term provides evidence of the interest in the cases that have been granted. We can expect the court to grant more cases for review in the 2019 term in the upcoming months. Some may deal with contentious and political issues and will more than likely lead to lengthy debates among scholars and the press. We will see whether the court stays out of the political fray, as some justices advocate, or continues to take on heavily politicized issues, as has often been the case in past years – aside from the interlude after Scalia passed away, when only eight justices sat on the court.