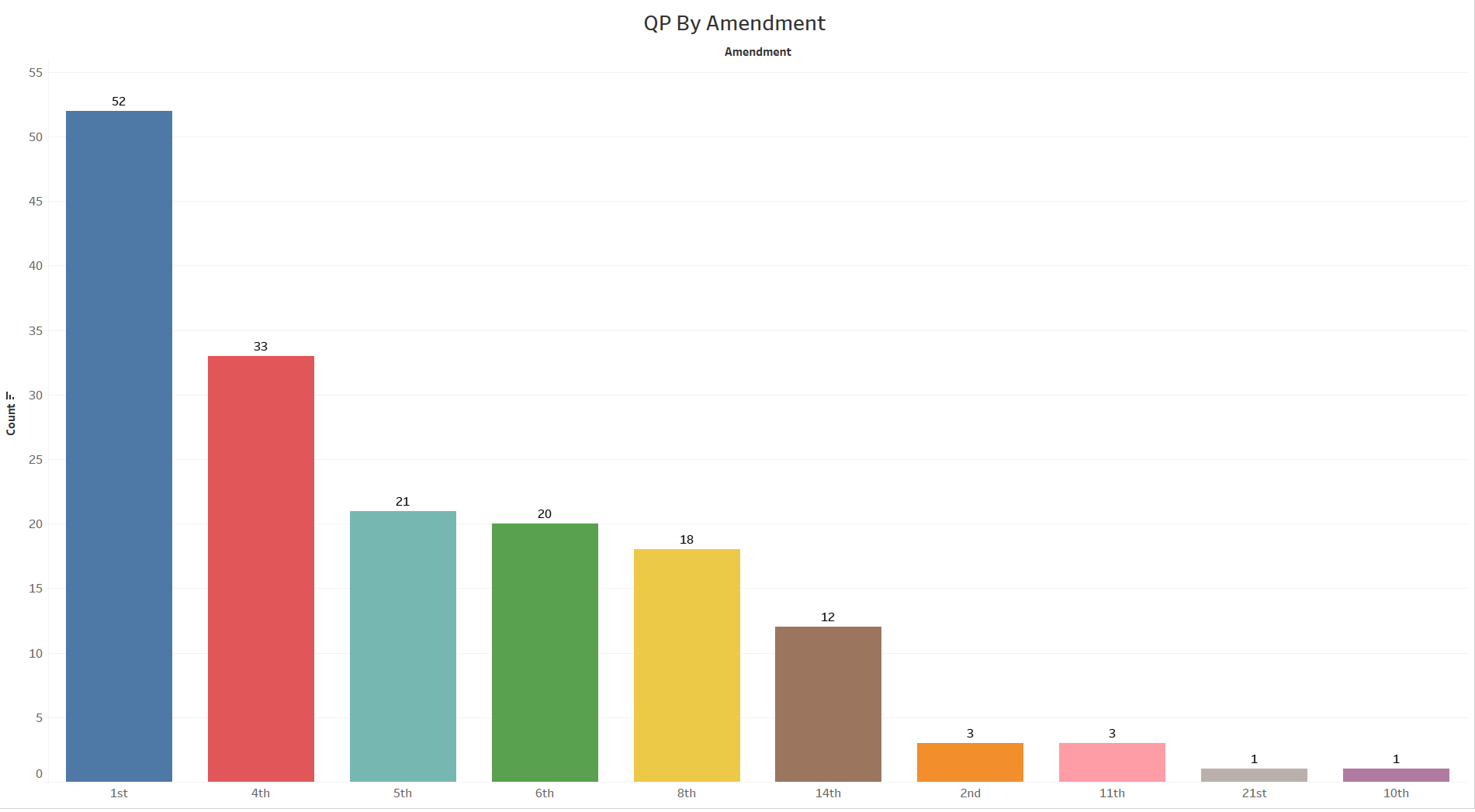 The Constitution as originally drafted did not include certain specific rights and restrictions on the power of the government. These were instead later added as amendments to the Constitution in the form of the Bill of Rights. Commentary leading up to the establishment of the Constitution found in the Federalist Papers discusses the importance of amendments and the process by which they might be established. In Federalist No. 85, Alexander Hamilton describes the amendment process and opines on the relative ease and difficulty of passing amendments once the Constitution has been ratified. The purpose of the Bill of Rights is explained in its own preamble: “Conventions of a number of the States, having at the time of their adopting the Constitution, expressed a desire, in order to prevent misconstruction or abuse of its powers, that further declaratory and restrictive clauses should be added: And as extending the ground of public confidence in the Government, will best ensure the beneficent ends of its institution.” 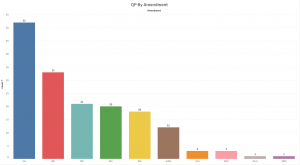 How were these QPs distributed across time? The next figure looks at the number of QPs that raised an issue under a given amendment based on the year of the cert grant. 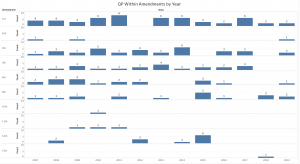 A few points to note about this figure. First, not all cases that implicate an amendment raise it in the QP, and so these numbers likely undercount the total number of cases in which these types of questions arise. Second, Supreme Court terms and cert-grant years do not always line up. For instance, there were no First Amendment QPs in the 2012 batch of grants – even though the court heard AID v. Alliance for Open Society International during the 2012 term, and the QP in this case raised a question under the First Amendment – because the cert grant was in 2013.

One other interesting aspect of these QPs is that some varied considerably in length depending on the amendments they examined (Length was measured by the QP word count taken from the entire length of the QP considered by the court.). Although it is difficult to make general claims about the length of QPs dealing with amendments that the court considers infrequently, such as the Second Amendment, amendments examined in a greater number of QPs give us a better sense of the typical length for such QPs. In the next figure, the top graph has the average QP word counts by amendment and the bottom graph has the count of QPs by amendment. 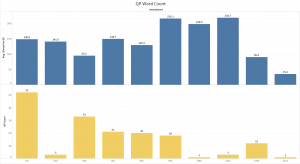 Many of the amendments have QPs of similar length. One noteworthy difference is Eighth Amendment QPs, which are quite a bit longer on average than those under other amendments with large numbers of observations. The word-count distributions that make up these averages help with understanding these differences. The following figure has the distributions for the First, Fourth, Fifth, Sixth and Eighth Amendments. 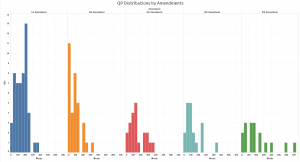 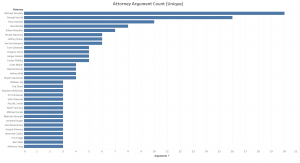 Michael Dreeben, one of the few attorneys with over 100 oral arguments before the Supreme Court and who recently retired from the Solicitor General’s office, argued the largest number of cases in this set, with 20. He is followed by former SGs Donald Verrilli with 16, Paul Clement with 10, and Neal Katyal with eight. Another prolific government attorney, Edwin Kneedler, is next with seven arguments. Three attorneys have six arguments apiece: Nicole Saharsky and Ian Gershengorn (also a former SG) both argued cases for the government, while Jeffrey Fisher has the most arguments for an attorney who did not argue cases for the federal government during the time period of this case set.

We can split these attorneys by several case characteristics. The next figure looks at attorneys with arguments in cases that cumulatively dealt with at least three different constitutional amendments. This list includes 16 attorneys. 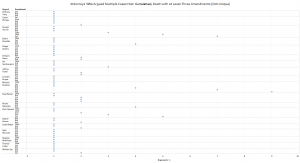 The next figure focuses on attorneys who argued multiple cases with QPs looking at the same amendments. 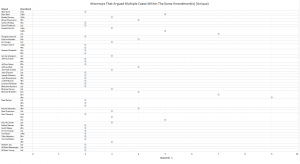 QPs provide a heuristic device to quickly understand the general issue of a case. They are extremely important, because they may be the first thing a clerk (or justice) looks at when reviewing a cert petition. Often, important aspects of cases are not captured in QPs, although when drafted well, a QP can signal important reasons why the court should grant cert in a case. One potentially salient reason for a cert grant is when government actions may run awry of rights protected by constitutional amendments. Many veteran attorneys are well versed in arguing these cases and continue to do so. The large number of attorneys arguing only one of these cases, though, shows that features aside from attorney experience are relevant, and that attorneys based in the geographic areas where these issues arise and who have specific expertise in these subjects may very well be the ones arguing before the justices in future cases.

Congratulations to Gail Curley, the new Marshal of the Supreme Court. The Marshal supervises the Court's police, cries in the Court with the familiar "Oyez," and (somewhat oddly) is responsible for paying the Justices' salaries. https://twitter.com/joshgerstein/status/1389212773108920323

JUST IN: If you’re the kind of person always expecting the Marshal of the Supreme Court to make an arrest, there’s a new sheriff in town #SCOTUS