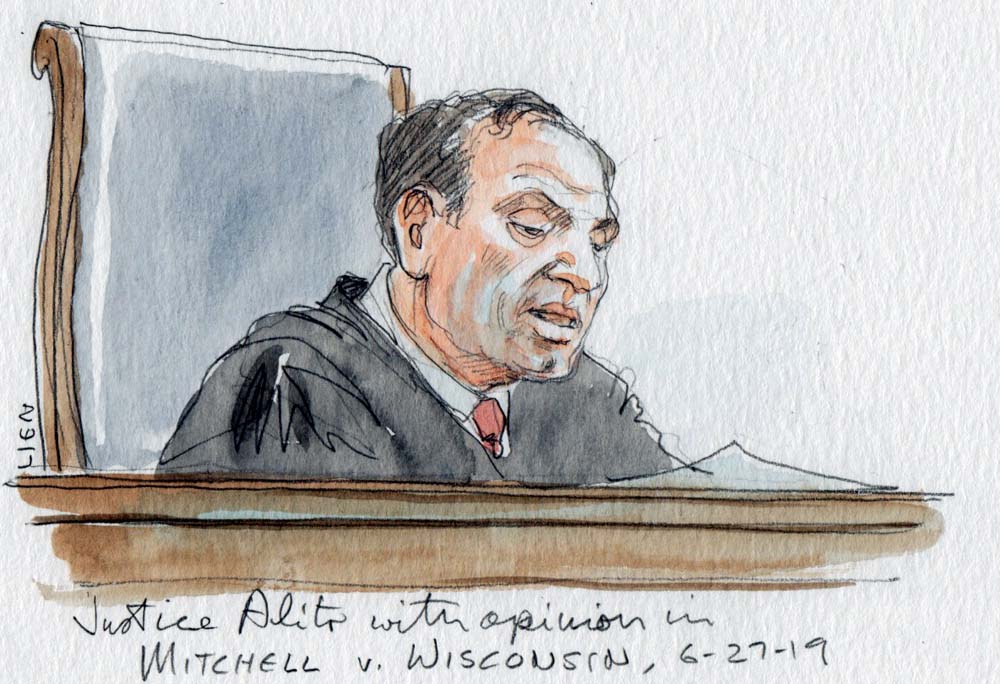 Yesterday a divided Supreme Court ruled that the Fourth Amendment generally does not bar states from taking a blood sample from an unconscious drunk-driving suspect without a warrant.

The issue came to the Supreme Court in the case of Gerald Mitchell, whom police found six years ago on a beach in Sheboygan, Wisconsin. Mitchell was wet, shirtless, covered in sand and slurring his words. Police arrested Mitchell after a preliminary breath test indicated that his blood-alcohol level was three times the legal limit. But those test results couldn’t be used in court, and police soon realized that Mitchell was too drunk to do a second breath test, so they took him to the hospital for a blood test instead. Before they arrived at the hospital, Mitchell had passed out. But hospital staff drew blood anyway, obtaining a sample with a blood-alcohol level of 0.222. 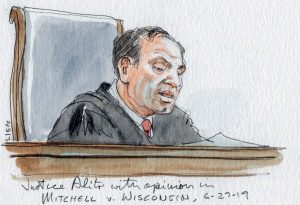 Mitchell was charged with driving while intoxicated. He fought to keep the results of the blood test from being used against him, arguing that the Fourth Amendment required the police to get a warrant. The state answered that the blood test was constitutional, because of a state law that assumes both consent to a blood test for anyone who drives on Wisconsin’s roads and that an unconscious driver has not withdrawn his consent.

Writing for four justices – Chief Justice John Roberts, Justices Stephen Breyer and Brett Kavanaugh and himself – Justice Samuel Alito explained that although the Fourth Amendment generally requires a warrant for a search, there are a variety of exceptions to this rule, including one for “exigent circumstances,” which allows searches without a warrant to “prevent the imminent destruction of evidence.”

The exigent-circumstances exception, Alito continued, will normally allow police to take blood from an unconscious drunk-driving suspect without having to get a warrant. Blood-alcohol limits serve an important purpose, Alito wrote: They “are needed for enforcing laws that save lives.” And they need to be performed promptly, Alito added, because alcohol will disappear from the bloodstream over time. “Evidence is literally disappearing,” he summarized, “by the minute.” When a suspect can’t take a breath test, then the only option is to perform a blood test; indeed, Alito observed, it would be “perverse” if it were harder to do the blood test when someone is unconscious, and therefore even more intoxicated.

Moreover, Alito noted, the fact that the driver is unconscious will create an extra burden on police officers, who likely will have to take the driver to the hospital “not just for the blood test itself but for urgent medical care.” The driver’s condition may create other problems that take up the officers’ time – for example, preserving evidence or directing traffic. Having to deal with all of these issues, Alito posited, would create a “dilemma” for police: “It would force them to choose between prioritizing a warrant application, to the detriment of critical health and safety needs, and delaying the warrant application, and thus the” blood-alcohol test. And although technology has made it possible for police to get a warrant “faster and more easily,” “the time required has shrunk, but it has not disappeared.”

Finally, although yesterday’s decision creates a general rule that police do not need to get a warrant to take a blood sample from an unconscious driver, Alito left open the possibility that, “in an unusual case,” the rule would not apply – for example, if the suspect could show “that his blood would not have been drawn if police had not been seeking” blood-alcohol information, and that police didn’t have any reason to believe that they couldn’t have gotten a warrant. Because Mitchell had not had a chance to meet this standard, Alito concluded, his case would go back to the Wisconsin courts to give him a chance to do so.

Justice Clarence Thomas agreed with Alito on the result, if not his reasoning. Thomas maintained that because alcohol disappears from the blood with time, police should be able to perform a blood test whenever they suspect someone of drunk driving – conscious or not.

Justice Sonia Sotomayor dissented, in an opinion that was joined by Justices Ruth Bader Ginsburg and Elena Kagan. Sotomayor criticized the Alito decision as resting on a “false premise” – the idea that police shouldn’t have to choose between getting a warrant for a blood test and dealing with the problems created by a drunk driver. Sotomayor acknowledged that “drunk driving poses significant dangers that Wisconsin and other States must be able to curb,” but she suggested that, under the Fourth Amendment, “the answer is clear: If there is time, get a warrant.”

What’s more, Sotomayor added, Wisconsin cannot rely on the exigent-circumstances exception. Not only has it has never made that argument in the Supreme Court, it has in fact “conceded” that the exception does not justify the blood test in Mitchell’s case.

Justice Neil Gorsuch also dissented. He complained that the justices had granted review to decide whether “Wisconsin drivers impliedly consent to blood alcohol tests thanks to a state statute.” But the Supreme Court didn’t answer that question today, Gorsuch wrote, instead resolving the case on “an entirely different ground.” He would have dismissed the case without deciding it and waited for another case in which the exigent-circumstances exception was squarely presented.