Empirical SCOTUS: So happy together 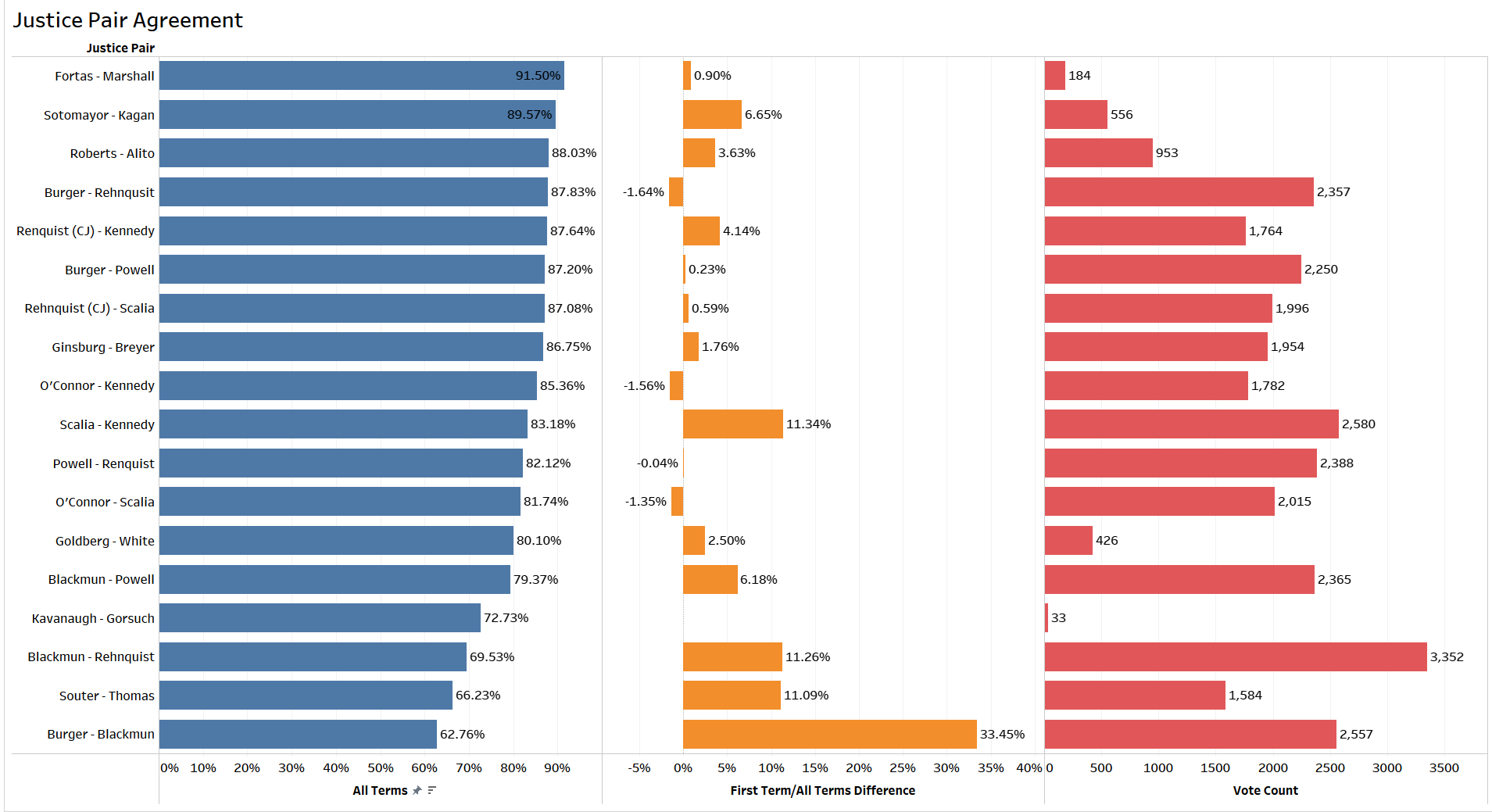 With many decisions still to come in the next month or so, the Supreme Court has already started to define itself in the post-Kennedy era. Certain patterns have emerged in the justices’ voting that distinguish this court from past courts. We are also beginning to see how the newest justices and President Donald Trump’s appointees – Justices Neil Gorsuch and Brett Kavanaugh — are in some ways similar and in others quite distinct.

This term began with significant expectations among conservatives and liberals alike that the Supreme Court would push far to the right. Although such expectations were well-founded, they have not exactly panned out, at least so far. Of the eight 5-4 votes the justices have had in argued cases so far this term, the four liberals have only been in dissent in four, or 50 percent, of them. This might not showcase the power of a conservative bloc vote in the same manner as some expected. Gorsuch, Kavanaugh and Chief Justice John Roberts have also all aligned with the liberal justices in close decisions. This lack of conservative cohesion, especially between Trump’s nominees, has struck some observers as somewhat surprising (although others, like Professor Jonathan Adler, seem less shocked by it).

The numbers reinforce the proposition that Kavanaugh and Gorsuch have not been in consistent agreement so far this term. In fact, if they continue at this rate, they will vote together the least frequently of any two justices in their first terms together appointed by the same president going back to President John F. Kennedy. (In the graphs below, Justice Clarence Thomas’ first full term is treated as 1991. Justice John Paul Stevens is not included because he was President Gerald Ford’s only addition to the court. These statistics are based on whether the justices voted in the same direction or not and do not account for differences through concurrences.) 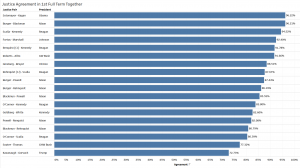 At 72.73 percent agreement, the Gorsuch-Kavanaugh pairing is almost five percentage points lower than the duo with the next least agreement, Justice David Souter and Thomas, a pair who ended up on opposite ideological poles of the court. Although the same is not expected for Gorsuch and Kavanaugh, this early divergence may foreshadow downstream differences between the two.

The top agreeing pair currently sits on the liberal end of the court. This is based on the voting agreement between Justices Sonia Sotomayor and Elena Kagan when Kagan started as a justice in the October 2010 term.

Justices’ first terms on the Supreme Court do not always dictate how well they will agree in the future, however. Some of this might be attributed to the “Freshman Effect”: Among other things, justices are thought to vote with the court’s majority more frequently in their first terms to avoid making early waves on the bench. 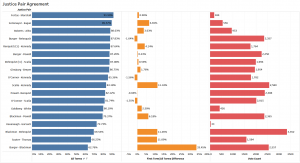 Most of the justice pairings had slight differences in agreement levels from their first terms on the court. Four pairs that had significant disparities were Chief Justice Warren Burger and Justice Harry Blackmun (they voted together 33.45 percent more frequently in their first term together than across their entire careers), Justices Antonin Scalia and Anthony Kennedy, Blackmun and then-Justice William Rehnquist (later chief justice), and Souter and Thomas. Time will tell if Gorsuch and Kavanaugh end up toward the top or bottom of these percentages and to what extent their career numbers differ from those in this term, their first together on the court.

A third way to look at the justice pairs is by how frequently they vote together in the court’s closest decisions, those decided by a 5-4 vote. The graphs below show the agreement levels in the column on the left and the percentage difference in agreements in their 5-4 votes from all of their votes together (The differential column does not include a bar for Kavanaugh and Gorsuch because the term is not yet complete, but their percentage for all votes is quite similar to that of their 5-4 votes.). 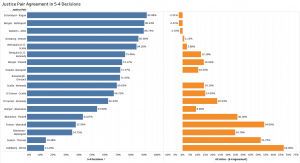 We gather a different perspective on the Supreme Court when we slice the justices as sets of four rather than of two. Here we see how the court’s liberals have voted together with a much higher frequency than any combination of the five more conservative justices on the court. The next figure focuses on these four justice groupings for this term and looks at all votes in the first column, 5-4 votes in the second column, and the percentage of all 5-4 votes when a coalition was in dissent in the third column. 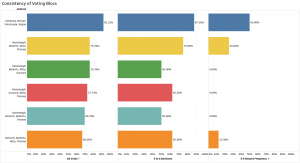 The liberals were in voting agreement over 16 percent more of the time so far this term than any combination of the more conservative justices. The liberals’ agreement rate actually drops a bit for 5-4 decisions. (A good example of surprising voting coalitions that led to these fractures is Stokeling v. U.S., in which Roberts was in dissent with all the liberals except for Justice Stephen Breyer, who was in the majority with the remaining four conservatives.) The conservative grouping with the lowest voting-agreement frequency so far this term is the one composed of the justices aside from Kavanaugh, although Kavanaugh, Gorsuch, Roberts and Thomas have voted together in less than 70 percent of the court’s decisions so far this term. The coalitions’ agreement levels in 5-4 dissents are also notable, with 50 percent or four of eight of the dissents coming from the liberal bloc, and 25 percent or two of eight from Kavanaugh, Roberts, Alito and Thomas.

One final notable feature this term has been Kavanaugh’s frequency in the Supreme Court’s majority. Kennedy was in the majority more than any of the other justices on the court between the 2010 and 2016 terms with a frequency of over 90 percent in all terms except for 2014. So far this term, Kavanaugh is the only justice who has been in the majority in over 90 percent of the cases in which he has voted. 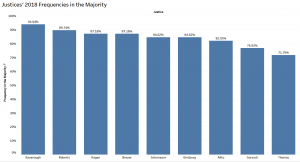 Kavanaugh has been in the majority more frequently than any of his conservative counterparts, including Roberts, who many were projecting to be the new center justice on the court. Interestingly, three of the five more conservative justices — Alito, Gorsuch and Thomas — have the lowest frequencies in the majority so far this term.

Even looking at the other justices’ first full terms (Thomas in 1991, Alito in 2006 and Gorsuch in 2017), Kavanaugh would have the highest frequency in the majority if he kept this rate up for the remainder of the term. 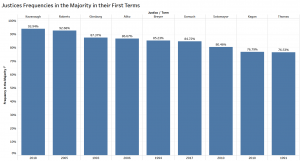 Roberts is the only sitting justice with over 90 percent frequency in the majority in his first full term on the court.

With 34 decisions still outstanding, the court may very well move in different directions at the end of this term. At this juncture, however, few could likely say with confidence that they predicted Kavanaugh and Gorsuch would vote in opposing directions as frequently as they have, that Kavanaugh would be in the court’s majority as often as he has been, or that both Gorsuch and Kavanaugh would act as a swing vote with the liberals in a 5-4 decision.