A “view” from the courtroom: Comity Central 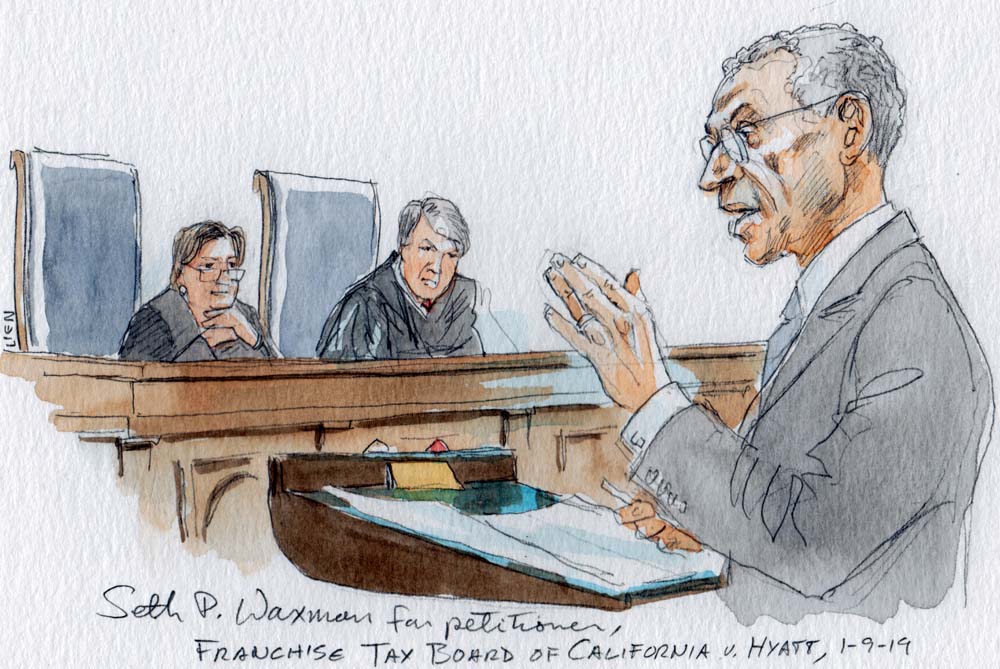 This term of the court has had plenty of arguably boring cases on statutory interpretation, pre-emption and procedure. But every now and then a low-key case comes along that results in an argument amounting to a heady constitutional seminar.

Today’s lone case for argument, Franchise Tax Board of California v. Hyatt, will be one of those. 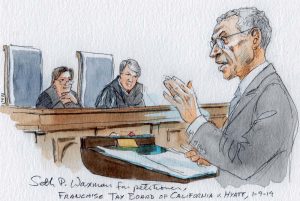 When the court takes the bench, Justice Ruth Bader Ginsburg is again absent as she recuperates from her recent lung surgery. Chief Justice John Roberts, as he did Monday and Tuesday, announces that Ginsburg cannot be present but will participate in today’s case by reading the briefs and transcripts.

There are a few individual lawyers and two groups to be sworn into the Supreme Court bar this morning — one group is from the Social Security Administration, the other the U.S. Postal Service. Both agencies are operating during the partial federal government shutdown, so Social Security checks are still being mailed and delivered.

The federal courts, including the Supreme Court, are running on fiscal fumes at this point. The Administrative Office of the U.S. Courts issued a statement Monday that revised its original estimate and said it now is working toward a goal of sustaining paid operations through January 18. After that, the judiciary will operate under the terms of the Anti-Deficiency Act, which will allow “mission critical work” to continue. What that means for the Supreme Court has been left a bit undefined, but most people expect the court to get through its next week of arguments and the non-argument court session the following Monday, which is followed by a four-week recess.

The court proceeds to the day’s argument, which comes in a case that is before the justices for a third time. The Franchise Tax Board has been pursuing Gilbert Hyatt in a tax dispute since the early 1990s. Hyatt was a longtime California resident, but he claims he moved to Nevada in 1991. California contends he didn’t move until 1992, and thus owed some $10 million in taxes on his substantial 1991 income from technology patents.

Hyatt sued the California agency in Nevada state courts, claiming damages for what he considered the board’s abusive audit and investigation practices, including rifling through his private mail and combing through his garbage. He won close to $500 million in total damages and fees. Subsequent proceedings have brought the damages amount down to $100,000.

The issue for the Supreme Court this time around is a question on which the court deadlocked in 2016, after Justice Antonin Scalia’s death: Whether Nevada v. Hall, a 1979 Supreme Court ruling that said a state could be haled into another state’s courts without its consent, should be overruled.

Seth Waxman, the attorney for the Franchise Tax Board, opens his argument by reaching back to the Founding Fathers.

“The participants in the ratification debates disagreed about whether the new constitution would or should subject states to suit in the new courts of the soon-to-be superior sovereign, but they were unanimous in their understanding that states could not be sued in the courts of other states,” he says, referencing Hamilton, Marshall, James Madison and Edmund Randolph.

So Sotomayor is now a textualist?

Waxman says that state sovereign immunity derives from the original structure of the Constitution. He and several justices will repeatedly refer to the idea that the states respected each other’s sovereignty as a matter of comity.

There are so many references to the principle of courteous and considerate behavior that one school-aged child who observed the argument will ask her father, in the court’s cafeteria afterwards, “Why did they keep talking about comedy?”

Justice Stephen Breyer, who wrote the court’s 2016 decision that decided a separate question in the long-running case, refers to his research for that decision and says that John Marshall “was a pretty good authority” on a particular point.

“I happen to know this because we had this case before,” Breyer says.

“You did?” Waxman says breezily, in mock surprise. The former U.S. solicitor general always argues with a certain level of confidence, to the point where he is sometimes able to adroitly stave off a justice’s attempt to interrupt him with a question.

Justice Brett Kavanaugh, who delivered his first opinion on Tuesday, asks Waxman why, if the state sovereign immunity at issue here is so important, “is it not in the text of the Constitution in your view, given that the Constitution is a document, in my view, of majestic specificity.”

“It’s got a lot of specific details on very minute things, and this issue which you say rightly is so important, but then somehow was not mentioned in the text of the Constitution,” Kavanaugh continues.

Waxman replies that the principle of state sovereign immunity “is no different than Chief Justice Marshall’s recognition in McCulloch versus Maryland of the constitutional principle of intergovernmental immunity, [or] of the principle against commandeering that’s recognized by the court in Printz and New York versus United States.”

Erwin Chemerinsky, the dean of the law school at the University of California, Berkeley, is representing Hyatt. He opens with some standup comity.

Sotomayor tells him, “I just don’t see comity being enough.”

Kavanaugh asks Chemerinsky about Federalist 81, “which said that it was inherent in the nature of sovereignty not to be amenable to the suit of an individual without its consent and said that would remain with the states.”

“That was Hamilton speaking in Federalist 81, reflecting a notion that it’s inherent in the nature of sovereignty,” Kavanaugh says.

Chemerinsky says that “Hamilton was providing assurance to the states that they wouldn’t be held liable in federal court. That’s what the Eleventh Amendment was about, overruling Chisholm versus Georgia. It was about limiting the power of the federal courts relative to state governments. … In Nevada versus Hall, this court said sovereign immunity existed to protect a government from being sued in its own courts. It was only comity that protected other states from being sued.”

Lin-Manuel Miranda, the creator of the Broadway smash “Hamilton,” would probably enjoy this argument. He was in the courtroom last spring when the justices heard Trump v. Hawaii, about the president’s U.S. entry restrictions. But this week he is in Puerto Rico to reprise his lead role in the musical, which opens Friday for 23 performances.

The constitutional seminar continues with discussions of stare decisis, whether state attorneys general truly represent the interests of their states, and whether it is incongruous that Indian tribes have the immunity from being haled into state courts that the states themselves don’t currently have.

Late in the argument, Justice Samuel Alito asks about the implications if California were its own republic.

“If we had the California republic, which is something some people in California would like, it would have a lot of leverage over Nevada that it doesn’t have now, wouldn’t it?” Alito says. “Nevada would have to be careful about what it did to California. But the situation now is different because they’re states in the union.”

Chemerinsky says, “I think Nevada might already feel that California overwhelms it too much.”

The court’s mission critical work will continue next week, all in a spirit of comity.