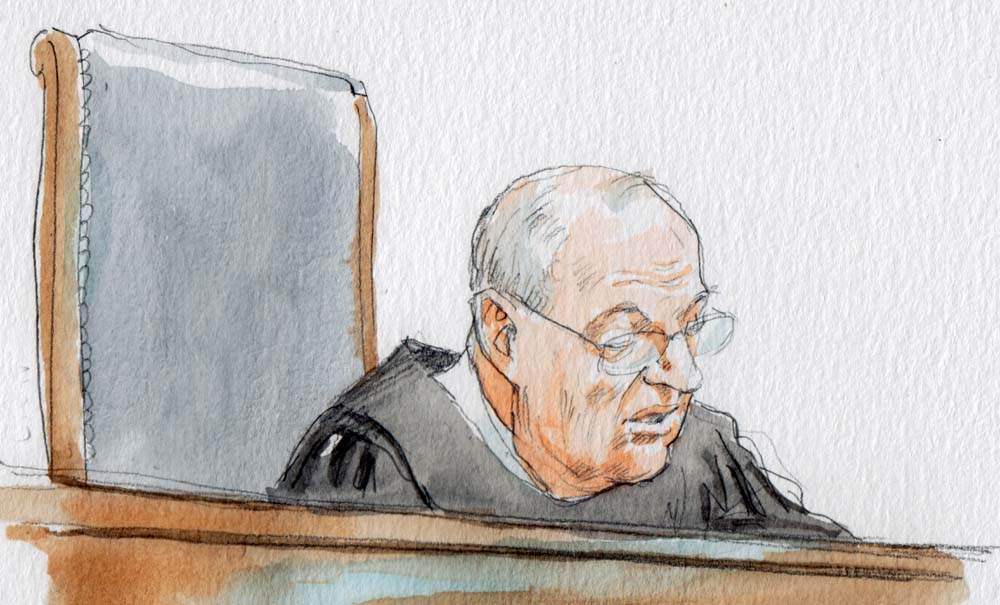 The justices have all released statements addressing the retirement of Justice Anthony Kennedy. We reproduce the full texts of those remarks below the jump:

Justice Anthony Kennedy served the country he loved for 43 years in the Judicial Branch – 30 as a Member of this Court. His jurisprudence prominently features an abiding commitment to liberty and the personal dignity of every person. Justice Kennedy taught collegiality and civil discourse by example. He brought his wise counsel outside the courthouse and around the world through teaching, lectures, and discussions focused on the rule of law and the necessity of civic engagement. An individual of unquestioned independence and integrity, he is equally comfortable discussing the Greek philosophers or telling tales of Old Sacramento. His wife Mary is a treasured member of the Court family — warm, vibrant, and discerning. I look forward to seeing much of both of them in the years ahead.

I am deeply, deeply saddened to see Justice Kennedy leave the Court. We have been colleagues here at the Court for over a quarter of a century. Throughout that time, he has been a consummate gentleman and a wonderful colleague. And, he has been unfailingly civil and kind in all of his interactions with each of his colleagues. Even during the most difficult and challenging times, he had a way of elevating each of us by his example. He is a good man who will be remembered not only for a long and productive career on the bench but also for the way he conducted himself. It is an honor to have served on the Court with him and to know him as a friend. Virginia and I wish him and Mary nothing but the best.

Justice Kennedy is a true gentleman, a caring jurist, and a grand colleague in all respects. I will miss the pleasure of his company at our Conference table, his helpful suggestions on circulating opinions, his recommendations of art exhibitions to visit with my chambers staff, and much more. For the good he has done during the 43 years he has served as a member of the Federal Judiciary, he has earned a rousing Bravo.

Justice Kennedy has been my friend and judicial colleague for close to twenty-five years. He is a judge of great vision. His knowledge of the Constitution is profound. He is thoughtful and careful in his decision-making, and he has made it a great pleasure for all of us to work together with him. I will miss him as a colleague, but I hope to continue to see him for many years as a friend.

It has been a great honor to serve with Justice Kennedy for the past 12 ½ terms. Tony was warm and welcoming when I arrived at the Court on my first day, and it has been a pleasure to work with him ever since. I could not have hoped for a more congenial and considerate colleague, and I will miss working with him. His work has made an impressive contribution to the development of the law in many fields, and he will surely be remembered as one of the most important justices in the history of the Court.

Tony Kennedy is one of the most thoughtful colleagues I have known. He is passionate about the Constitution and our Court and has been a devoted member of our Court community. It is undeniable that he has had a monumental effect on the law. I have witnessed his love and dedication to his family and know that he will cherish spending more time with them. I will miss working with him dearly, but I know he will continue to be a roaring lion, even as he takes senior status.

I am deeply grateful to have had the chance to serve on the Court with Tony Kennedy. His legacy will be of enduring importance. The Court and country will miss his wisdom, his independence and integrity, his love of liberty and commitment to personal dignity. And I’ll miss his kindness, decency, and warmth. He was the best colleague imaginable. I wish Tony and Mary the best of everything in the years ahead, and look forward to their continued friendship.

For more than forty years, Justice Kennedy has served the Judiciary and the Nation with unfailing integrity and immense wisdom. He is a model of civility, judicial temperament, and kindness. His respect for every person and every case has made him a great man and a great judge. It was the honor of a lifetime to serve as his law clerk 25 years ago, and it has been an unexpected joy to serve this year as his colleague. I also want to extend my gratitude to the Justice’s wife, Mary. Her graciousness has left an indelible mark on my family and everyone she touches. I wish the Justice and Mary, and their wonderful family, every happiness in the years ahead.

Tony Kennedy was, and is, a close friend. We have retained that close friendship since my retirement, and I continue to admire his independence, the high quality of his judicial work, and his devotion to the mission of the Court. I am, of course, disappointed by his decision to retire for he will not be easily replaced, but he has certainly earned the right to enjoy a more leisurely life without the constant burden of reading briefs. I wish him and Mary all the best.