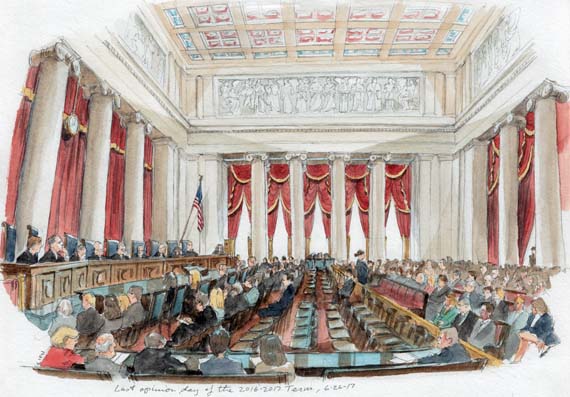 This morning the Supreme Court ruled that a Minnesota woman should not receive the money from her ex-husband’s life insurance policy even though she was still his beneficiary when he died in 2011, four years after their divorce. The man’s children had argued that they should get the money because a state law passed in 2002 specifies that when one spouse designates the other as his life-insurance beneficiary, that designation is automatically revoked if the couple divorces. By a vote of 8 to 1, the justices agreed, rejecting the woman’s argument that the 2002 law violates the Constitution’s contracts clause, which bars the states from enacting any laws “impairing the obligation of contracts.”

The ruling came in the case of Ashley and Antone Sveen, whose father Mark married Kaye Melin in 1997. After 10 years of marriage, the couple divorced – but Mark did not change his designation of Kaye as the primary beneficiary of his life-insurance policy before he died. Pointing to the 2002 law, Ashley and Antone claimed that they should receive the money, but a federal appeals court ruled for Kaye, on the ground that applying the law to a policy that was in effect before the law was enacted would violate the contracts clause.

Today the Supreme Court, in an opinion by Justice Elena Kagan, reversed. Kagan began by conceding that the contracts clause limits the states’ power to pass laws that interfere with pre-existing contracts, but she stressed that such restrictions are not absolute. To determine when a law “crosses the constitutional line,” she explained, the court first examines whether the law substantially impairs the relationship created by the contract.

Here, Kagan concluded, the Minnesota law does not – and therefore passes muster. First, Kagan acknowledged that the law does change the beneficiary designated by the policyholder. But, she stressed, legislators passed the law because they wanted to take into account what the policyholder would have wanted. And although “there are exceptions,” she posited, most people who get divorced don’t want their money to go to their former spouses; they simply forget to change their beneficiary designations.

Second, Kagan continued, it’s not very likely that policyholders will even assume that their beneficiary designations will remain unchanged after a divorce. This is especially true, she noted, because “divorce courts have wide discretion to divide property” – including life insurance policies – “between spouses when a marriage ends.”

Third and finally, Kagan pointed out, it is easy for a policyholder who wants to keep his former spouse as a beneficiary even after divorce to do so: All he has to do is notify his insurance company – an obligation that falls easily within the kind of “minimal paperwork burdens” that the Supreme Court has allowed other laws to impose without violating the contracts clause.

Justice Neil Gorsuch was the lone dissenter. He acknowledged that the “judicial power to declare a law unconstitutional should never be lightly invoked.” In his view, though, the court should have done exactly that because “the framers were absolute” when they drafted the contracts clause: If a law creates any impairments to a contract, it violates the clause – no exceptions. But even if you agree that the contracts clause only bars substantial impairments, he continued, the Minnesota law here still violates the Constitution, because a policyholder’s choice of a life-insurance beneficiary is “the whole point” of the policy.

Gorsuch also suggested that the reasoning on which the court relied to uphold the law is inconsistent. On the one hand, he noted, the court contended that the law is based on the premise that policyholders may forget to update their beneficiary designations after their divorce. That rationale, he argued, cannot be reconciled with the court’s assertion that the policyholder who wants to keep a former spouse as his beneficiary can simply notify the insurance company to that effect. “The statute,” Gorsuch asserted, “cannot simultaneously be necessary because people are inattentive to the details of their insurance policies and constitutional because they are hyperaware of those same details.”