A “view” from the courtroom: Justice Kennedy’s Master-pièce de résistance 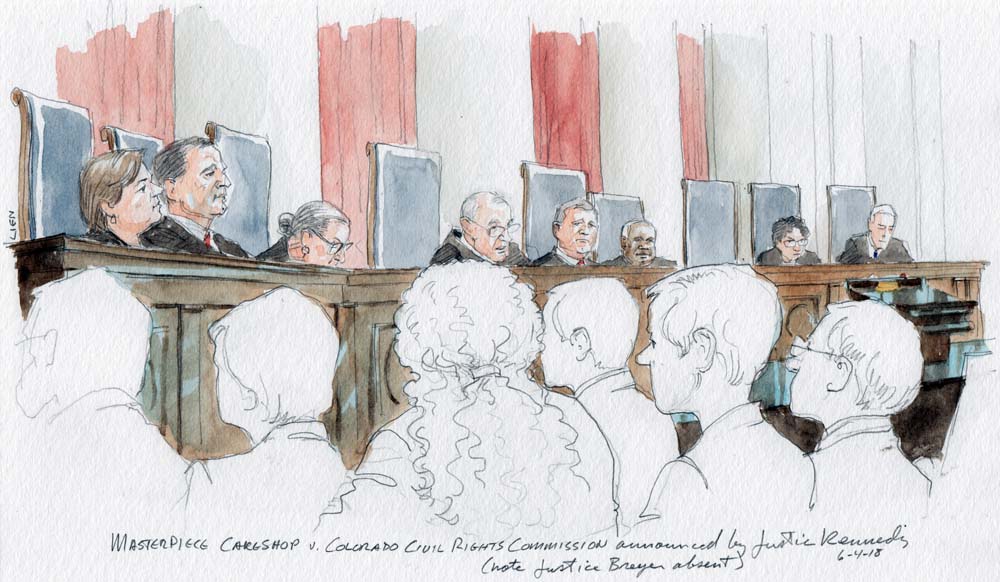 It’s the first opinion day of June in this very busy term. The court has 29 argued cases to finish, many of which are in the blockbuster category.

Both the bar section and the public gallery are full. As it turns out, some general-public seats are being taken up by part of a large cohort of Harvard Law School alumni who will be sworn into the Supreme Court Bar at the end of this morning’s session. Other groups being sworn in today are from the Illinois State Bar Association and the Phi Alpha Delta law fraternity, although those contingents are fully contained in the bar section of the courtroom. 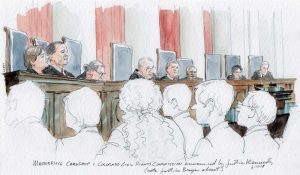 When the court takes the bench at 10 a.m., Justice Stephen Breyer is absent. On Friday, he was at the graduation ceremony for the New York Law School, where he received an honorary degree and delivered an address. As we watched online, we kept hoping someone would straighten out the wrinkles and twists in the academic hood that administrators had placed around Breyer’s neck, but no one did.

Breyer spoke eloquently on several topics, including his discussion of Albert Camus’ “The Plague” as a metaphor for French resistance to the Nazi occupation of France. We wondered whether Breyer, a known Francophile, has read Camus’ work in the original French, as we were required to do in high school, both for “The Plague” (“La Peste”) and “The Stranger” (“L’Étranger”). “Pensez en français,” Mademoiselle Dominique would say. If you’re going to start thinking in a foreign language, why not start with something easy like an existentialist, metaphorical work.

Chief Justice John Roberts announces, in English, that Justice Sonia Sotomayor has the court’s opinion in Lamar, Archer & Cofrin LLP v. Appling, about what constitutes “a statement respecting the debtor’s financial condition” under a provision of the Bankruptcy Code.

After describing the background to the case, Sotomayor says, “Sounds boring, doesn’t it?” There is some nervous chuckling throughout the courtroom. She writes for a unanimous court that the language of the statute makes plain that a statement about a single asset can be a “statement respecting the debtor’s financial condition,” and the lower court ruling in favor of a debtor is affirmed.

Justices Clarence Thomas, Samuel Alito and Neil Gorsuch do not join part III-B of Sotomayor’s  opinion, and although there is no explicit explanation, that section is about legislative history.

Justice Anthony Kennedy appears to be reading over some papers during Sotomayor’s brief summary. And, indeed, he has the next opinion, in Hughes v. United States. This is a case about the federal sentencing guidelines in which the justices also asked for briefing on how the lower courts should interpret a previous on-point sentencing decision with no majority opinion in light of the Supreme Court’s general principle, announced in 1977 in Marks v. United States, that in splintered decisions with no majority, the holding of the court “may be viewed as that position taken by those members who concurred in the judgments on the narrowest grounds.”

Naturally, some court observers were hoping that the court would be so splintered in Hughes that lower courts would have to rely on the narrowest concurrence to interpret a decision about interpreting decisions. But today, there is a majority for the underlying legal question in Hughes that had escaped the court in the earlier sentencing-guidelines case, 2011’s Freeman v. United States.

That makes it “unnecessary to discuss how Marks should be interpreted,” Kennedy says. A total of six justices agree that the petitioner in this case, Erik Lindsey Hughes, is eligible for relief, though it will be up to the district court to decide if he actually will get any. Roberts has filed a dissent, joined by Thomas and Alito. (Sotomayor joined Kennedy’s opinion but filed a concurrence.)

Now, for the second time this term, the court will depart from its normal practice of announcing opinions in reverse order of seniority, but with good reason. (The first was on April 24, with two related patent decisions, one announced by Thomas, in Oil States Energy Services LLC v. Greene’s Energy Group LLC, followed by one announced by Gorsuch, in SAS Institute Inc. v. Iancu, that was dependent on a holding of Oil States.)

Alito has the opinion for a unanimous court in Koons v. United States, which references Hughes and holds that five convicted criminals do not qualify for sentence reductions.

The chief justice then says that Kennedy has the opinion in Masterpiece Cakeshop Ltd. v. Colorado Civil Rights Commission. It seems that everyone in the courtroom, from Harvard Law alumni to everyday tourists, recognizes this case caption and shifts in their seats a bit.

Kennedy is one justice who hesitates to announce the outcome right off the bat, and today is no different. He briefly outlines the background of the case about baker Jack Phillips, who refused on religious grounds to create a custom wedding cake for the reception of same-sex couple Charlie Craig and David Mullins.

The case “presents difficult questions as to the proper reconciliation of at least two principles,” Kennedy says from the bench. The first is the authority of a state and its governmental entities to protect the rights and dignity of gay persons who are, or wish to be, married but who face discrimination when they seek goods or services. And the second is the right of all to exercise fundamental freedoms under the First Amendment, including the freedom of speech and free exercise of religion.

It is “unexceptional” that Colorado can protect gay people in acquiring whatever products and services they choose on the same terms and conditions as are offered to other members of the public. “Our society has come to the recognition that gay persons and gay couples cannot be treated as social outcasts or as inferior in dignity and worth,” he says.

But Phillips argues that he has to use his artistic skills to make an expressive statement through the custom cake sought by the same-sex couple, “a wedding endorsement in his own voice and of his own creation.” Such a request implicates his deep and sincere religious beliefs.

Kennedy keeps teetering from principles favoring one side or the other. “The court’s precedents make clear that the baker, in his capacity as the owner of a business serving the public, might have his right to the free exercise of religion limited by generally applicable laws,” he says.

“Yet,” Kennedy adds, tottering to the other side, “the baker was entitled to a neutral decisionmaker who would give full and fair consideration to his religious objection.”

And this is where the teeter-totter comes to a rest.

“The delicate question of when the free exercise of his religion must yield to an otherwise valid exercise of state power needed to be determined in an adjudication in which religious hostility on the part of the state itself would not be a factor in the balance the state sought to reach,” Kennedy says. “That requirement, however, was not met here. When the Colorado Civil Rights Commission considered this case, it did not do so with the religious neutrality that the Constitution requires.”

He continues a bit before concluding with language from near the end of his written opinion. “The outcome of cases like this in other circumstances must await further elaboration in the courts, all in the context of recognizing that these disputes must be resolved with tolerance, without undue disrespect to sincere religious beliefs, and without subjecting gay persons to indignities when they seek goods and services in an open market,” he says.

Ginsburg has donned her dissent jabot today, but she does not read any part of her dissenting opinion in court.

The nuances of the opinions in Masterpiece will be plenty challenging to contemplate, even thinking in English.

Marshal Pamela Talkin announces, after bar admissions, that the court is adjourned “until Monday next.”

As Mademoiselle Dominique would say, “À bientôt.” (See you soon.)