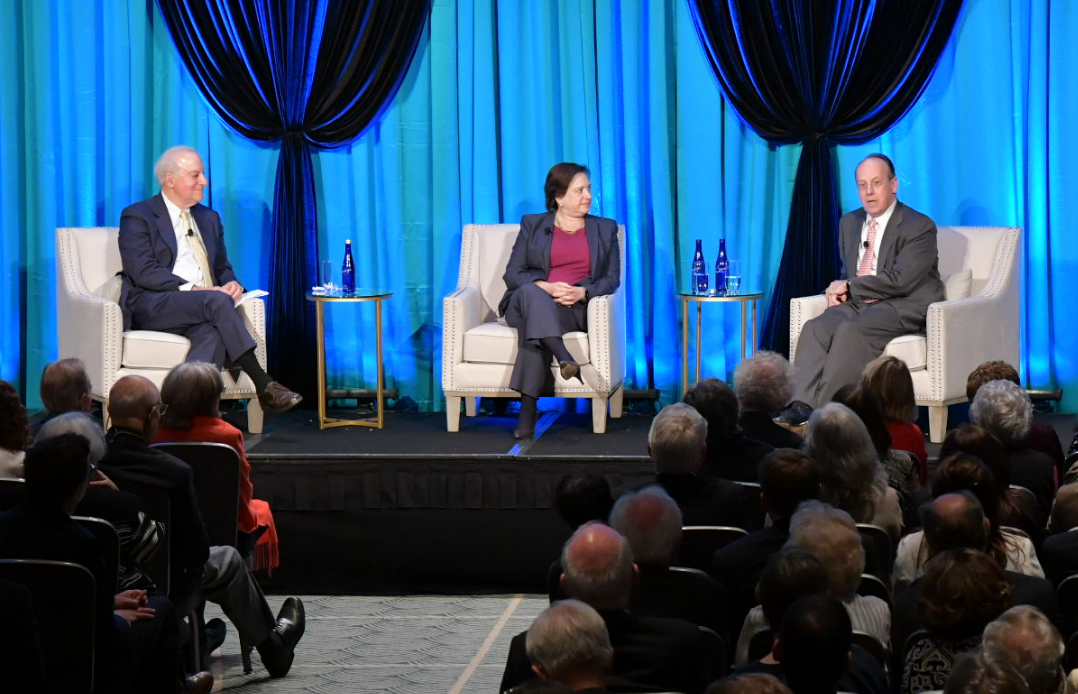 On Monday morning Justice Elena Kagan joined Justice Ruth Bader Ginsburg’s dissent from the Supreme Court’s majority opinion in Epic Systems Corp. v. Lewis, which held that arbitration clauses in employment contracts that require employees to forgo class and collective actions are enforceable. On Monday evening Kagan spoke at the American Law Institute’s 95th annual meeting with a fellow former solicitor general, Paul Clement – the attorney who argued for the winning side in that case.

As Justice Antonin Scalia – Kagan’s former colleague and Clement’s former boss – famously said to those who disagreed with the Supreme Court’s decision in Bush v. Gore, “Get over it.”

Kagan and Clement both spoke fondly of the former justice. “I loved my repartee with Justice Scalia,” Kagan recalled. “He was sometimes aggressive but always totally straightforward and honest.” 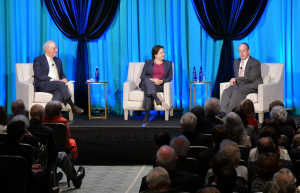 “It was empowering for the advocate,” remarked Clement, who has argued more than 90 cases before the Supreme Court. Kagan smiled and nodded when Clement called arguing in front of Scalia “one of the great joys an advocate can have.” The justice was persuadable and open to push-back, Clement said; “there was nothing you couldn’t say back to him.”

“There was one thing you couldn’t do back to Justice Scalia,” Kagan remembered. She recalled a series of questions from Scalia “in one of the least important cases” that she argued as solicitor general. At a certain point she responded with a question of her own.

“That’s not the way we do things here,” Chief Justice John Roberts intervened.

Kagan told the story of the first appellate argument in her life – none other than the reargument in Citizens United v. Federal Election Commission, in which the Supreme Court ruled that political spending by corporations is a form of protected speech under the First Amendment.

Kagan said that after she uttered about one “anodyne” sentence on the history of campaign-finance regulation, Scalia interrupted her:

“He basically told me I was all wrong,” Kagan recalled, but “it was the best thing for me,” calming her nerves by drawing her into the argument.

That Citizens United was Kagan’s first argument – which elicited some gasps of surprise from members of the audience – underscored what Kagan said she told the Obama administration when informed she was being vetted for the position of solicitor general, “I’m not sure you have the right person.”

At the time, Kagan was dean of Harvard Law School. This experience, while not exactly preparing her for the advocacy required of the solicitor general, Kagan suggested, did accustom her to the decision-making role of the office.

“Getting people around the table,” Kagan said, was “one of the more fun parts of the job.”

There was one difference. As dean, Kagan said, she often tried to make compromises to keep people at the law school happy. As solicitor general, compromises often weren’t possible in the same way. “I realized pretty quickly that people appreciated being listened to but everybody got that it was my decision to make,” Kagan said.

When it sank in that people would respect her decision-making – “that was really fun.”

One type of decision that a new solicitor general has to make, particularly at the beginning of an administration, is whether to maintain the same positions as the previous administration, even one controlled by a different political party.

“The office has a real culture and a real ethos to it,” Kagan indicated. The attorneys were “very clear that you were supposed to think long and hard and then long and hard again before you change anything.”

“Changing positions is a really big deal,” she continued, “and people should hesitate a long time over it,” because the role of the office is “seeing the long-term interests of the United States” and the “credibility of the office depends on judges believing that’s what you’re doing.”

Kagan gave no indication that these comments had anything to do with current cases, but in Epic Systems, the solicitor general’s office changed its position after the transition from the Obama to the Trump administration.

Kagan said that Justice Thurgood Marshall, for whom she clerked, “made me want to do right by the office and by him” when she became solicitor general.

Kagan recalled that Marshall considered the job to be the best he ever held, topping his positions as an associate Supreme Court justice and as a litigator with the NAACP Legal Defense and Educational Fund. He used to tell the “story of how meaningful it was for him to go up to the podium and say, ‘I’m Thurgood Marshall and I’m representing the United States of America.’”

One audience member asked how Kagan could “maintain normalcy” despite “heavy responsibility that would keep most people up all night.” “Who says I do?” Kagan quipped, but she then suggested that the quantity of decisions is actually helpful. One would like to consider everything to the fullest extent, “but at some point, I have to decide,” and after making a decision, “I don’t think about it anymore.”

Clement agreed with Kagan’s claim, noting that the solicitor general has to make thousands of decisions. He asked if it was any different as a justice.

“Are you suggesting something about our caseload?” Kagan responded.

The justices have 32 remaining argued cases to decide before the end of June.