A “view” from the courtroom: Open for business, with a hiccup 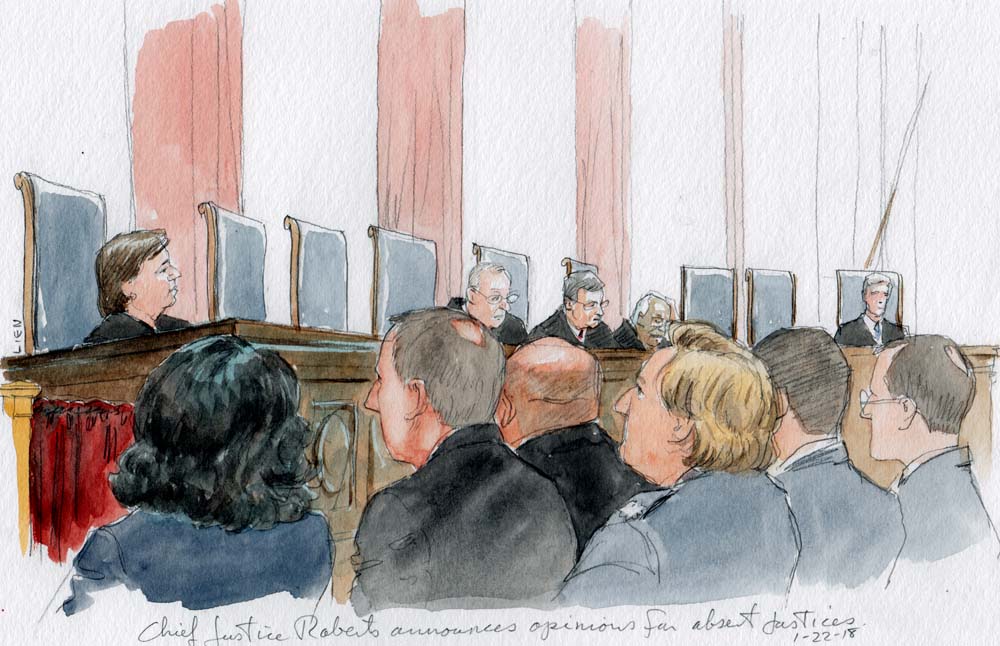 Today is the first weekday of the federal government shutdown, but few court-watchers are surprised that the Supreme Court is open for business.

As Andrew Hamm reported for this blog on Sunday, the court operated as usual during the 2013 and 1995 government shutdowns, even conducting its entire two-week argument session in October of 2013. Although the federal courts get some of their budgets from a congressional appropriation, they can operate for about three weeks on court-fee balances and other funds, according to the Administrative Office of the U.S. Courts.

Today is a scheduled day for orders and opinions for the Supreme Court, after which the court is taking its four-week midwinter recess.

So, the justices take the bench as normal at 10 a.m. Or at least five of them do. Four are absent, which is not unusual for these non-argument sessions.

Justice Ruth Bader Ginsburg is on her way back from the Sundance Film Festival in Park City, Utah, where over the weekend she participated in a festival interview session related to the festival premiere of the documentary “RBG.” She was introduced by Sundance founder Robert Redford and interviewed by NPR’s Nina Totenberg. Among the newer nuggets of information to emerge were two of Ginsburg’s favorite recent movies. She cited “Three Billboards Outside Ebbing, Missouri” and “Call Me By Your Name.”

Justice Stephen Breyer is speaking this evening at the University of North Florida, in Jacksonville.

Justice Sonia Sotomayor is absent not because of her minor health scare on Friday related to her diabetes (paramedics were called to her apartment over concerns about her blood-sugar level), but because she is headed to Seattle for a civics education event, the court’s Public Information Office says.

Justice Samuel Alito is absent today as well, and we have no information about his whereabouts.

The bar section of the courtroom is pretty full, with many lawyers scheduled to be sworn in as members of the Supreme Court Bar. That’s where today’s hiccup will come a little later.

The public gallery is sparsely attended, with only about two rows filled, and many of those people appear to be guests of the bar admittees. Even though this is one of the few government buildings open for business (although Smithsonian museums are open through today), it is not quite high season for visiting student groups.

The chief justice announces that Sotomayor has the opinion today in National Association of Manufacturers v. Department of Defense.

“She’s asked that I read the opinion for her,” Roberts says.

The case is about whether challenges to a federal regulation known as the “waters of the United States” rule must be filed in federal district courts. That is where the NAM filed its challenge to the rule promulgated by the Environmental Protection Agency and the Army Corps of Engineers. The federal government argued that such challenges must be filed in the federal courts of appeals under the Clean Water Act’s enumeration of seven categories of EPA actions for which judicial review lies exclusively in the appeals courts.

“The parties have asked us to wade in” to the question, the chief justice says, with the pun eliciting chuckles throughout the courtroom. He makes clear fairly quickly that the court has sided with the NAM and that challenges to the WOTUS rule must be filed in the federal district courts.

Roberts’ reading of Sotomayor’s summary includes several other water-related puns, such as a reference to the government seeking to keep its interpretation “afloat” by turning to some theory or authority. Some of the wordplay appears in the written opinion and some doesn’t. We think the puns originate with Sotomayor, and not the chief justice.

Roberts declares that the decision is unanimous. (So, we are still awaiting an instance when the chief justice announces an opinion for an absent justice in which he is in the minority.)

Next, Roberts says that “Justice Ginsburg has our opinion today in Artis versus the District of Columbia.” He does not mention whether Ginsburg has asked that he read her summary. He just starts reading it.

The case is a fairly technical one about the time for refiling a claim under the supplemental jurisdiction statute. The court holds that the statute’s instruction to “toll” a state limitations period means to hold it in abeyance, or stop the clock. The decision is 5-4, with the chief justice joining the court’s liberal bloc to form the majority, and Justice Neil Gorsuch filing a dissent joined by Justices Anthony Kennedy, Clarence Thomas and Alito.

Roberts next says with a smile that “Justice Thomas has our opinion today in District of Columbia versus Wesby, and he’s going to announce it himself.”

This is a case about whether police officers in the nation’s capital had probable cause to arrest attendees at a raucous “bachelor party” in an unoccupied house.

The facts of this case provided for one of the livelier arguments of the term back in October. And while Thomas sometimes has a knack for draining all of the fun aspects of a case out of the opinion announcement, that’s not true today.

From the bench, he refers to an “utter bacchanal” involving “strippers,” “lap dances” and casual sex on a mattress in the bedrooms, with used condoms strewn about.

Some partygoers believed they were invited by a hostess known as “Peaches,” who it turns out was not at the party and was not authorized to use the house. When the police arrived in response to a neighbor’s complaint, partygoers scattered. The police reached Peaches on the phone, and she claimed to be renting the house. But when the police reached the home’s owner, he said there was no such agreement and the party was not authorized. The police then arrested 21 partygoers for unlawful entry. (Charges were dropped, and 16 of the partygoers sued for false arrest.)

With that, the court moves to its normally routine ritual of swearing in new members of the bar.

Clerk of the Court Scott Harris introduces a few individual admittees, and then a large group from the U.S. Air Force Judge Advocate General corps. But there are about six or seven others seated with the other bar admittees who have slightly mystified looks on their faces when Roberts gives his traditional welcome to the new bar members and Harris swears in the acknowledged groups.

When the swearing-in concludes, Marshal Pamela Talkin bangs her gavel to end the court session and everyone stands, including the justices. But as this is going on, Roberts and Harris are trading looks that suggest they are aware that one group of admittees has been overlooked.

The chief justice raises his hands slightly and says, “I’m sorry, we’re not quite ready to adjourn.”

Harris says, “We have one more group.”

Everyone settles back down as the neglected group is announced and then sworn in.

And then, the five justices head for the curtains, ready to begin their midwinter recess.

Talkin announces that court will next meet on February 20.

It goes unsaid that that will happen assuming funds are available.