A “view” from the courtroom: Must be in the front row 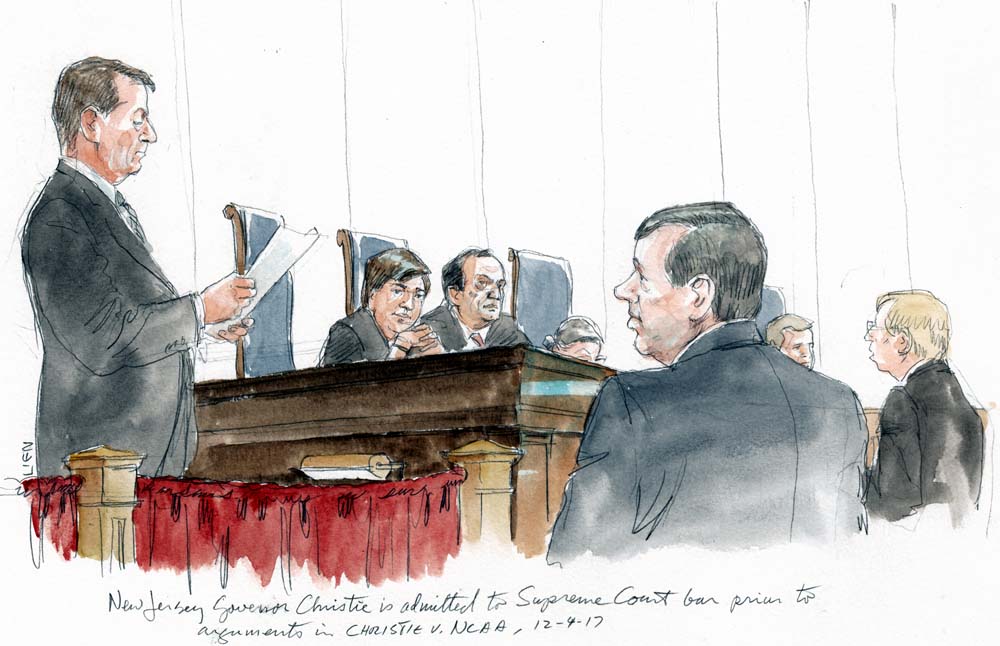 Governor Christie is admitted to the Supreme Court bar prior to arguments in Christie v. NCAA.
Share

As we enter the courtroom for today’s argument in Christie v. National Collegiate Athletic Association, we are hopeful we can identify where Gov. Chris Christie of New Jersey is sitting so we can analyze his reactions to the case about sports betting.

Often the lead petitioner is seated on the far side of the courtroom, away from the press section. But not today. The governor is seated in the front row of the bar section, in the seat that abuts the first press row

Gov. Chris Christie is admitted to the Supreme Court bar prior to arguments in Christie v. NCAA. (Art Lien)

We politely muscle into Christie’s conversation with his neighbors to inquire whether he is a member of the Supreme Court bar.

“I will be in a few minutes,” he tells us. It seems that Theodore Olson, the former U.S. solicitor general under President George W. Bush, has employed one of the inside tricks to get some extra courtroom seats.

Meanwhile, Christie yells (not too loudly) to some fellow New Jerseyans across the courtroom to say that one of them has “the Uecker seats.” The reference is to onetime Major League Baseball player, broadcaster and commercial actor Bob Uecker, whose tagline was “I must be in the front row” when actually he was relegated to the nosebleed section.

Christie, though, is definitely in the front row.

In the last row of the bar section, New Jersey state Sen. Raymond Lesniak, a Democrat representing cities such as Union and Elizabeth, grabs us to claim some credit for his role in the case. Lesniak sponsored the 2014 measure that repealed the state’s laws against sports betting, which the U.S. Court of Appeals for the 3rd Circuit held violated the federal Professional and Amateur Sports Protection Act.

Also sprinkled throughout the courtroom today are several proponents of legalized sports betting, including Sara Slane, the senior vice president of the American Gaming Association, which represents casinos; and Daniel Wallach, a Fort Lauderdale, Fla., lawyer and expert on gaming law and sports law.

Both of them participated in a briefing that gaming industry interests held last week in Washington. Their optimistic view was that PASPA was likely to go down and that legalized and regulated sports betting was ready to explode across the country.

“This is the Thrilla in Manilla,” Wallach said at that briefing, referring to today’s case.

If this is the championship bout in this long-running case, the boxers have been going at it for years. Olson represents New Jersey officials, and Paul Clement, another former George W. Bush solicitor general, represents the NCAA, Major League Baseball, the National Hockey League, the National Football League and the National Basketball Association.

In their corners, or at their counsel tables, Olson has his longtime partner at Gibson Dunn, Matthew McGill. At Clement’s side is Jeffrey Mishkin of Skadden Arps. (Clement is with Kirkland & Ellis.)

Deputy Solicitor General Jeffrey Wall will also argue in support of Clement’s side and PASPA today.

Missing from the courtroom are any of the commissioners of the sports leagues, who have passed up the opportunity to be here. (The pro-gaming interests are more than happy to point out that the traditional bedrock stance of the sports leagues against legalized sports betting appears to be eroding ever so slightly, with the NHL and NFL putting teams in Las Vegas and NBA Commissioner Adam Silver calling for legalized and closely regulated sports wagering.)

Christie, who will step down as governor next month after eight years in office, has more than enough charisma to fill the courtroom. When the justices take the bench at 10 a.m., Chief Justice John Roberts recognizes Olson to move the admission of Christie and three other New Jersey lawyers to the Supreme Court bar.

After Christie and multiple other new bar members are sworn in, the governor sits still in his chair for an hour and lets the arguments about the 10th Amendment, commandeering, illegal sports betting and other matters unfold.

Only when he gets outside to the press cameras can the governor be himself again, overshadowing Olson to some degree and parrying with reporters over some of the fine points, but also addressing concerns such as the potential mob influence on sports betting. “It’s not like we don’t know about organized crime in New Jersey,” Christie says, adding that legal forms of betting are easier to control than illegal forms.

And soon, the governor and his entourage get into their motorcade and are off.