A “view” from the courtroom: The investiture of Neil Gorsuch 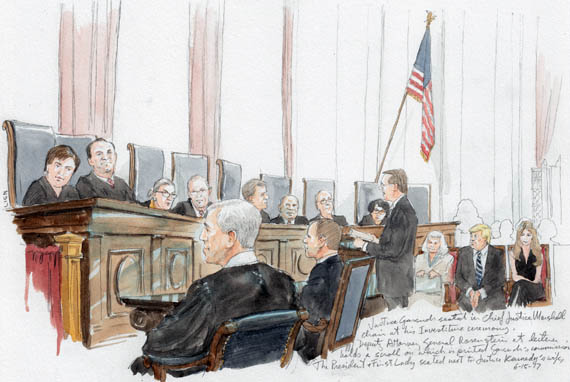 Justice Gorsuch seated in John Marshall's chair at his investiture attended by the President and First Lady. Deputy Attorney General Rosenstein is at lectern with scroll.
Share

Justice Neil Gorsuch was confirmed to the Supreme Court over two months ago, and he has already written his first opinion, on Monday of this week. But getting a bunch of important people in the same place at the same time can be tricky, which is at least one of the reasons why Gorsuch’s formal investiture ceremony didn’t take place until today.

For security and crowd-control purposes, reporters are seated 45 minutes before the investiture is scheduled to begin. That leaves plenty of time for the press corps’ favorite pastime in the lead-up to a high-profile argument or ceremony: people watching. It’s a group effort, particularly when we are cautioned against standing up in our seats. There is a long list of prominent Republicans in the audience, including former attorneys general Edwin Meese (under President Ronald Reagan) and John Ashcroft, Alberto Gonzales and Michael Mukasey (under President George W. Bush).

Most of the Republicans on the Senate Judiciary Committee are in attendance, including Orrin Hatch of Utah, Lindsey Graham of South Carolina, John Cornyn and Ted Cruz of Texas, Jeff Flake of Arizona (who had given his dramatic eyewitness account yesterday of the baseball field shootings), Thom Tillis of North Carolina, and John Kennedy of Louisiana.

Non-Judiciary Committee members present include the Senate majority leader, Mitch McConnell of Kentucky, as well as Gorsuch’s two home-state senators, Cory Gardner and Michael Bennet of Colorado. Bennet, who is apparently the only Democratic senator here today, slips in close to the beginning of the ceremony, and briefly sits in the public gallery before deciding to join his Senate colleagues in the bar section.

The rules of the bar section are relaxed enough today to include some people who are not necessarily members in good standing of their state bar associations. Besides some senators and others who are not even lawyers, the guests in the section include the young nephew of Gorsuch’s who sat through virtually every minute of the nominee’s testimony back in March. (We hope he got extra school credit for that.)

There are plenty of lawyers in the bar section, though. White House Counsel Don McGahn makes his way around to greet the former attorneys general and others. Deputy White House Counsel Greg Katsas is here. Former U.S. solicitors general Gregory Garre (under George W. Bush) and Kenneth Starr (under President George H.W. Bush) are here, as is Noel Francisco, who has been nominated to be the next solicitor general, and Jeffrey Wall, currently the acting solicitor general.

But Neal Katyal, the former acting solicitor general under President Barack Obama who quite visibly supported Gorsuch’s nomination, is not here today.

White House press secretary Sean Spicer is in the back part of the press section along with the White House press pool. They have an obstructed view. And some of the pool photographers, barred from bringing their cameras into the courtroom, will respond by tweeting the stick-figure sketches they drew.

Leonard Leo, the executive vice president of the Federalist Society who played a pivotal role in the process that led to Gorsuch’s selection, sits in the back of the courtroom, surveying the events like a proud father.

The list of prominent Democrats spotted in attendance is considerably shorter, consisting of Bennet and lawyer David Frederick, Gorsuch’s former law partner. If the election had gone the other way, Frederick might well have been the solicitor general introducing President Hillary Rodham Clinton’s nominee.

Shortly before 2 p.m., retired Justice John Paul Stevens enters the courtroom, followed by Jeffrey Minear, the counselor to the chief justice. The 97-year-old Stevens is wearing one of his trademark bowties and moves easily to his seat.

Then one of the Supreme Court police officers addresses the audience. Most of his remarks are part of a standard speech given before oral argument sessions, but this one has a twist: He instructs the guests to turn off their cellphones and cameras, which are normally verboten in the courtroom (and still are for members of the press corps). But someone at the court must have made the prudent decision not to require the Washington VIPs to hunt through their pockets for quarters to pay for the lockers where cellphones are normally stored.

Supreme Court Clerk Scott Harris then escorts Gorsuch, his wife, Louise, and their two daughters, Emma and Belinda, to their seats in the front row of the gallery. Gorsuch greets several people along the way before taking his seat on the far left, facing the bench. Although he won’t sit in it for long, Gorsuch has a special chair, which was used by Chief Justice John Marshall during the early 19th century and has been used in investitures since 1972.

At 2:05 p.m., the most prominent Republican of all enters the room. Marshal Pamela Talkin announces his arrival: “The President of the United States and the First Lady!” President Donald Trump and Melania Trump sit down next to Stevens, and the president smiles.

In response to questions, we are told by the court’s Public Information Office that the Trumps signed the Supreme Court guest book and visited with the justices and the Gorsuch family before the ceremony began. We don’t have any way of knowing what the president and the justices discussed, but we can guess what topic the justices were trying hard to avoid: the president’s pending request to allow the federal government to reinstate the ban on travelers from six Muslim-majority countries.

Talkin’s next announcement is the more traditional “cry” to which we are accustomed. Eight justices take the bench, looking more relaxed and cheerful than usual. Chief Justice John Roberts welcomes the Trumps and then Stevens, telling Stevens “welcome back.”

The next speaker is a newly familiar face: Deputy Attorney General Rod Rosenstein, who testified last week before the Senate Intelligence Committee as part of the investigation into Russian interference in the 2016 elections. Rosenstein, who is wearing a morning coat, is here pinch-hitting for Attorney General Jeff Sessions, who is apparently in Malta. Rosenstein’s work today – presenting Gorsuch’s commission from Trump – is a little easier, and takes a lot less time, than his testimony last week.

Harris takes the commission from Rosenstein and reads it aloud. The language is the same wording that has been used in earlier commissions, but the commission’s reference to “emoluments” draws snickers from the press corps, which is thinking about the lawsuits that argue that a provision in the Constitution, known as the emoluments clause, bars the president’s businesses from accepting payments from foreign governments.

Danny Bickell, the deputy clerk of the court, escorts Gorsuch to the bench, where he shakes hands with each of his eight colleagues. Roberts then administers the judicial oath to Gorsuch, with Harris holding the Bible. Although this oath is largely a formality, Roberts wants to get it right, so he reads from a card. When Gorsuch repeats the last few words of the oath, he does so with emphasis: “So help me God.” The guests applaud, at some length. 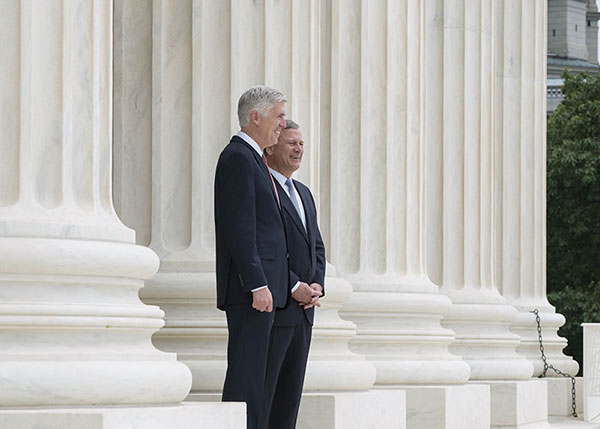 Photo by Fred Schilling, Collection of the Supreme Court of the United States

At approximately 2:11 p.m., six minutes after it started, the ceremony is over. Members of the press corps scurry downstairs to grab their phones and cameras to capture the traditional scene on the court’s marble plaza, as Roberts and Gorsuch come down the front steps and pose for pictures, but do not take questions. A reception will apparently follow near the courtroom, because as we head downstairs we hear champagne corks popping. Today, a party, but we will be back to business as usual on Monday morning.

Posted in What's Happening Now, Nomination of Neil Gorsuch to the Supreme Court