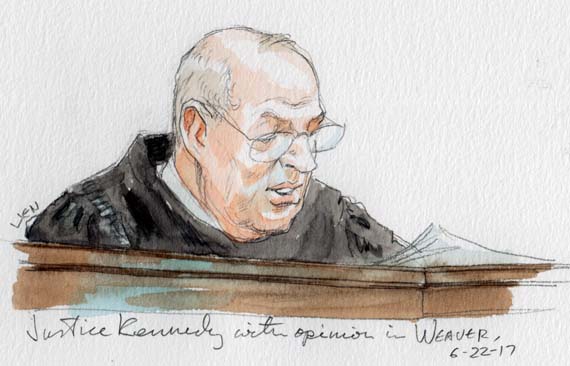 In a narrow and analytically useful opinion this morning, the Supreme Court ruled 7-2 that a courtroom closure error that is not raised until collateral attack via an ineffective-assistance claim does not require automatic reversal despite being labelled “structural” error. Instead, the defendant must show “prejudice” under a reading of Strickland v. Washington that five justices assume is correct. Justice Clarence Thomas filed a short concurring opinion, Justice Samuel Alito wrote an opinion concurring only in the judgment, and Justice Stephen Breyer filed a dissent joined by Justice Elena Kagan. Finally, Justice Neil Gorsuch joined Justice Anthony Kennedy’s majority opinion, Thomas’ concurring opinion, and Alito’s opinion that concurred only in the judgment. Perhaps unsurprisingly for a new justice, Gorsuch seems to want to be friends with as many of his colleagues as possible.

Weaver’s courtroom was “closed” during jury selection, an error to which he did not object

As previewed, the courtroom where Weaver’s Massachusetts murder trial took place was too small to accommodate the more than 60 people who were called as potential jurors. So while the jury was being selected over two days, some potential jurors had to wait in the hallway. When Weaver’s mother and other supporters tried to enter (Weaver was 16 years old at the time), a court officer excluded them and anyone else who was not a potential juror. Weaver’s mother told Weaver’s lawyer about this problem, but the lawyer did not object. (The court notes that this all occurred before the U.S. Supreme Court ruled in Presley v. Georgia that the Sixth Amendment’s public trial right extends to jury selection, and that it was not uncommon at that time for Massachusetts to close courtrooms during jury selections in murder trials.) Once the jury was selected, Weaver’s further court proceedings were fully open.

Not only did Weaver not object at trial, but he did not challenge the courtroom closure in his direct appeal. However, in a collateral motion for a new trial filed five years after the conviction, Weaver claimed ineffective assistance based on his lawyer’s failure to object to the courtroom closing. The Massachusetts courts denied relief, ruling that although the closure was “structural error” and the lawyer’s failure to object constituted ineffective assistance of counsel, Weaver had not offered any evidence to show that he had been prejudiced by the temporarily closed courtroom. Whether a “structural error” requires a showing of prejudice when raised via an ineffective assistance claim is a question that had divided lower courts, so the Supreme Court agreed to review Weaver’s case.

As previously noted, oral argument in this case showed that Alito and Kagan were, as they often are in criminal cases, at opposite ends of the spectrum. It thus fell to Kennedy to find a majority path out of the thicket that prior “structural error” cases have created. As Breyer’s dissent today observed, it would seem impossible for a defendant to prove prejudice from a structural error when a reason for describing some errors as structural has been, as the majority opinion says, that their effects are “simply too hard to measure.” But Kennedy’s opinion offered grounds sufficient to attract a majority, while limiting the ruling “specifically and only” to the narrow context of this case. Overall, the opinion provides a usefully nuanced analysis of prior structural-error cases.

First, the court explained, there are errors that operate not to protect against “erroneous conviction” of a criminal defendant, but in favor of “some other interest.” For these errors, “harm is irrelevant” — violation of the right may even aid a criminal defendant, such as appointing a lawyer in violation of the Sixth Amendment right of self-representation. Second, there are structural errors that can result in “automatic reversal” because “the effects of the error are simply too hard to measure.” Finally, some constitutional errors, such as denying an attorney or refusing to give a reasonable-doubt instruction, are adjudged to “always result[] in fundamental unfairness” and thus lead to reversal without any showing of harm.

Importantly, the court noted that “[t[]hese categories are not rigid,” and that “more than one of these rationales” may apply to a particular error. Most significantly, “[a]n error can count as structural even if [it] does not lead to fundamental unfairness in every case.

The “theme” of the court’s current term? Four narrowing assumptions

With regard to this particular case, the court explained that a violation of the public-trial right, while structural, does not always lead to fundamental unfairness. “[H]ow best to manage” the many possible variations in circumstances that may lead to closing a criminal courtroom presents difficult and fact-specific issues. The court has previously ruled that a courtroom might be closed for a preliminary segment of a trial and for reasons of some necessity, without necessitating reversal. Because a public-trial error is therefore not always fundamentally unfair, the court today placed the burden on the defendant, in a collateral proceeding when no objection was made at trial and the issue was not raised on direct appeal, to demonstrate that reversal is required.

The court’s opinion noted four assumed or undecided aspects of this case. Indeed, I think a general theme of October Term 2016 – and possibly the Roberts court overall without Justice Antonin Scalia – is that cases have been decided on narrow grounds whenever possible.

First, the court assumed that the closure in this case was a constitutional, structural, violation. Second, the fact that this assumed public-trial error was not objected to or preserved on direct appeal presents special considerations of “finality.” The court left open whether the analysis would be the same if the error had been objected to and preserved. Third, the court assumed that the lawyer’s failure to object here was an unreasonable professional error.

Fourth and finally, the court assumed without deciding that for a Strickland ineffective assistance claim, prejudice might be shown either by applying the normal test – “reasonable probability that the outcome would have been different” – or by demonstrating fundamental unfairness. The opinion noted that quotations can be found in the Strickland opinion to support either view, and the majority did not settle the difference today because it concluded that Weaver loses either way.

Applying Strickland to this public-trial violation

Kennedy’s opinion pointed out that the constitutional right to effective counsel does not mean a right to a “mistake-free” performance. Instead, even when a lawyers makes errors, a defendant must demonstrate why his lawyer’s errors made an important difference in his case. Moreover, when a courtroom closing is not objected to, the trial court has no opportunity to cure it.  So the court concluded that for this particular structural error, raised in this particular procedural context, the burden to justify reversal of his conviction properly rests on Weaver.

Weaver, however, made no effort below to demonstrate that the result of his trial would have been different had the courtroom been open to his supporters during jury selection, so the traditional test for prejudice under Strickland was not met. In addition, the court concluded that based on the particular facts of Weaver’s jury selection, no “fundamental unfairness” had been shown. Thus the Massachusetts courts were correct in denying relief to Weaver.

Alito concurred only in the judgement, stating that Strickland supports only one test for prejudice – whether there is a reasonable probability that the outcome would have been different — and that “fundamental unfairness” cannot be argued separately if the traditional Strickland test is not met. This is a narrower reading of Strickland, and the majority expressly left it open. Thomas’ short concurrence noted two of the majority’s “assumptions” and expressed some doubt about them, stating that he “do[es] not read the opinion … to preclude” Alito’s approach. Finally, as noted above, Gorsuch silently joined all three opinions that made up the seven-justice majority. How exactly one can join both Kennedy’s and Alito’s opinions seems a bit mysterious, if collegial.

Breyer, joined by Kagan, filed a four-page dissent, not focused on the facts of Weaver’s case, but rather objecting to the doctrinal division of structural errors into categories. Echoing Kagan’s questions at oral argument, Breyer criticized the logic of saying that structural errors are those whose effect is “too hard to measure,” and yet demanding that a defendant demonstrate the effect of a particular structural error on the fairness of his trial. Breyer would not “give lower courts the unenviably complex job of deciphering which structural errors really undermine fundamental fairness and which do not,” saying that “the game is just not worth the candle.” But he did not further explain why.

Kennedy’s majority opinion ended with a broad statement of the “unending duty of the judiciary to … find the proper balance” between “fair and just trials … and finality.” By contrast, the four assumptions in his opinion support what I think is a careful analysis of doctrine, narrowly applied to the public-trial right in the context of this case. The court’s opinion will prove useful in the future for analyzing diverse claims of structural error. Happily, it avoids sweeping broadly over questions that might be better worked out by lower courts over time. In addition, the opinion is not dismissive of either the state’s claims or Weaver’s constitutional objections. Instead the majority gives them fair consideration in a detailed way. Some observers will always object to Kennedy’s style and his balancing approach. But in the often overwrought adversarialism of constitutional criminal procedure, the Weaver opinion is refreshingly free of vitriol and bombast.