Argument analysis: Discretion all the way down?

Tuesday’s argument in McLane v. Equal Employment Opportunity Commission gave the justices an opportunity to consider in detail the role of federal district courts in policing EEOC subpoenas. Justice Stephen Breyer did so in the most clear terms: “I mean, that’s what judges are there for in the district courts,” he stated, implying that district courts should be given leeway in order to rein in agency fishing expeditions.

But much of the argument concerned whether the EEOC subpoena under review was a fishing expedition at all. In relevant part, that subpoena sought “pedigree information” – names and contact information for employees whom McLane required to take a strength test as a condition of employment – in connection with a charge that McLane’s use of the test constituted sex discrimination. The district court had held that the pedigree information was not yet relevant to the charge under investigation, but the U.S. Court of Appeals for the 9th Circuit applied de novo review to conclude that the district court construed “relevance” too narrowly, and that McLane should have been required to produce the information. 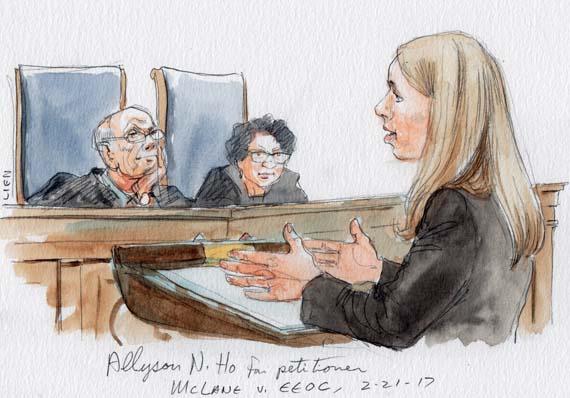 Representing McLane, Allyson Ho argued that the district court was in the best position to assess whether the pedigree information was relevant to the underlying EEOC charge and investigation. However, Justices Ruth Bader Ginsburg and Sonia Sotomayor repeatedly expressed skepticism, pressing Ho on a point first made by Judge Paul Watford in the panel opinion: Couldn’t one say as a matter of law that pedigree information would be relevant to a sex-discrimination charge, because it would allow EEOC investigators to discern whether McLane had treated male and female test-takers differently? Embellishing this point, Rachel Kovner, arguing for the federal government, pointed out that McLane had resisted other aspects of the EEOC subpoena on undue-burden grounds; consequently, the pedigree information might allow the EEOC to fill in some remaining gaps, including whether and why other test takers were fired, through its own legwork. Conversely, Breyer raised a theme to which he returned often during the course of argument, positing that the relevance standard was so broad that, absent district court oversight, the EEOC could embark on massive information-gathering missions at tremendous cost to the affected companies.

Ho also argued that even if the court did misconstrue the relevance inquiry as a matter of law, the 9th Circuit should have remanded for the district court to exercise its discretion in light of the proper standard. Kovner disagreed on that point, although she supported Ho’s position that the court of appeals should have reviewed the district court’s decision for abuse of discretion. Kovner suggested that an abuse-of-discretion standard might discourage appeals, and therefore bring subpoena enforcement proceedings to a quicker conclusion, while also allowing district courts to make case-specific findings. Nonetheless, she agreed that the district court applied the relevance standard incorrectly as a matter of law, and added that, in addition to the use suggested by Judge Watford and Justice Ginsburg, the pedigree information might come in handy in a disparate-impact case by helping the EEOC to discern whether the strength test was justified by business necessity. Finally, in response to questions from Chief Justice John Roberts and Justice Elena Kagan, Kovner was able to articulate her argument for why the court should affirm the 9th Circuit: The district court had applied the relevance test as though it were a “necessity” test, and that legal error was by definition an abuse of discretion.

In different ways, Justices Kagan and Anthony Kennedy both questioned whether Kinnaird’s argument, with its focus on which legal actors were vested with discretion that they might then abuse, might be too narrow. Kennedy “suppose[d] at the end of the day, relevance is a legal matter” that might be reviewed de novo, but went on to suggest that district courts’ traditional discretion to administer trials might nonetheless come into play. And Kagan asked whether Kinnaird was taking the phrase “abuse of discretion” “a bit too literally,” because the standard applied in some contexts where the decision-maker under review did not actually have authority to exercise discretion, but rather was simply “the right institution … to make a particular kind of judgment.” In response to both questions, Kinnaird returned to the legal nature of the relevance determination, emphasizing at one point that the district court had not actually engaged in fact-finding before ruling on the EEOC’s motion, but had instead considered only attorney argument. Finally, Kinnaird made his pitch for the practicality of his preferred outcome, arguing that de novo review would promote consistency between district courts, and proffering that – contrary to Breyer’s concern that directing de novo review could open the floodgates to appeals from orders enforcing or quashing EEOC subpoenas – there had been only six cases to reach the 9th Circuit over the past 25 years.

Throughout the argument, Ginsburg and Sotomayor were the most skeptical of McLane’s position, though it was not clear whether they were inclined to support a de novo standard of review in all EEOC subpoena cases, or whether they leaned toward holding that the district court abused its discretion by definition by making an error of law. Breyer seemed the most inclined to embrace district court discretion as a bulwark against overzealous agency investigations, with some support from Kagan and Roberts, who both seemed focused on institutional competence. Finally, Justices Kennedy, Samuel Alito and Clarence Thomas did little to tip their hands. Ultimately, however, this case does not seem likely to inspire multiple opinions, and the path of least resistance seems to be the one taken by the government: that the 9th Circuit’s outlier standard of review is incorrect, but the district court erred as a matter of law in making its relevance determination.