This morning the Supreme Court heard only one oral argument, in Venezuela v. Helmerich & Payne International. At issue in the case is whether the U.S. Court of Appeals for the D.C. Circuit was right to apply what it described as an “exceptionally low” bar to determine whether U.S. courts have jurisdiction over a lawsuit against a foreign government – looking only at whether the plaintiff’s claim against the foreign government is “insubstantial” or “frivolous” – or whether a tougher, more substantive standard applies to such cases. By the end of the hour, it was difficult to predict precisely how the justices would rule, but one thing was clear: The justices and spectators had enjoyed an exceptionally high level of advocacy from the three lawyers who appeared in the case.

Under the Foreign Sovereign Immunities Act, foreign governments normally cannot be sued in U.S. courts. But the two companies relied on the act’s “expropriation” exception, which allows lawsuits against foreign governments to go forward in U.S. courts when “rights in property taken in violation of international law are in issue” and there is a commercial connection to the United States.

Venezuela asked the district court to dismiss the case, arguing that the expropriation exception did not apply. The district court agreed in part with Venezuela, but the court of appeals allowed both companies’ expropriation claims to go forward. The appeals court reasoned that the companies’ claims could survive a motion to dismiss for lack of jurisdiction because they were neither “wholly insubstantial” nor “frivolous” – the general standard for finding jurisdiction.

At today’s oral argument, the lawyers and justices grappled with two interrelated questions. On the one hand, several justices seemed concerned about the effect that a ruling for the companies would have on foreign relations. In particular, they worried that applying an “exceptionally low” bar would create the dual prospect that more lawsuits against foreign governments would be allowed to go forward in U.S. courts and that more lawsuits against the United States in foreign courts would be permitted to proceed in retaliation for the U.S. rule. But on the other hand, some justices suggested, finding that a more stringent jurisdictional bar applies to FSIA cases would basically require the trial court to decide the entire case as part of its ruling on jurisdiction, leaving nothing to be decided on the merits.

Arguing on behalf of Venezuela today, attorney Catherine Stetson took a hard line. She reiterated that the “exceptionally low” standard has no place in FSIA cases, which she described as “sui generis.” In FSIA cases, she asserted, the trial court must determine whether it has jurisdiction to decide the case at the very beginning, before it exercises any other power over the foreign country. Making that determination, she emphasized, requires a more searching inquiry than whether the claims are simply “frivolous.” Rather, the trial court must apply the detailed, substantive standards outlined in the FSIA and conclude that “rights in property taken in violation of international law are in issue.” 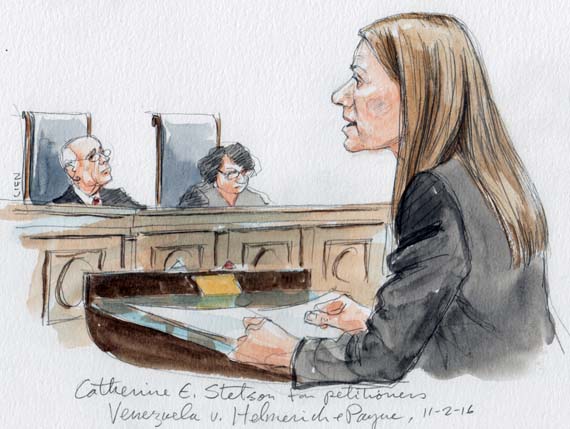 Justice Elena Kagan questioned this interpretation. If the court decides at the threshold that a “right in property” has been taken, in violation of international law, she asked, what is left to be “in issue,” as the statute also requires? Stetson did not seem to regard this as a problem, reminding Kagan that the Supreme Court has already indicated that questions relating to jurisdiction and the merits of a case can be intertwined. But Kagan appeared unconvinced, responding that the statute “seems a funny way of writing this if you are right.”

Arguing for the two companies, attorney Catherine Carroll urged the justices to rule that courts should approach cases against foreign governments the same way that they would approach any other jurisdictional question. But that brought a rebuke from Justice Anthony Kennedy, who pointed to the need for “extreme sensitivity” to foreign relations concerns. Later, Kennedy observed that foreign countries would not want to be labeled as violators of international law, as they might be if a case were allowed to go forward. 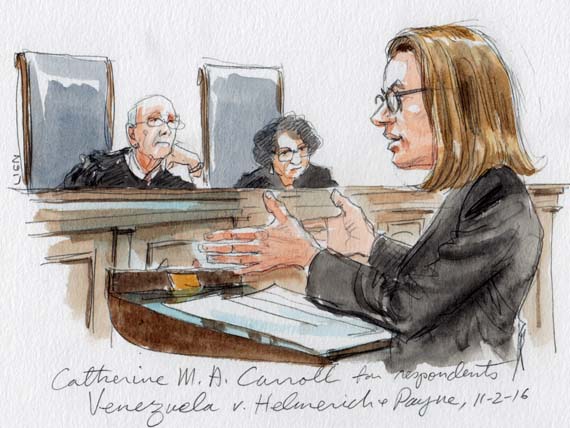 In the case of the expropriation exception, Carroll argued, it would make no sense for a court to have to decide whether the seizure of property was a taking in violation of international law in order to decide whether it has jurisdiction over the case. Justice Ruth Bader Ginsburg had advanced this idea earlier in the argument, telling Stetson that the “low” standard that Venezuela criticizes is the general rule. It would be “very strange,” Ginsburg suggested, to say that a plaintiff has to prevail on the merits in order for the court to have jurisdiction.

Chief Justice John Roberts was less persuaded by Carroll’s argument. What, he asked Carroll, would be wrong with a scenario in which the court decided jurisdiction and the merits at the same time? But Carroll pushed back with what seemed to be a persuasive example for some justices: Under Venezuela’s rule, she posited, a court could never find that it had jurisdiction to issue a merits decision in the defendant’s favor, because it would have effectively already decided the merits question in the plaintiff’s favor at the jurisdictional stage.

For Justice Stephen Breyer, the dispute boils down to a practical question: At what point in the process should judges decide whether an FSIA case can go forward? Breyer’s solution seemed to be to give district judges some discretion to make the jurisdictional call, but with a presumption that a judge should make that call as soon as possible in an ordinary case. “Why are we in this?” he asked Stetson.

Elaine Goldenberg, the assistant to the U.S. solicitor general who argued on behalf of the federal government, rebuffed Breyer’s suggestion that the timing of the determination should be left to the district judge. “This is a special context,” she countered.

Here too Roberts was skeptical. How often would the timing of the district court’s ruling actually matter, he wondered. Goldenberg insisted that the timing of the ruling does make a difference, and that allowing lawsuits to go forward without first determining that the substantive standards of the FSIA have been met would be a “real affront” to the foreign country being sued in a U.S. court. She cited an expropriation case against Russia that had been allowed to proceed in a U.S. court, resulting in a fine against Russia of $50,000 per day. That prompted Russia, she explained, to initiate an expropriation case against the United States in a Russian court, imposing the same fines against the United States.

Kennedy seemed to be the justice most squarely in Venezuela’s corner. But Venezuela would need at least four of the remaining seven justices to join Kennedy to reverse the D.C. Circuit’s ruling in the companies’ favor. And it’s not at all clear that Venezuela can get those votes. Although the justices are no doubt sensitive to the foreign relations implications of their ruling, those concerns may not be enough to overcome their other qualms about how a ruling in Venezuela’s favor would operate. Will the justices in the end go with one of the bright-line rules proposed by the parties, or instead with Breyer’s more “practical” rule giving discretion to the trial judge? We likely will know the answer next year.