Today we had our annual running of the trolls — wherein we respond to people who direct mostly hateful and sometimes cute things to our @SCOTUSblog account, thinking it is the official Twitter account of the Supreme Court.  We’ve done this for several Terms without incident.  But this Term, Twitter — probably through some automated system — decided that our account had been hacked.  So it kicked us out of our account — thinking we were the hackers — and then blocked all the tweets, so they have disappeared.  We’re trying to get our account back — so far without success.  But for posterity, and for those who thought we had deleted the tweets ourselves, here are some screen shots captured from our Twitter followers (many others are blocked by Twitter so even retweets don’t show them): 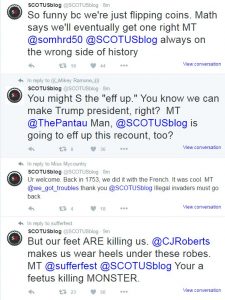 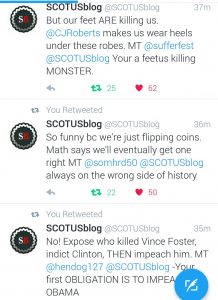 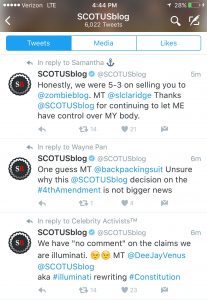