One of these tricky issues was on full display in Simmons v. Himmelreich. But despite the potentially complicated questions in the case, a unanimous Supreme Court held today that one of the rules for prisoner-rights suits simply means exactly what it says: A prisoner can bring a constitutional tort claim against individual prison officials even after a court dismissed his earlier Federal Tort Claims Act suit because the officials acted in a “discretionary” capacity. 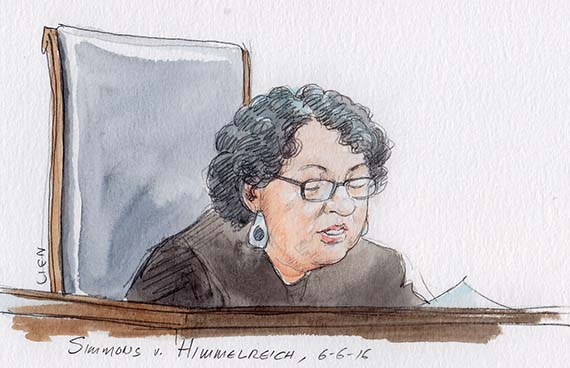 The ruling, penned by Justice Sonia Sotomayor, is a decisive win for prisoner-rights advocates. It means that Walter Himmelreich and other, similarly situated civil rights litigants retain a critical tool – the constitutional tort claim against individual officers – in enforcing civil rights and deterring their abuses. More generally, it means that there is now one less tricky issue in prisoner-rights litigation, and it is just a little bit easier, at least in the narrow circumstances of this case, to retain a claim and enforce federal civil rights.

Himmelreich sued the government under the Federal Tort Claims Act, which waives sovereign immunity for tort claims against the federal government for the acts of its employees. It also gives federal district courts exclusive jurisdiction over those claims, subject to certain procedural requirements in Chapter 171 (which becomes relevant below, in Himmelreich’s second suit). But the FTCA also contains a list of exceptions, in particular, a “discretionary function” exception that exempts “[a]ny claim based upon . . . the exercise or performance . . . [of] a discretionary function” from the FTCA. This means that someone (like Himmelreich) who has been injured has no FTCA claim against the government for injuries that result from a discretionary act of a government employee. The district court thus dismissed Himmelreich’s FTCA claim under this exception, ruling that the prison officials’ decision as to where to house inmates was a discretionary function. The parties did not challenge this ruling.

While Himmelreich’s FTCA case was still pending, he filed a second suit against the individual prison officials for violating his Eighth Amendment rights. After the district court dismissed Himmelreich’s first suit, the officials then moved to dismiss this second suit under yet a different part of the FTCA. In particular, the officials argued that the FTCA’s “judgment bar” foreclosed this second case. The judgment bar, in Section 2676, says that once a plaintiff receives a judgment in an FTCA suit, he generally cannot bring another suit against an individual employee based on the same incident. It reads:

The judgment in any action [under the FTCA] shall constitute a complete bar to any action by the claimant, by reason of the same subject matter, against the employee of the government whose act or omission gave rise to the claim.

In other words, the government argued that the district court’s dismissal of Himmelreich’s FTCA case amounted to a “judgment,” and that the FTCA judgment bar therefore foreclosed Himmelreich’s second case against the individual officers.

This is where things get a little complicated. Himmelreich countered that the judgment bar did not apply to cases dismissed under the FTCA exceptions provision (the same one that the district court used to dismiss Himmelreich’s first case). That’s because the exceptions provision says that “[t]he provisions of this chapter” shall not apply to claims dismissed under the exceptions (including the discretionary function exception). “The provisions of this chapter,” in turn, refer to Chapter 171, the list of procedural requirements (mentioned above). And Chapter 171, in turn, includes the judgment bar. The upshot is that a case dismissed on the judgment bar (like Himmelreich’s first case) does not foreclose a case against individual officers arising out of the same incident (like Himmelreich’s second case).

The Supreme Court agreed. In a statutory analysis that required all of two paragraphs, the Court said that Himmelreich’s plain reading of the FTCA was correct, and that the FTCA created no bar to his second case against the individual officers. The Court noted that result made sense:

If the District Court in this case had issued a judgment dismissing Himmelreich’s first suit because the prison employees were not negligent, because Himmelreich was not harmed, or because Himmelreich simply failed to prove his claim, it would make little sense to give Himmelreich a second bite at the money-damages apple . . . .

Where an FTCA claim is dismissed because it falls within one of the “Exceptions,” by contrast, the judgment bar provision makes much less sense. The dismissal of a claim in the “Exceptions” section signals merely that the United States cannot be held liable for a particular claim; it has no logical bearing on whether an employee can be held liable instead.

The Court also roundly rejected the government’s non-textual arguments. It said that United States v. Smith, in which the Court held that another provision of Chapter 171 (the exclusive remedies provision) foreclosed a suit against an individual employee, did not control. That’s because Smith didn’t even discuss the “shall not apply” language in the exceptions provision. Moreover, the exclusive-remedies provision in Smith (unlike the judgment bar) was specifically designed to apply to the exceptions in the FTCA. The Court also said that it didn’t need to address the government’s parade of horribles that would result if every provision of Chapter 171 “shall not apply” to the FTCA’s exceptions. “If the Government is right about the other provisions of Chapter 171, the Court may hold so in the appropriate case.”

At the end of the day, the ruling means that Himmelreich can pursue his civil rights claim against the individual officers, even after the district court dismissed his earlier FTCA claim based on the “discretionary function” exception. More generally, it probably also means that a plaintiff can similarly pursue a civil rights claim against individual officials, even after a district court dismissed an FTCA claim based on other procedural grounds that have nothing to do with “whether an employee can be held liable instead.”