Useful or creative: A look at design protection 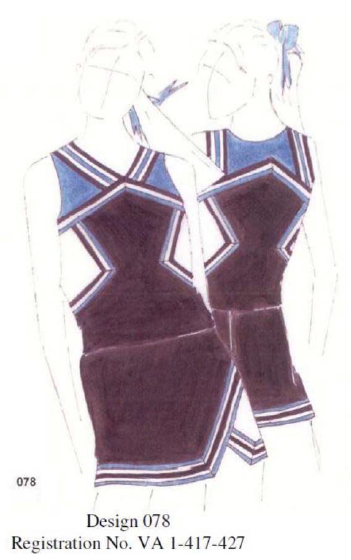 The Supreme Court, taking up an issue that has puzzled lower courts, agreed on Monday to clarify whether the design that is a part of a “useful article” is original enough to gain its own copyright protection.  In the case raising that issue (Star Athletica v. Varsity Brands), the fight is over designs that are part of uniforms or warm-up outfits for cheerleaders, but the potential impact could sweep far more widely, especially in the garment industry.

In a second intellectual property case that the Court accepted for review, the issue is whether the holder of a patent who waits too long to defend its rights loses the option of challenging an alleged infringement.  That question came up in the case of SCA Hygiene Products v. First Quality Baby Products, involving a dispute over patents for disposable “adult diapers.”  Both that case and the cheerleader-uniform controversy will be heard and decided next Term.

The Court also turned aside a challenge to the way that Seattle’s fifteen-dollar minimum-wage guarantee applies to local companies that are affiliated with out-of-state franchise networks.  There was, as usual, no explanation for the denial of the case (International Franchise Association v. Seattle).

The Star Athletica case involves a provision of federal copyright law that makes a “useful article” — clothing, for example — ineligible for copyright protection.  But if part of it represents a creative design, that might gain such protection.  The company that took the issue to the Justices said that lower courts have come up with at least ten different ways to separate what can be copyrighted from the rest of the article.

The petition argued that the case “involves the most vexing, unresolved question in copyright law: how to determine whether a feature of a useful article — such as a garment or piece of furniture — is conceptually separable from the article and thus protectable.”  It noted that one appeals court had described this challenge as a “metaphysical quandary.”

Varsity Brands has for years dominated the market for cheerleader uniforms and warm-up clothing as sports wear.  Earlier, Varsity had failed to get its designs approved for copyright by the federal office that holds that authority, but later the company prevailed.  Almost as soon as a new firm, Star Athletica, entered the sports uniform business, Varsity sued for infringement of the copyrights it had won.

A federal trial judge rejected Varsity’s claim, finding that the copyright was for such design features as chevrons, stripes, and patterns, but those could not be separated from a cheerleader uniform, because such an item of sportswear was indistinguishable from its design elements.

The U.S. Court of Appeals for the Sixth Circuit, however, found that Varsity’s designs were entitled to copyright.  The court of appeals devised an unusual analytical device — for intellectual property law — of deferring to the fact that the company had a copyright from the government office.  In addition, the Sixth Circuit rejected nine other tests, fashioned by other courts of appeals, on how to separate designs from the useful article of which they were a part.

The Court’s agreement to rule on the SCA Hygiene Products case makes that something of a sequel in the patent field to a 2014 ruling by the Justices on copyright law — the six-to-three ruling in Petrella v. Metro-Goldwyn-Mayer.  In that decision, the Court ruled that the doctrine of laches (informally, sitting on one’s hands rather than acting) could not be used to shorten the three-year time limit that exists for filing a copyright-infringement lawsuit.

In the new patent case, the en banc U.S. Court of Appeals for the Federal Circuit, acting in the wake of the Supreme Court’s Petrella ruling, chose by a six-to-five vote to continue to apply the doctrine of laches to patent-infringement claims.  In patent law, if the holder of such rights does not sue an alleged infringer within six years after the claim arose, the holder loses the right to sue.  But the Federal Circuit concluded that the time could be shortened if the alleged infringer invokes the defense of laches.

SCA Hygiene Products is a Swedish company that makes and sells underwear products for patients who suffer from incontinence.  In the United States, its products are sold under the brand name “TENA.”  The company has a U.S. patent on its design.

A rival firm, First Quality Baby Products, makes a disposable version of such products, and sells them under private labels.  The two companies talked with each other about a possible violation of the SCA patent, which led the Swedish firm to seek the advice of the U.S. Patent and Trademark Office.

The PTO took almost three years to respond, resulting in a decision in favor of SCA’s patent.  SCA in August 2010 sued First Quality for infringing on its patent, but that was nearly seven months after SCA had first approached First Quality about an alleged infringement.  First Quality then sought to have the case dismissed, relying upon the defense of laches.

A federal trial judge ruled in favor of First Quality.  SCA then appealed to the Federal Circuit, which upheld First Quality’s laches claim.  Relying on the Supreme Court’s reasoning on that defense in the Petrella copyright case, SCA sought en banc rehearing.  That resulted in the split decision adhering to the Federal Circuit’s prior view that an unreasonable delay in suing for patent infringement results in the loss of the right to sue.

Among the new petitions that the Justices chose not to review on Monday was one that could have drawn the Court into the midst of an issue that has become a major question in the presidential election campaign: the dispute over raising the minimum wage as a means of reducing the gap in wages among workers who have lower-skilled jobs.

The city of Seattle has been a leader in the move to raise the minimum-wage level, choosing to go to a fifteen-dollar-an-hour minimum, to be raised in stages until it reached that amount at the start of the calendar year 2021.  The city ordinance, adopted in June 2014, sets up two different schedules for the increases.

The ordinance, however, treats Seattle operators of franchises, even if they individually have fewer than five hundred workers, as covered by the first schedule because they are a part of a franchise network that overall employs more than five hundred people.

That part of the ordinance was challenged by the trade group for franchise operators, the International Franchise Association, with the argument that it discriminates against interstate commerce because it discriminates against local companies solely if they are aligned with an out-of-state network.  That claim was rejected by the U.S. Court of Appeals for the Ninth Circuit.  There was no indication of any dissent among the Justices to the denial of the case, International Franchise Association v. Seattle.

In another order on Monday denying review, in the California death-row case of Boyer v. Davis, Justice Stephen G. Breyer filed another in his continuing series of dissents from the Court’s failure to rule on whether a prolonged stay on death row for a person convicted of murder violates the Eighth Amendment’s ban on cruel and unusual punishment.  In this particular case, Richard Delmer Boyer, was originally sentenced to death some thirty-two years ago.