Argument preview: May a federal judge “recall” a jury soon after discharge? 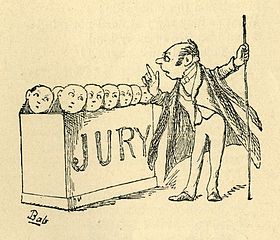 Next Tuesday in the penultimate argument of the Term, the Court will consider an interesting, if not earth-shattering, question of federal judicial authority, in a small car-crash case tried by a federal magistrate judge in Montana. Just as interesting, perhaps, is the adversarial battle between two prominent D.C. lawyers who are both former Supreme Court law clerks and alumni of the U.S. Solicitor General’s office. Dietz v. Bouldin should provide a refreshing respite for the Justices, between the somewhat arcane first argument that day about prior convictions, and the next morning’s final argument of the Term challenging the conviction of former Virginia governor Robert F. McDonnell.

Running a red light all the way to the Supreme Court

One fateful day in August 2009, Hillary Bouldin ran a red light in Bozeman, Montana, and crashed into Rocky Dietz’s car. Dietz sued Bouldin, and the case was removed to federal court on diversity grounds. (Ironically, this diversity removal may have been improper, but that point has been waived and is not at issue here.) At a two-day trial before a magistrate judge in Butte, Bouldin admitted liability and some damages, but he argued that damages of $10,136.75 were enough. Dietz wanted more, while Bouldin argued that Dietz’s further medical expenses arose from causes other than the car crash. The $10,136.75 damages were stipulated to, and the question for the jury was how much more money (if any) Dietz should be awarded.

But it turned out that the jurors did not clearly understand their mission. During deliberations they sent out a question: “Has the $10,136 medical expenses been paid; and if so, by whom?” After discussion with both sides’ lawyers, the judge thought that it was “crystal clear that they have to award [at least] that amount,” so the jury was told (without objection) simply that “this information … is not germane to the jury’s verdict.” The jury soon returned a verdict, awarding Dietz “$0 (zero).” The lawyers declined to have the jury polled, and the judge thanked the jurors for their service and said “You’re free to go. The jury’s discharged.” The jurors then left the courtroom.

After the jurors had left, Dietz’s lawyer indicated that he wanted to make a post-trial motion. The judge said Dietz would have “plenty of time” later, and he retired to chambers. But very shortly thereafter, upon “a fairly quick second thought,” the judge called the attorneys into his chambers and explained that he had “stopped the jury from leaving the building” because he had realized that a verdict of zero dollars was “not legally possible” in light of the stipulated $10,136 damages. He suggested that either the jury could be sent back “for continuing deliberations,” or there would have to be “extensive post-trial motions” and a new trial. When Dietz objected to recalling the jury, the judge remarked that he thought Dietz “want[ed] another chance,” a “second bite at the apple.” The judge then said he would recall the jury because “I hate to just throw away the money and time that’s been expended in this trial.”

The judge then reassembled the seven-member jury and explained to them the error. (One juror amusingly responded, “had you said that upon sending us into the room, you would have had a different answer.”) The judge then spoke with the jurors and was assured that they had not spoken with anyone during the brief time they were “discharged”: all of the jurors had remained in the hallway, with the exception of one who had briefly gone either “downstairs” or out of the building (it’s unclear). The judge then sent the jury back to deliberate with a clear understanding that the damages had to start at $10,136. The jury returned a verdict for $15,000.

Although Dietz was the winner, he pursued an appeal, arguing that a jury cannot be recalled once it is discharged and has left the courtroom. (Perhaps the trial judge was right that Dietz wanted “another chance” with a new jury, rather than the one that had just awarded him zero dollars.)   The Ninth Circuit disagreed, ruling that a federal judge “may recall a jury shortly after it has been dismissed to correct an error . . . , but only after making” sure that the jury was “not exposed to any outside influences” in the interim.

A question of “inherent authority”

As Dietz – who is represented by Kannon Shanmugam, a former clerk to Justice Antonin Scalia and assistant to the Solicitor General with seventeen arguments at the Court under his belt — now argues, “[t]his case presents a simple but important question.” The federal courts of appeals have split on whether a jury may ever be recalled after discharge, and – somewhat surprisingly – the Federal Rules of Civil Procedure do not expressly address the point. Dietz argues that the federal rules implicitly disapprove such authority, and that there is no “long unquestioned history” supporting such a power. He further argues that a “bright line rule” will promote “fairness and finality,” and that difficult and unending line-drawing efforts will otherwise be required.

But was this question “improvidently granted”?

In today’s competitive Supreme Court advocacy market, Bouldin too obtained experienced counsel: Neal Katyal, a former clerk to Stephen Justice Breyer and a former Acting Solicitor General who has argued twenty-seven cases in the Supreme Court. His brief takes a somewhat dismissive, even harsh, tone, accusing Dietz’s brief of “bait and switch” tactics and “false[]” case descriptions. And he devotes seven pages, far more than normally seen on such a point, to arguing that Dietz’s claims have been “forfeited” because they were made “for the first time in his merits brief.” He claims that Dietz presented the question below, and even at the certiorari stage, as a constitutional one, involving the right to an impartial jury, not the “supervisory authority” question he now argues. Thus, Bouldin preliminarily argues, the case should be dismissed as improvidently granted.

On this point, Dietz’s reply brief takes a low-key, if firmly opposed, approach to Bouldin’s “belligerent” argument. He counters that, he has “preserved th[e inherent authority] claim at every stage,” and “it is remarkable respondent would suggest otherwise.” Given that the Court grants review to resolve circuit splits on the merits if possible, and that this case presents one for which almost any clear answer would be useful, we’ll see whether this non-merits skirmish interests the Justices at all. (And it’s a shame that only one of the advocates’ former bosses will be present.) But there apparently will be no love lost between the parties’ advocates in the Courtroom on Tuesday

There will also be a third lawyer arguing on Tuesday; the federal government has entered the case as an amicus because there are “similar questions in [federal] criminal” cases. Arguing for the federal government, Assistant to the Solicitor General John Bash, also a former Scalia clerk, appears to take no position on the question of whether the case should be dismissed as improvidently granted. On the merits, he argues in support of Bouldin that a “categorical rule” against jury recall is unwise and inefficient, so long as the recall of a jury “will not prejudice any party.” Both the government and Bouldin argue effectively that federal trial judges should have discretion in this area, as implied by Rule 83 (which provides that judges may “regulate their practice in any manner not inconsistent with these rules”) and Rule 1 (which provides that federal rules “should be . . . administered . . . to secure the just, speedy, and inexpensive determination of every action”).

Both parties also supply a persuasive historical account to support their position, although Dietz responds that history shows no settled practice of recalling juries and if anything shows the opposite. Dietz argues against a “dramatic loosening of the standards for inherent authority,” while Bouldin and the federal government argue that Dietz’s bright-line rule would produce costly inefficiencies. (And finally, to fully protect her position, Bouldin argues that even if the Court were to rule for Dietz, any error was harmless in this case.)

I think this argument will be a fun one to watch, read, or hear. There are no weighty consequences hinging on the result, and a ruling for either side could be changed by the Rules Committee if so desired. Good arguments are available for both sides and amusing hypotheticals (watch out for Justice Breyer!) are limitless. Meanwhile, bright-line rules are always easier to administer – but lawyers and judges often find a “work around” for them, and a bright line is always over- or under-inclusive in some respect. Finally, the advocates are talented and experienced, and are clearly bristling for redemption. Although April is a very busy time of year at the Court behind the scenes, I hope the Justices will find the energy to be engaged as well as entertained. If not, we may have to recall them in May when the opinion comes out!