The Supreme Court is often described as a “hot bench” – a place where the questions fly fast and furious.  But when the Court heard oral arguments today in the case of Michael Bryant, it was more like a lukewarm bench:  three of the eight Justices – Clarence Thomas, Samuel Alito, and Elena Kagan – did not ask any questions at all, and the five Justices who did ask questions had far fewer than we would normally expect.  What was scheduled as a sixty-minute argument took only forty-four, with lawyers for both sides sitting down before their time was up.  Although the relative dearth of questions in the case makes it harder to make predictions about the outcome of the case with any confidence, it seems likely that the Court will reject Bryant’s challenge, and the government will prevail.

At issue in the case was whether the Constitution allows the federal government to use Bryant’s numerous domestic-violence convictions to prosecute him under Section 117(a) of Title 18 of the U.S. Code, which makes it a federal crime to “commit a domestic assault within . . . Indian country” if you already have “a final conviction on at least 2 separate prior occasions in Federal, State, or Indian tribal court proceedings for” domestic-violence offenses.  If Bryant had been tried in a state or federal court and sentenced to prison time, he would have had a right under the Sixth Amendment to have a lawyer appointed to represent him; if he didn’t get a lawyer, those convictions could not be used to subject him to charges under Section 117(a).  But the domestic-violence convictions on which the government is trying to rely in Bryant’s case came in tribal court, where the Sixth Amendment does not apply and Bryant was therefore not entitled to have a lawyer appointed to represent him.  Bryant contends that, even if the tribal-court convictions themselves did not violate the Constitution, using those convictions to expose him to a prosecution under Section 117(a) does violate the Sixth Amendment.

Arguing on behalf of the United States, Assistant to the Solicitor General Elizabeth Prelogar, representing the United States, started with the big picture.  Congress, she reminded the Court, enacted Section 117(a) to respond to an epidemic of domestic violence in Indian country.  And although Bryant may not have been represented by an attorney when he was convicted in tribal court, that doesn’t mean that the government can’t rely on those tribal-court convictions to prosecute him under Section 117(a) for two later incidents of domestic violence – prosecutions in which, she emphasized, Bryant was represented by an attorney.  Without a constitutional defect in the tribal-court proceedings, she summarized, there is no constitutional problem with the federal charges.  Prelogar made substantial headway into her opening statement before being interrupted for the first time; at several points, she seemed to pause and wait for a moment before resuming, almost as if she expected one of the Justices to jump in. 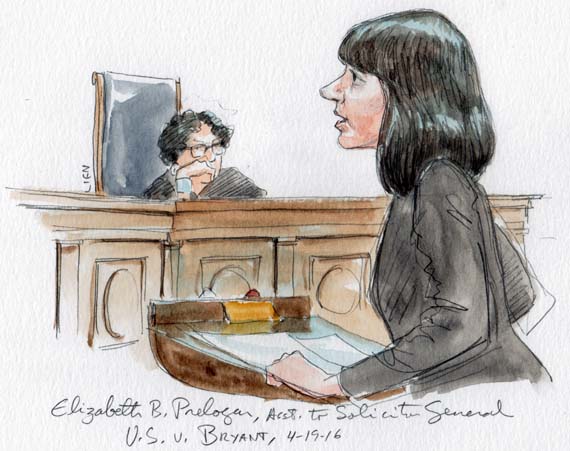 Elizabeth B. Prelogar, Assistant to the Solicitor General (Art Lien)

A concession and an omission loomed large during the oral argument and could scuttle any hope of victory that Bryant might have otherwise had.  Arguing on Bryant’s behalf, Assistant Federal Public Defender Steven Babcock also tried to focus on the big picture.  “The right to counsel is fundamental and essential,” he reminded the Court.  Turning an uncounseled tribal-court conviction into a predicate offense, he continued, “runs afoul” of that right, which rests on a “core concern” that convictions can only be regarded as reliable if the defendant is represented by an attorney.

But, Justice Ruth Bader Ginsburg interjected, Bryant had already conceded that the federal government could have relied on his tribal-court convictions to establish his eligibility for prosecution under Section 117(a) if he had received a fine rather than a prison sentence.  This concession – which Prelogar had emphasized earlier – seemed to find traction with some of the Justices because it would suggest that the rule Bryant was asking them to adopt actually has very little to do with Sixth Amendment concerns about reliability.  After all, this line of thinking goes, there would be no reason to think that an uncounseled conviction that results in a fine is somehow more reliable than one that results in jail time. 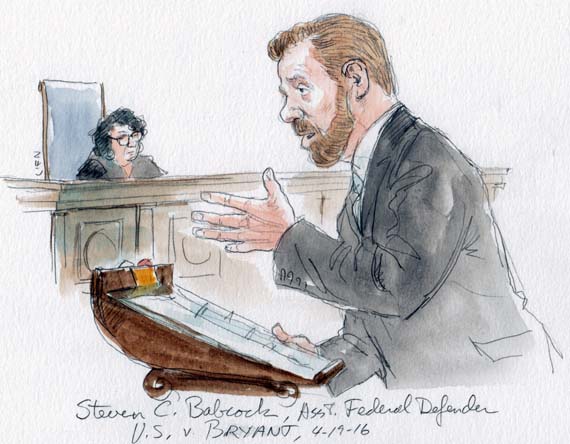 Babcock tried to explain that, under the Supreme Court’s earlier cases, a key distinction is whether incarceration will follow from an uncounseled conviction, but Justice Anthony Kennedy appeared unconvinced.  He complained that the distinction that Babcock was trying to draw was “quite formalistic” and didn’t “have anything to do with inherent reliability or unreliability.”  If anything, he suggested, a judge presiding over an uncounseled defendant’s trial on felony charges might be “much more careful than he would be in a misdemeanor case.”

Perhaps somewhat surprisingly, Chief Justice John Roberts seemed the most skeptical of the government’s position.  (Having said that, Roberts is also the member of the Court most likely to play devil’s advocate at oral argument, so his tough questions for Prelogar should be taken with a grain of salt.)  Roberts worried out loud about the possibility that a defendant like Bryant simply might not bother to challenge a tribal-court conviction even if he wasn’t represented by a lawyer, because the punishment wasn’t especially harsh.  In a scenario like this, Roberts wondered, can those convictions really be used against him, to help convict him on much more serious federal charges?

Prelogar stood her ground.  “Yes, I think he is stuck” with those tribal-court convictions, she told Roberts.  “Although the stakes might be higher,” she continued, there’s nothing fundamentally unfair about relying on the tribal court convictions.  Later, she added that Bryant had another option to avoid having his tribal-court convictions used against him in a federal prosecution:  “what he should have done is stop abusing his domestic partners.”

Although Roberts was the most vocal critic of the government’s position, his questions also reflected a potentially broader concern on the Court about whether and how a defendant could challenge the fairness and reliability of the tribal-court convictions on which the government is relying to bring new charges under Section 117(a).  Prelogar seemed to acknowledge that a defendant could, at least in theory, “try to raise some kind of case-specific, individualized objection” to his tribal-court convictions.  But the Court doesn’t need to reach that question in this case, she emphasized, because Bryant “never attempted to argue that there was anything wrong with his prior tribal-court convictions.”

Justice Stephen Breyer returned to this point later, asking Babcock whether he had argued in his briefs before the Supreme Court that “the sentence, the proceeding in the Indian court violated the Federal Constitution.”  When Babcock admitted that he had not, Breyer countered:  “I don’t see how you can get around the fact that you haven’t complained” that Bryant’s earlier convictions were invalid.  For Breyer and the other Justices, that may have been enough to settle the point in the government’s favor, at least for this case.

Like Prelogar before him, Babcock sat down early.  But in his case, there was less of a sense that the Justices’ questions had dropped off because their curiosity had been satisfied; if anything, it almost seemed as if the Court had already mentally moved on to the next argument.  If so, it could be bad news for Bryant.