Argument analysis: An unremarkable gun case may be harbinger of things to come

Yesterday’s argument in Voisine v. United States appeared to indicate a rather unremarkable win for the government, until Ilana Eisenstein, Assistant to the Solicitor General, attempted to close early in the face of a quiet bench, invoking the usual “if there are no further questions . . . .” At that moment, Justice Clarence Thomas broke his remarkable decade of oral argument silence, asking “one question,” a difficult one that was beyond the scope of the certiorari grant in this case, but which likely provides a window onto things to come at the Court now that the late Justice Antonin Scalia is gone. While a majority appears likely to rule against the defendants in this criminal gun possession case, Justice Thomas’s questions (he ultimately asked nine) indicate not only that he may feel the need to fill in for the absence of Justice Scalia’s voice at oral argument, but also that he may write a separate opinion here to advance serious Second Amendment arguments that the Court will soon have to confront.

Not much support for Voisine’s statutory argument

As explained in my preview, Stephen Voisine was convicted under one of the many federal statutes that ban gun possession for people suffering from various listed disabling conditions. One category of individuals who can be federally prosecuted if found to possess a gun is those who have previously been convicted “of a misdemeanor crime of domestic violence.” Another federal statute then defines such a crime as one committed against a victim who has a domestic relationship with the defendant, in violation of a statute that has “as an element, the use or attempted use of force.”

Voisine (together with William Armstrong, who then consolidated his arguments for certiorari with Voisine’s) were previously convicted of misdemeanor domestic violence assaults in Maine, under a state statute that permits conviction for injury or offensive physical contact to another person if committed “intentionally, knowingly, or recklessly.” Voisine now contends that under a “categorical approach” to this statute, his prior convictions should not count for federal purposes because, he contends, a “reckless” assault cannot constitute the “use of physical force” required by the federal law. The Court has twice previously reserved this general question, without opining, and the circuits are in conflict.

Yesterday’s transcript reveals, however, a rare criminal case in which Justices Ruth Ginsburg, Sonia Sotomayor, and Samuel Alito were all apparently quickly in agreement, within the first four pages, against Voisine. As Justice Alito immediately pointed out, someone can touch another person and it can be “recklessly” offensive – that is, the offensiveness need not be intended, so long as the touching was. A case from Maine was cited by Virginia Villa (arguing for Voisine) in which the defendant intentionally reached under a blanket to wake someone, and “recklessly” touched her naked body. But Justice Alito, and later Justice Elena Kagan, both indicated that this example appeared to support the government, not Voisine.

Villa also argued that the common law did not recognize “reckless” batteries – a point with which the government flatly disagrees. But Justice Anthony Kennedy instead asked, “what … indicates that the Federal statute tracks the common law? The Federal statute gives its own definition.” Villa noted that her common law requirement was “only because of Castleman” v. United States. But that 2014 case said only that the federal statute “incorporates the common-law meaning of ‘force,’” not that a common-law definition of all its terms must control. As Justice Kennedy noted, “the statute doesn’t say the word ‘battery.’ It doesn’t use it.” Justice Alito later echoed this same point, and Justice Kagan indicated that, regardless of the common law’s intricacies, the “ordinary meaning” of “use of force” can encompass “reckless behavior.” Justice Kagan, the former Harvard law professor, then led Villa through an almost Socratic dialogue on the question.

Justice Ginsburg then noted that this statute was written expressly for the domestic violence context, and that “many domestic violence situations would be not be” reached under Voisine’s argument. And Justice Alito suggested that it is not “realistic” to believe that state prosecutors would “look ahead to the consequences of” future federal firearms law applications. By my count that is five of the eight Justices lined up solidly against Voisine’s position (and Justice Breyer, who has been uncharacteristically quiet these last two weeks, also seemed so inclined in his brief questions at the end of the hour).

One last notable point: anyone who suggests that Justice Ginsburg may be slowing down, should read the last two pages of Villa’s argument. Villa suggested what seemed like a difficult hypothetical: what if she “came up to somebody who I thought was my husband and I patted him on the back and said ‘hi, honey,’” but it wasn’t him? Could that be a reckless offensive touching? But when Justice Sotomayor appeared momentarily slowed by this example, Justice Ginsburg incisively noted that “there isn’t a [domestic] relationship [as] the statute requires.” “That is true,” conceded Villa, and she quickly reserved the remainder of her time.

The government runs into little opposition

Assistant to the Solicitor General Eisenstein then rose for the government, and she was permitted to speak uninterrupted for a relatively long time. Chief Justice John Roberts finally intervened, in what reads like a somewhat half-hearted attempt to at least make the government work a little. Justice Kennedy likewise probed a bit; and when Eisenstein suggested that the Court ought not worry about the “rare case” where an innocent act might be prosecuted as a “reckless battery,” Justice Kennedy quickly indicated that the Court does not usually accept a “trust the prosecutors” argument. [Although as an aside I will note that there are some criminal precedents from forty to fifty years ago that come close.] The bottom line, however, is that after a short eleven pages of argument and no interruption toward the end, Eisenstein asked “if there are no further questions” and sought to sit down.

But Justice Thomas politely denied Eisenstein that opportunity. “Ms. Eisenstein, one question.” In-court observers report that the sound of Justice Thomas’s voice drew surprised reactions from some. He allegedly last asked a question during oral argument on February 22, 2006. As we know, Justice Scalia had previously represented an extremely lively bench. Rarely did lawyers get to sit down early. Perhaps Justice Thomas simply found himself with surprising space to ask questions, a space previously was occupied by others. In any case, with what I’d estimate was about ten minutes of the government’s thirty minutes still available, perhaps Justice Thomas found himself with a relaxed opportunity, normally not available, to speak his mind. And perhaps, with Justice Scalia gone, such spaces will occur more frequently in the future. 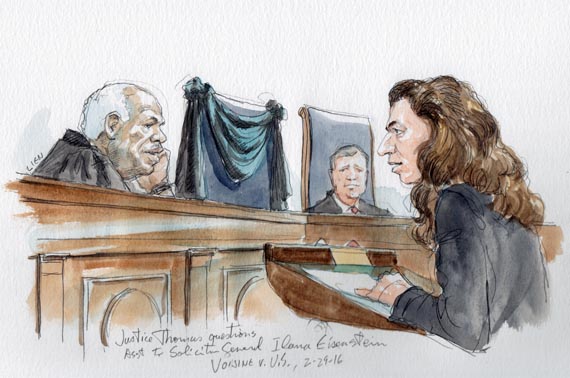 But also, perhaps, Justice Thomas was particularly enlivened by the specific topic of this case. Gun possession – a topic on which he (joined by Justice Scalia) is known to feel strongly about, and about which he recently wrote in a December dissent from denial of certiorari. In Friedman v. Highland Park, Justice Thomas contended that “[t]here is no basis for a different result [in analyzing governmental actions] when our Second Amendment precedents are at stake.” So yesterday: “One question. . . . [T]his is a misdemeanor violation. It suspends a constitutional right. Can you give me another area where a misdemeanor violation suspends a constitutional right?”

“I – I’m thinking about that,” hesitated Eisenstein – unsurprisingly, not only because it is a difficult (but not unanswerable) question, but also because the Court had clearly limited its grant of certiorari in this case to the statutory question, expressly denying review on the Second Amendment issue which Voisine had also included in his cert. petition. Yesterday, with minutes to spend, Justice Thomas pursued the question with Eisenstein for five pages, half again as long as Eisenstein’s entire argument up to that point. Eisenstein performed well enough, for a question not presented, and Justices Kennedy and Breyer both came to the rescue at the end. Justice Kennedy noted that registration requirements for sex offenders might qualify; and Justice Breyer noted that only the statutory question was presented in the briefs so “we don’t have to decide that here.” “That’s correct, Your Honor,” Eisenstein responded, and relievedly sat down.

Of course, some criminal convictions support probationary search and seizure conditions; others can support lengthy bans on, say, certain associations or computer and internet use. Further answers to Justice Thomas’s concerns are certain to be developed. But still, the Second Amendment question raised by Justice Thomas – and dozens of similar questions relating to gun control – will not go away anytime soon. Perhaps Justice Thomas simply wanted to give voice to concerns that he knew Justice Scalia shared. And that, too, may be a harbinger of future Court proceedings.

And so an unremarkable statutory case, seemingly going the government’s way without much argument, turned into an uncommon news event that also previewed difficult constitutional questions for the future. Villa’s two minutes of rebuttal went by without a question – perhaps the Justices, too, were simply stunned by Justice Thomas’s unexpected and powerful awakening. My bet is that we have not heard the last from Justice Thomas, on this or other significant issues, now that his longtime benchmate is no longer with him.