Argument analysis: A likely decision in favor of retroactivity?

If it is true that the side that gets the most questions in a Supreme Court argument usually loses, then Gregory Welch, who filed pro se typewritten habeas pleadings as well as his petition for certiorari, should be less glum today. (Welch is serving fifteen years in federal prison and it is not certain that he will benefit even if the Court decides this particular case in his favor.) Of course it is silly to predict results based solely on oral argument. But at yesterday’s argument in Welch v. United States, the Justices allowed Welch’s lawyer, Amir Ali (who was arguing at the Court for the first time) to speak for paragraphs without interruption, while most seemed actively unreceptive to arguments by Helgi Walker, whom the Court had appointed to defend the judgment below. Even Deputy Solicitor General Michael Dreeben, who in a relatively unusual stance was arguing in support of petitioner Welch that the decision below should be reversed (hence the court-appointed amicus), and who tried to push the Justices toward the government’s view on a Sentencing Guidelines question not presented in the case, spoke with little interruption. 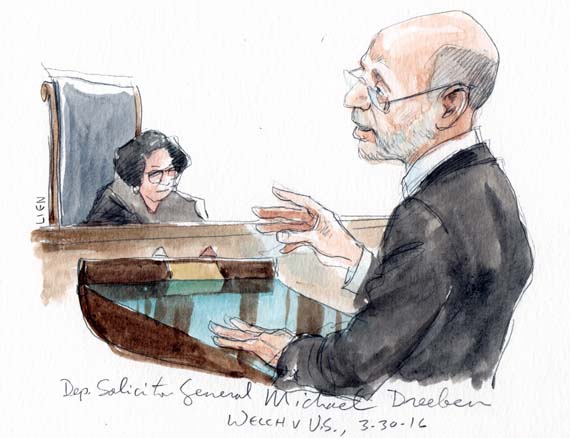 While it is not possible to describe the intricacies of retroactivity doctrine here – let alone wise if we want to keep our readers awake – it looks like last Term’s decision in Johnson v. United States will be declared to apply retroactively for all purposes, including on first and even successive (assuming they are timely filed) habeas corpus petitions. And as I explained in my preview, that result is likely, although not certain, to result in substantial sentencing reductions for a significant number of convicted federal defendants.

Some thirty years ago, Congress provided that while a felon convicted of possessing a firearm might be sent to prison for up to ten years, a subset of those felons – those with three prior convictions of a described type – should go to jail for a minimum of fifteen years. The final part of the statute that described the qualifying prior convictions for this fifteen-year mandatory minimum (the Armed Career Criminal Act or ACCA), was called the “residual clause,” a catch-all general provision designed to capture other types of prior conviction for “crimes of violence” not specified earlier in the statute.

At the end of last Term, Justice Antonin Scalia wrote for the Court in Johnson that this “residual clause” was unconstitutionally vague, basically because for years the Court had been unable to define it clearly enough to predictably guide lower courts. The “void for vagueness” doctrine that Johnson employed is viewed as a protection subsumed within the constitutional Due Process Clauses, based on concerns about fair notice and unconfined law enforcement discretion. Based on Johnson’s application of this doctrine, no federal defendant can now receive more than ten years if his prior convictions are counted only under the residual clause rather than specifically identified elsewhere in the ACCA.

Welch was convicted as a felon in possession of a firearm. Because he was sentenced well before Johnson, the district court relied on the residual clause to “count” one of his prior Florida robbery convictions and sentence him to the enhanced fifteen-year mandatory minimum. (The court speculated that this conviction might also qualify under a different part of the ACCA, the “elements” clause, and that question probably remains open on remand. So Welch may not get a sentencing reduction even if Johnson is fully retroactive.) Welch’s appeals were unsuccessful and were all final before Johnson. But (due to procedural twists not relevant here), after the Court issued its decision in Johnson Welch filed pro se habeas pleadings asking for a sentencing reduction on the ground that his prior “residual clause” conviction should not count. The Eleventh Circuit denied him relief, but the Court granted his pro se petition.

(Why Welch’s petition? Because successive habeas petitions (which Welch’s is not) cannot statutorily get relief unless a new rule is declared retroactive by the Supreme Court, and Congress has imposed a one-year limitations period on successive petitions. The Court was looking for a fast vehicle to answer the retroactivity question before a year passed after Johnson, which was issued on June 26, 2015.)

It is settled that any new Supreme Court criminal-law decision applies to all cases that are not yet “final” on the day the Court’s decision issues. But what about cases that are already final (that is, the conviction and all challenges to it on direct appeal have been resolved before the new decision issues)? This question of “retroactivity” has troubled courts for decades. But based on the writings of a the late Justice John Marshall Harlan II, the Court has decided over time that new “substantive” constitutional rules should apply retroactively to everyone, even “final” cases, while new rules that can be described as merely “procedural” should not. The question before the Court yesterday was, into which category should the void-for-vagueness ruling in Johnson fall?

Should the Court look at the effect, or the source, of the new rule?

This case was briefed on an expedited schedule so that it could be argued and decided this Term, and the reply briefs (which, as a result of the expedited schedule, were filed only a week before oral arguments), as well as yesterday’s transcript, made one thing clear: there is a simple “effect” versus “source” battle here. Welch and the federal government argue that the “effect” of a new rule should determine whether it is substantive, and thus fully retroactive. By contrast, Walker, defending the judgment not to apply Johnson to Welch, argues that if the “source” of the new rule is a procedural constitutional provision, then the rule cannot be substantive – the “effect” is irrelevant. 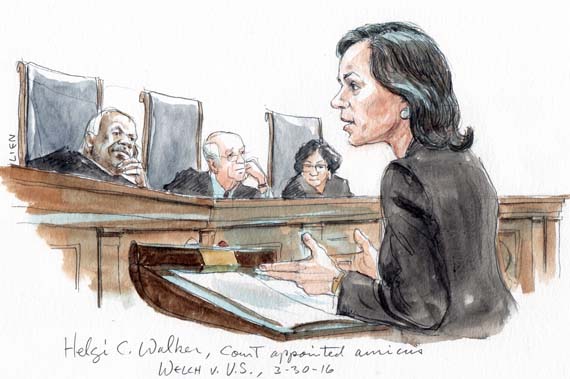 My perception based on yesterday’s transcript is that a majority seems ready to adopt the “effects” test, in which case it appears that Welch will win. (Justice Samuel Alito, likely not on Welch’s side, raised a preliminary question – which he described as “possibly irritating” – whether Welch had ever clearly raised the vagueness question. But this suggestion drew no vocal support, and Ali said “it doesn’t matter” because it is clear that Welch was sentenced under the now-unconstitutional residual clause.)

How can it not be substantive when, under one rule, the sentence range goes minimum 15 years up to life, and the other reading, it’s zero to ten years? I can’t imagine anything more substantive than five extra … years in prison.

Justice Stephen Breyer reacted similarly. When Walker told him that people convicted “many years ago” under a statute the Court later declares unconstitutional don’t “get out,” his reaction too was visceral: “Well, that amazes me.” Justices Sonia Sotomayor and Elena Kagan also seemed clearly disposed to that view. But most significantly (because this eight-member Court still needs five votes for a merits ruling), Chief Justice John Roberts, who generally tries not to tip his hand too one-sidedly, seemed, in a relatively long and complex dialogue with Walker, to be focused on the effect of the new Johnson ruling, rather than its source in the Due Process Clause. Walker did an excellent job of describing and defending the other side of the question, and the Chief Justice closed by bestowing on Walker the traditional “You have ably discharged th[e] responsibility” of “amicus curiae in supporting the judgment below.” But it seems likely that that judgment will be reversed.

As an aside, the Chief Justice also noted that Johnson creates a “problem” of some complexity, since prior decisions of the Court had definitively applied the residual clause to specific types of crimes — rejecting Justice Scalia’s vagueness dissents. So now the Court, he suggested, must “think Johnson suggests those [previously definitive] decisions were not clear.” Justice Scalia was, of course, not present to clear up any confusion his Johnson opinion may have created.

Justice Anthony Kennedy’s questions yesterday were – as is often the case – somewhat Delphic, while Justice Alito did not speak to the effects-source question and Justice Clarence Thomas did not speak at all. But a six-to-two ruling or better, in favor of Welch’s (and the federal government’s) position, would not surprise me.

What about the Sentencing Guidelines?

It should be noted that Dreeben ably attempted to engage the Court on the effect of Johnson on a similarly worded federal Sentencing Guidelines provision, and he argued that even if the Guidelines provision is now void, that ruling (unlike the residual clause) should not be applied retroactively to sentences that were final before Johnson. Sentencing Guidelines that are discretionary are procedural, in the government’s view. When Ali was asked about this during his rebuttal, he wisely steered clear of opining on an issue not presented by his case, noting merely that the Guidelines situation “can be distinguished.” Indeed, Ali exhibited great poise for his first argument, including sitting down early (only eight pages in) when the Justices appeared to be going his way and questions had ceased. 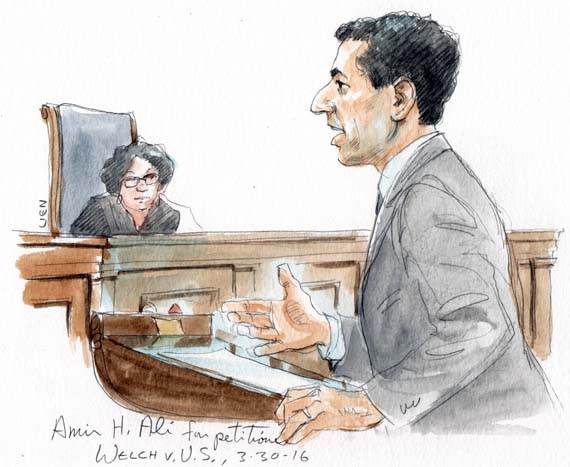 The law of retroactivity presents intellectual conundra that may never be fully settled. The decision in this case is likely to be simply one more precedent in the wavering doctrinal line. We will never know what Justice Harlan, or Justice Scalia, thinks of it. But convicted federal felons whose sentences are reduced by five or more years will not care about the intricacies, while young law professors aspiring to tenure will have new grist for their mills.