Argument analysis: Will defendant lose the battle but win the war in sentencing case?

In my preview of Molina-Martinez v. United States, I suggested that petitioner Saul Molina-Martinez’s attorney would face an uphill battle trying to convince the Justices to adopt a presumption of prejudice as part of plain-error review when a sentence was based on an erroneous guideline range not noticed until appeal. Consequently, it was not surprising that, during yesterday’s oral argument, many Justices expressed concern about what the proposed presumption of prejudice would practically entail in this setting. But it was surprising that many Justices, including Chief Justice John Roberts, still seemed drawn to Molina-Martinez’s more general claim that guideline misapplication is a unique type of error that may often be alone sufficient to satisfy a critical prong of plain-error review.

Molina-Martinez, a Mexican citizen with a long criminal record, was charged with and pleaded guilty to being unlawfully in the United States after having been deported for an aggravated felony. A Presentence Report (PSR) calculated his advisory sentencing-guidelines range to be 77 to 96 months of imprisonment. At sentencing, the district court adopted the PSR’s calculations; the court thereafter heard the prosecution advocate for “a high end sentence of 96 months” while Molina-Martinez’s counsel argued for a 77-month (bottom-of-the-guideline-range) prison term. The district court sentenced Molina-Martinez to 77 months of imprisonment.

On appeal, Molina-Martinez figured out, and the government conceded, that the district court had erred in calculating his advisory guidelines range: with his criminal history properly scored, Molina-Martinez should have faced a proper guideline range of 70 to 87 months, instead of 77 to 96 months. The Fifth Circuit held that this claim was reviewable only for plain error under Federal Rule of Criminal Procedure 52(b), and it concluded Molina-Martinez had not established that the guideline error affected his substantial rights to satisfy the requirements for plain-error review. In so doing, the Fifth Circuit rejected Molina-Martinez’s contention, based on Supreme Court dicta in United States v. Olano and rulings in two courts of appeals, that any error in calculating a guidelines range should be considered presumptively prejudicial. In the Fifth Circuit’s view, because Molina-Martinez’s sentence fell within both guidelines ranges, he had “to point to ‘additional evidence’ in the record, other than the difference in ranges, to show an effect on his substantial rights.”

In his argument to the Justices on behalf of Molina-Martinez, Assistant Federal Public Defender Timothy Crooks astutely started by stressing the Court’s recent ruling in Peugh v. United States, which made much of the guidelines’ continuing centrality to federal sentencing even though they are now advisory. Crooks asserted that, because of “the strong anchoring effect of the Guidelines, . . . the natural effect of an erroneously high Guideline range is to skew a defendant’s sentence higher than it would have been under the correct range.” 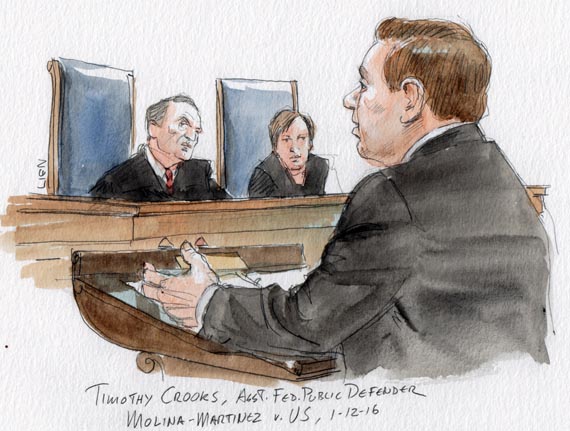 As the argument unfolded, the Justices did not seem to dispute this important premise about the guidelines’ continuing importance, and that reality may in the end help carry the day for Molina-Martinez. But many Justices were quite resistant to the contention that they should formally adopt a presumption of prejudice that could readily enable an appellant to satisfy the required plain-error showing that a forfeited error had a reasonable probability of affecting the outcome. Through sharp questions about the practical impact of adopting Molina-Martinez’s proposed presumption, Justices Samuel Alito and Antonin Scalia stressed that such a presumption would functionally shift the burden of proof to prosecutors to show that any guideline calculation was harmless. These questions highlighted concerns about making the government’s burden to defend a sentence on appeal the same for unpreserved errors under plain-error review as it is for preserved errors under harmless-error review.

Responding to these concerns, Crooks stressed that plain-error review included requirements other than just a showing of prejudice so that his proposed presumption would not completely collapse the two distinct review standards under Rule 52. But other Justices, perhaps recognizing the force of the concerns expressed by Alito and Scalia, were quick to suggest that these arguments about the distinctive import and impact of guidelines-calculation errors were forceful and did not require the creation of a formal presumption of prejudice for Molina-Martinez to prevail in this setting.

Justice Stephen Breyer, revealing an affinity for the sentencing guidelines he helped create and also for cutting through legal jargon, suggested that applying a little “common sense” was sufficient to resolve this case. In his early questions to Assistant to the Solicitor General Scott Meisler, representing the United States, he stressed the Court’s various rulings that the guidelines should still play an anchoring role in federal sentencing. Breyer revealed his concern that a ruling in the government’s favor would require the Court “to overcome about five cases [in which it suggested the] common sense notion that of course using the wrong Guideline had an effect on the sentence.” Breyer later followed up this point by voicing his view that the case is “not about how to interpret Rule 52(b) [concerning plain error review], or 52(a) [concerning harmless error review], or Olano. It’s a case about Guidelines. It is a case about what the Guidelines are and how they affect a sentence.” 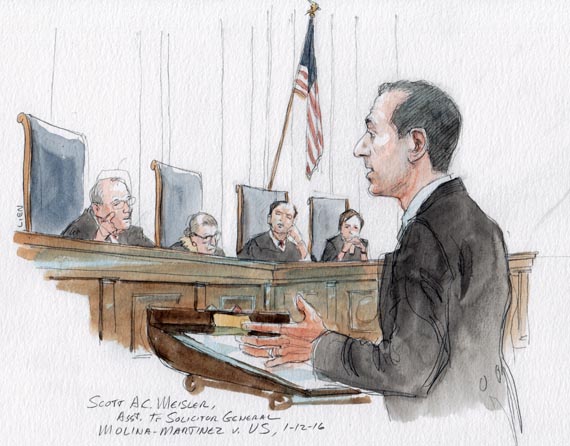 Intriguingly, even Justices usually more sympathetic to prosecutorial concerns seemed drawn to Molina-Martinez’s claim that the unique import of the sentencing guidelines make calculation errors alone sufficient to establish a reasonable probability that a defendant’s substantial rights were affected for plain-error review purposes. Chief Justice John Roberts, for example, seemed convinced that a wrongly calculated guideline range would generally affect how a sentencing judge selects what sentence to impose; he also explained to Meisler that, because “district judges need not, [when] the sentence is within the Guidelines, … say anything at all,” it necessarily will be “very difficult for the defendant to go back [and find additional evidence of the impact of] a plain error in what the original calculation was.” And even Alito told Crooks that his “argument has some appeal on the facts of this case because the judge sentenced the defendant to a sentence at the bottom of what the judge understood to be the Guideline range.”

In the end, because nearly all the Justices expressed reservations about adopting a formal doctrine that might water down the traditionally tough standards of plain-error review, Molina-Martinez’s counsel seems likely to lose his doctrinal battle to convince the Court to adopt a prejudice presumption in this setting. But because many Justices also expressed support for the idea that erroneous guideline calculations will often be consequential, Molina-Martinez’s counsel may still win this appellate war by securing a reversal of his client’s sentencing based on the particular case facts. And the ultimate impact and import of this case likely will now to turn on whether the Justices are content to resolve this case via a very fact-specific ruling or decide instead to articulate in broad strokes the Court’s general views on how plain-error review should be handled in the common context of federal-sentencing appeals.