The Court opened its new Term this morning with oral arguments in a California woman’s case against the Austrian national railroad:  Carol Sachs is seeking to hold the railroad responsible in U.S. courts for an accident in which she lost both of her legs, while the railroad argues that a 1976 law, the Foreign Sovereign Immunities Act, bars lawsuits against it.  Sachs counters that her lawsuit should still be allowed to go forward because the FSIA contains an exception for claims based on a country’s commercial dealings in the United States.  (I covered more details of her lawsuit in my preview of the case.)  By the end of the hour, the Justices appeared skeptical that Sachs’s claims had enough of a connection to the United States to be allowed to proceed under the “commercial activity” exception, although it was not clear on what legal grounds they might rely to reach their decision. 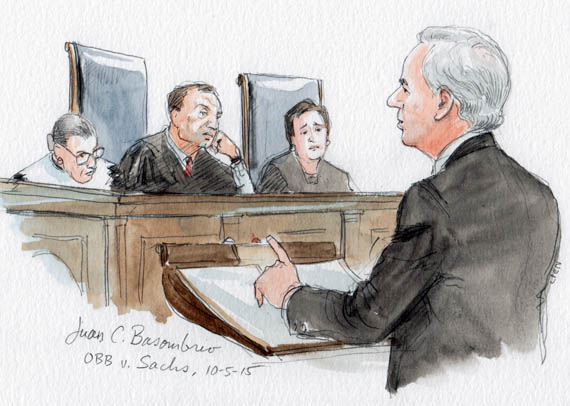 Arguing on behalf of OBB Personenverkehr, the Austrian national railroad, attorney Juan Basombrio focused almost exclusively on the second of the two questions that OBB had asked the Court to consider:  what test courts should use to determine whether a lawsuit is “based upon” commercial activity in the United States.  The Justices’ apparent lack of interest in the first question in the case – how courts should determine whether OBB can be sued in U.S. courts for the actions of the travel agency that sold Sachs her Eurail pass – was an encouraging sign for OBB, which only needs to win on one question to halt Sachs’s lawsuit:  if any of the Justices sympathetic to OBB believed that the railroad was in any real danger of losing on the “based upon” question, they would likely have turned the conversation to the other question in the hope of salvaging a victory on that ground.

It was not entirely smooth sailing for OBB, however, as Basombrio quickly ran into questions about one of Sachs’s central arguments – the idea that Congress intended for foreign governments that engage in commerce to receive the same treatment as a private corporation.  And if that’s true, Justice Elena Kagan suggested, then foreign governments should be subject to essentially the same (and potentially less stringent) test that would be used to determine whether a court has jurisdiction over a private foreign corporation.  But Deputy Solicitor General Edwin Kneedler, arguing on behalf of the United States, pushed back against that idea, emphasizing that courts should look only to the language of the FSIA, which “draws a strict territorial line” that focuses on activity in the United States. 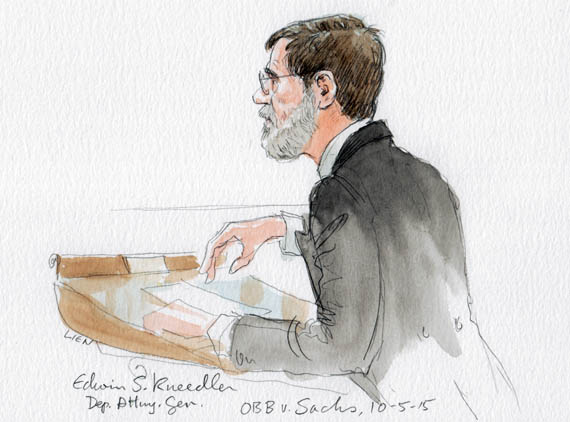 More significantly, though, several Justices seemed troubled by the idea that, despite having purchased her ticket in the United States, Sachs was attempting to recover for injuries that occurred in Austria.  Justice Ruth Bader Ginsburg was the first to voice these concerns, telling Jeffrey Fisher – representing Sachs – that, although Sachs had purchased her Eurail pass in Massachusetts, “that’s all that happened in the United States.”  Kagan picked up on this theme, telling Fisher that, if she purchased a ticket to the Vienna Opera in the United States but slipped and was injured while actually attending the performance in Vienna, she would not expect to be able to sue the opera in the United States.  Fisher emphasized that his client’s lawsuit was not based on the ticket sale itself, but instead on the fact that the railroad had violated its obligation – created by its sale of the ticket to Sachs – to operate the railroad safely.  But it’s not clear that his argument gained any real traction, as reflected by Justice Stephen Breyer’s suggestion that the distinction was just “clever pleading” to get around the problem that the accident in which Sachs was injured took place in Austria. 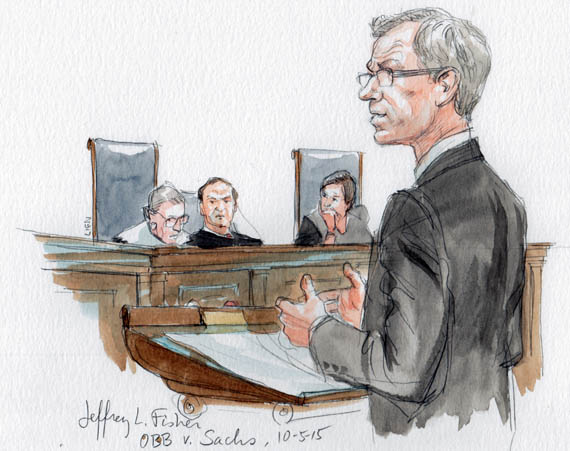 Although the extent to which the U.S. Supreme Court should look to other countries’ laws to interpret the U.S. Constitution is often a hotly contested topic, international law could play an important role in this non-constitutional case, further tipping the scale toward a ruling for OBB.  Kneedler emphasized that, under the European Immunities Convention, for example, personal injury lawsuits against a foreign country for injuries that occurred there can only be brought in that country.  And Breyer – who in his most recent book argues that, as the world becomes more interdependent, the Court should also consider foreign law and international affairs – told Fisher that although other countries may expect to be sued for commercial activity that gives rise to injuries in the United States, they will expect to be sued at home for commercial activity that gives rise to injuries there.

While the Justices focused on the possible international implications of their ruling, Fisher stressed that the impact on railroad companies like OBB could be relatively limited beyond this case:  even if OBB is not entitled to sovereign immunity, railroads can (and now do) use, for example, provisions in their tickets to require passengers to bring lawsuits in the railroad’s home country, using the home country’s law.  By contrast, Fisher warned, the Court’s ruling will affect many other sovereign immunity cases in which an initial transaction creating a duty takes place in the United States, but one of the parties to the transaction is later injured overseas.  He cautioned that if the Court were to agree with OBB and the United States that courts should look to the “gravamen” of the plaintiff’s claims to determine whether her claims are “based upon” commercial activity in the United States, the uncertainty that would result would create “all heaps of trouble.”

Even that argument, though, may not have achieved its desired effect:  Justice Ruth Bader Ginsburg suggested that the Court could simply rule – without actually adopting the gravamen test – that merely purchasing a ticket in the United States does not satisfy the commercial activity exception’s “based upon” requirement.  Given the Justices’ general misgivings this morning about the wisdom of allowing Sachs’s claims to go forward, that might be a straightforward outcome that can garner at least four more votes.