A View from the Courtroom: The Goldbergs 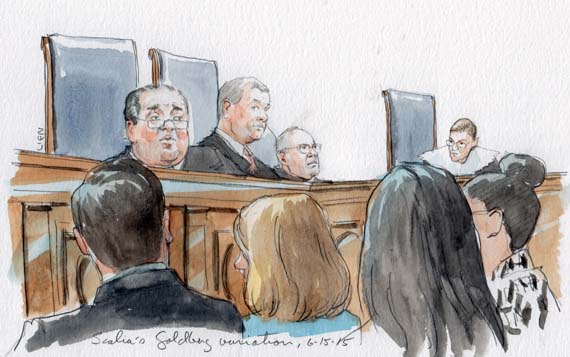 On Saturday, Justice Ruth Bader Ginsburg appeared before the liberal American Constitution Society, where — amid making a wide range of points about her rock-star status, her legacy litigating for equal rights for women, her dissenting practices as a Justice, and same-sex marriage — she referred to the public coming to the Supreme Court to “watch the show.”

Today’s show at the Court will start out rather drily but will build to an amusing finish.

Mary L. Bonauto, the veteran gay-rights lawyer who in April delivered the principal argument on behalf of the challengers to state bans on same-sex marriage, is here today. There will be a mention of the Court’s “right-to-marry cases” from the bench today, but it won’t come in the ruling she is anxiously awaiting.

The Court takes the bench, with Justice Samuel A. Alito, Jr., absent.

Justice Elena Kagan has the decision in Mata v. Lynch, the first of two immigration-related decisions we will get today. The Court, with only Justice Clarence Thomas in dissent, holds that the U.S. Court of Appeals for the Fifth Circuit erred in declining to take jurisdiction over the immigration appeal of a Mexican citizen who faces deportation over an assault conviction but argues that he is due further proceedings because he received ineffective assistance from his attorney.

Justice Thomas is up next, with the opinion in Baker Botts L.L.P. v. ASARCO LLC, about whether a provision of the Bankruptcy Code authorizes attorneys to receive fees for defending their fee applications. (At issue was about $5 million for two law firms, on top of the roughly $124 million they were awarded for their work in a largely succesful bankruptcy proceeding that turned around the fortunes of a large copper-mining concern.)

But after a quick lesson in the “American Rule” on the award of attorney’s fees — requiring each litigant to pay his own fees, win or lose, unless a statute or contract provides otherwise — Justice Thomas tells the Courtroom that the bankruptcy-law provision does not override the American rule with respect to litigation defending the fees themselves.

Chief Justice John G. Roberts, Jr., says that Justice Antonin Scalia will have “the announcement” of the Court in Kerry v. Din.

That choice of words is significant, because there is a difference between a “decision” and an “announcement”: Scalia has only a plurality, rather than a majority, for his opinion in the case of Fauzia Din, a naturalized U.S. citizen and resident whose husband, Kanishka Berashk, is a citizen and resident of Afghanistan.

Din is seeking to have Berashk classified under U.S. immigration law as “an immediate relative,” which would give him priority immigration status. However, the U.S. Embassy in Islamabad, Pakistan, denied Berashk’s visa application.  A consular officer told him he was inadmissible under a provision that excludes those who have engaged in “terrorist activities.” Berashk had worked as a civil servant when Afghanistan was under Taliban rule, but the consular officer would not provide a detailed explanation for excluding him.

Justice Scalia quotes Blackstone from the bench to suggest that Din, the U.S. citizen, has not been deprived of liberty by the government’s denial of her husband’s visa application.

“This Court has attempted to broaden the meaning of ‘liberty’ in the Due Process Clause to include certain implied fundamental rights,” Scalia says. “Even if one accepts this textually unsupportable doctrine, Din’s claim still fails. Although some of our case law speaks of an implied fundamental right to marry, Din has not been forbidden to enter a marriage. And those right-to-marry cases cannot be expanded to include the right that Din argues for—the right to live in the United States with one’s alien spouse—because we identify implied rights not by looking to our case law but by looking to this country’s history and traditions.”

Observers will soon be parsing the written opinions in the case for possible tea leaves about the same-sex marriage cases. But on the bench, Justice Scalia quickly moves to explaining the breakdown of votes in the current case.

He leans back, thoroughly unaware that he has replaced his good friend Justice Ginsburg with the 1960s-era Justice Arthur J. Goldberg. In fact, the Chief Justice has to turn to him and alert him of the error.

“What did I say?” Scalia asks loudly, emphasizing the “I.” The Chief tells him, and without skipping a beat, Scalia says, “Goldberg’s gone.”

“Sorry about that, Ruth,” he quickly adds.

Justice Ginsburg, who is usually stone-faced on the bench despite a wry sense of humor off of it, cannot contain her laughter this time.

Seventeen decisions to go, with the next show set for Thursday.