A View from the Courtroom: International Day 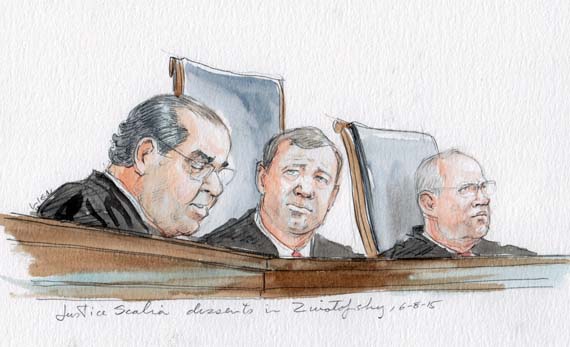 Today will turn out to be international affairs day at the Supreme Court.

The spirit may have been set over the weekend at the Washington Opera Ball, an annual benefit for the Washington National Opera that is traditionally held at a foreign embassy. Chief Justice John G. Roberts, Jr., and Justices Ruth Bader Ginsburg and Samuel A. Alito, Jr., were in attendance Saturday night at the ball held at the German Embassy, according to The Washington Post, which reported that the locale was “a Teutonic tie-in with the opera’s upcoming performance of Wagner’s Ring Cycle.”

Retired Justice John Paul Stevens is in the courtroom this morning. He appears to be wearing a lapel pin on his dark suit, which may or may not be the pin he received at the Court’s annual awards ceremony last month, marking his fifty years of federal government service. Yes, the Court has some of the same rituals of workplaces everywhere, from employee-recognition ceremonies to staff cook–outs.

When the Court takes the bench this morning, the Chief Justice recognizes some visiting international dignitaries.

Roberts announces that Justice Kennedy has the Court’s opinion this morning in Zivotofsky v. Kerry, the oldest outstanding case of the Term.  The question before the Court is the constitutionality of a statute passed by Congress that directs the secretary of state, upon request, to record “Israel” as the place of birth of a U.S. citizen born in Jerusalem. This is an issue because the political standing of Jerusalem is a sensitive foreign-policy matter, and the United States has never recognized any country’s sovereignty over Jerusalem.

Justice Kennedy explains that the Court must address two questions in the case: Does the president have the exclusive power to grant formal recognition to a foreign sovereign? And if he has that power, can Congress command the president and his secretary of state to issue a formal statement that contradicts that earlier recognition?

“Recognition is a matter on which the Nation must speak with one voice,” Justice Kennedy says. “That voice is the President’s.”

He explains that the Court rejects the government’s arguments that it go even further and declare that the president has the exclusive power to conduct all diplomatic relations.

“In a world that is ever more compressed and interdependent, it is essential the congressional role in foreign affairs be understood and respected,” Justice Kennedy says. “For it is Congress that makes laws, and in countless ways its laws will and should shape the nation’s course.”

He turns to the key provision of a 2002 act of Congress, which would allow U.S. citizens born in Jerusalem to list their place of birth as “Israel.” This section – 214(d) – does infringe on the president’s recognition power, Kennedy says.

Despite the Court’s unwillingness to go as far as President Obama’s administration has sought, the decision is a clear victory for the government. Solicitor General Donald B. Verrilli, Jr., who argued the case back on November 3, is not here today. Deputy Solicitor General Ian H. Gershengorn is at the government’s table this morning.

Justice Scalia’s dissent is the main one, and he delivers a summary of it from the bench.

“Before this country declared independence, the law of England entrusted the King with exclusive power over his kingdom’s foreign affairs,” Scalia says. “But when they organized our government, the people of the United States had other ideas.”

The people adopted a Constitution that divides responsibility for foreign affairs between Congress and the president, he says. Whether the Constitution makes the president alone responsible for the recognition of foreign sovereigns is “a difficult question of constitutional law on which the text is silent, precedent contradictory, and history ambiguous,” he continues.

The majority’s “deus ex machina descends from above” to hold that Congress may not require the President or his agents to take actions in official documents that appear to contradict his recognition decisions, Scalia says.

“This principle may sound like it has been custom-made for this case,” he adds. “That’s because it has been.”

“A principle that the Nation must have a single foreign policy, which elevates efficiency above the text and structure of the Constitution, will systematically favor the President at the expense of Congress,” Scalia says. “It is possible that it will make for more effective foreign policy, perhaps as effective as that of Bismarck or King George. But it is certain that, in the long run, it will erode the structure of equal and separated powers that the people established for the protection of their liberty.”

“I respectfully dissent,” he concludes.