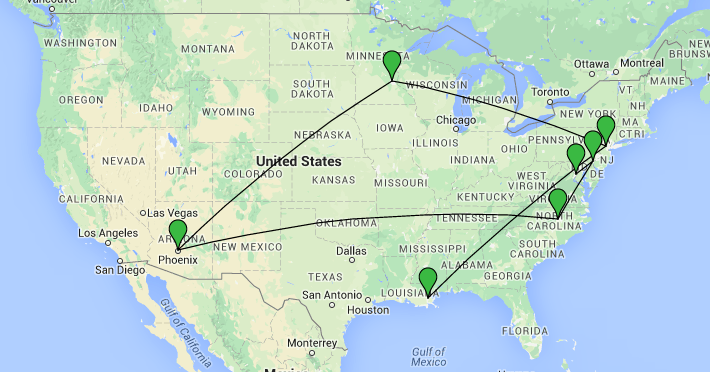 Many of the Justices have favorite cities, causes, or organizations to which they return repeatedly over the years when the Court is not in session.

Last month, on April 8, Justice Stephen Breyer gave a Sixtieth Anniversary Marshall Alumni Lecture to a group of current Marshall Scholars in London. Breyer, himself a Marshall Scholar in 1959, said that the program “made an enormous difference to my life.” Breyer also spoke about international law, a favorite topic of his: “Whether we consider cases involving security and civil liberties or international commerce, cases arising out of treaties, or statutes, or the Constitution, there is no going back. We often will have to consider relevant legal as well as factual circumstances arising beyond our shores.” The text of Justice Breyer’s lecture can be found on the Bingham Centre for the Rule of Law’s website.

On April 9, Justice Clarence Thomas led the Sixty-Eighth Annual Horatio Alger Awards Inaugural Ceremony in Washington, D.C. Justice Thomas is a 1992 honoree of the award, which is given to “accomplished leaders” who have “overcome significant personal challenges to achieve success.”

That same day, Justice Sonia Sotomayor, a native New Yorker, returned to her hometown to speak at the New York Public Library’s Spring 2015 Friends Lecture Luncheon, where she told audience members that “the world around us has politicized what [the Justices] have done.” Sotomayor also expressed discontent with the way the media covers Supreme Court rulings, remarking at one point: “Half the time they’re saying things we haven’t done. They’re writing before they’ve even read the thing.” Tony Mauro covered the lecture for the National Law Journal. Video is posted on the NYPL’s website.

The following afternoon on April 10, Justice Sotomayor headed to Columbia Law School for a Q&A session with students. Sotomayor, who had been invited to speak by the school’s Latino/Latina Law Students Association, encouraged students to choose careers that they loved. “If you’re looking for jobs to pay off student loans only, that’s a recipe for catastrophe. Sacrifice is not something that should scare you away from doing what you want to do.” Coverage is available on Columbia Law School’s website.

Justice Breyer continued his European trip by traveling to Nanterre, France. Breyer, who is fluent in French, gave a lecture titled “The Court and The World” at the Universite Paris Ouest Nanterre La Defense on April 15.

Some of Justice Breyer’s colleagues, meanwhile, chose to stay closer to their workplace. Justice Samuel Alito hosted the Capitol Hill Reception for ABA Day at the Supreme Court building on April 15, which the ABA Washington Letter briefly covered, while the four current and former female Justices gathered at the National Museum of Women in the Arts in Washington, D.C. for an event honoring retired Justice Sandra Day O’Connor. Justice Ruth Bader Ginsburg delivered a tribute to O’Connor: “She has shown time and again that she is a true cowgirl: resourceful, resilient, and equipped to cope with whatever fortune brings her way.” Videos of Justice Ginsburg’s remarks and the award ceremony are posted on the Seneca Women website. Sam Hananel of the Associated Press reported on the event.

On the same day, Justice Scalia was invited to speak at Arkansas State University – Mountain Home. Scalia told students that the Founding Fathers “literally would not recognize” today’s federal government. The Justice singled out the Department of Education and the Department of Health and Human Services in particular, noting that the Constitution says nothing about granting the federal government a role in either area. Thomas Garrett covered the appearance for the Baxter Bulletin.

On April 17, Justice Sotomayor was honored with the 2015 Katharine Hepburn Medal at Bryn Mawr College in Pennsylvania, where she spoke about the importance of mentorship. “As much as I have learned from those who have served as my mentors, I have learned just as much from the relationships in which I have been the mentor.” Bryn Mawr News summarized Sotomayor’s speech, while a short video clip from the award ceremony is available on CBS Philly’s website.

After two weeks of oral arguments, Justices Breyer and Sotomayor closed out the month with a pair of appearances on April 30. For Law Day 2015, Justice Breyer gave a lecture on the Magna Carta at the Woodrow Wilson Center in Washington, D.C. Video of the event, which was livecast, is posted on the Wilson Center’s website. Just one mile away, Justice Sotomayor participated in a luncheon presentation for the ABA Section of International Law’s Spring Meeting, where she discussed diversity on the Court. “To me, diversity on the court should mean diversity of professional experience. And that, we are sorely missing.” Video of the program is available via the American Bar Association.

Looking ahead to May:

Retired Justice John Paul Stevens spoke at the Lawyers for Civil Justice May 2015 Membership Meeting in Washington, D.C., on May 4. Tony Mauro of the National Law Journal and Mark Berman of the Washington Post covered the event, at which Stevens called for Congress to compensate some of the Guantanamo detainees who have remained in custody for years even though authorities had concluded that they were not security threats to the United States. The Supreme Court posted a transcript of Stevens’s speech.

Justice Sotomayor had a busy start to May, appearing at two separate events on two consecutive days. On May 7, she spoke to students at the Icahn School of Medicine at Mount Sinai in New York City, before traveling across Manhattan to meet participants in the New York City Bar Association’s New Lawyer Institute.

The following day, Justice Sotomayor returned to the Icahn School to receive an honorary Doctor of Humane Letters degree at the school’s commencement ceremony. A short video clip of Sotomayor’s commencement speech is posted to the school’s Facebook page. She also traveled to New Jersey for the dedication of the Adler Center for Nursing Excellence at Ramapo College. According to NorthJersey.com, Sotomayor – herself the daughter of a nurse – paid tribute to the profession: “I have a deep appreciation for what special people nurses are.”

On May 9, Justice Sotomayor served as the honorary chair for the 2015 Yale Day of Service. Sotomayor recorded a video message for participants ahead of the event, stating: “My experience has taught me there are no bystanders in life. Our common humanity makes each of us a part of something greater than ourselves.”

Noted opera buff Justice Ginsburg delivered the keynote speech at the Opera Conference 2015 in Washington, D.C., on May 9.

On May 11, Justices Ginsburg and Breyer will serve as judges for “The Trial of Don Quixote,” the annual mock trial and dinner of the Bard Association of the Shakespeare Theatre Company, based on the musical “Man of La Mancha.”

Justice Elena Kagan is scheduled to speak at the May 14 Sixth Circuit Judicial Conference in Detroit.

On May 15, retired Justice John Paul Stevens will give the 2015 Sports Lawyers Association’s 2015 luncheon address in Baltimore, as part of the organization’s forty-first annual conference.

The following day, Justice Sotomayor will be one of the presenters at the Aspen Institute/Kennedy Center Arts Summit in Washington, D.C.

Justice Breyer reprises his “The Court and The World” lecture at the Massachusetts Historical Society in Boston on May 28.

Meanwhile, Justice Thomas joins Akhil Reed Amar and Harold Holzer at a May 28 National Archives event on Abraham Lincoln’s constitutional vision. The program will be livestreamed on YouTube.

On May 29, Justice Ruth Bader Ginsburg receives the 2015 Radcliffe Medal at Harvard University. Retired Justice David Souter will be on hand to give remarks at the Radcliffe Institute annual luncheon, followed by a moderated conversation between Justice Ginsburg and Kathleen M. Sullivan. You can watch the events live online at www.radcliffe.harvard.edu.

The award for busiest Justice, however, goes to Justice Scalia, who is scheduled to appear at seven events in seven different states this month: