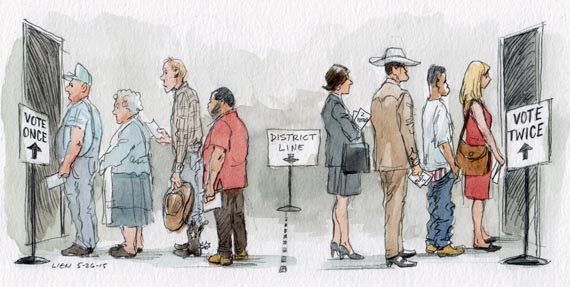 The Constitution has been understood for the past half-century to require that no individual’s vote count more at election time than anyone else’s.  The Supreme Court agreed on Tuesday, for the first time, to clarify how that concept of equality is to be measured, when legislatures are drawing up election districts.

The Court took on a case challenging the 2011 redistricting of the thirty-one seats in the Texas Senate, focusing on what measure of population should be used to judge whether the “one-person, one-vote” mandate has been met.  That mandate originated in Reynolds v. Sims in 1964.  The new case of Evenwel v. Abbott will be heard and decided next Term, as will two new criminal cases the Justices also agreed on Tuesday to hear.

In one of the other cases, Foster v. Humphrey, the Court will clarify the ban on the use of race in excluding potential jurors from the panel at trial — a ban laid down in the 1986 decision in Batson v. Kentucky.  In a Georgia death penalty case, defense lawyers discovered evidence, after the trial, that the prosecutor had created black-juror strike lists contradicting claims of being neutral on race during seating of the jury.

In the other new criminal case, Lockhart v. United States, the Court will spell out when a mandatory minimum prison sentence is required under a federal law against child pornography, based on a prior conviction under state law for sexual abuse.  The federal appeals courts are divided on the scope of that requirement.

The Justices’ move into the Texas Senate redistricting case comes fourteen years after Justice Clarence Thomas, in Chen v. City of Houston in May 2001, was the sole member of the Court who went on record in favor of sorting out “what measure of population should be used for determining whether the population is equally distributed among the districts.”

The usual choice considered by legislatures is to make districts more or less equal by dividing up shares of the state’s total population, or, as an alternative, to draw lines based upon some measure of the voting members of the population — such as the numbers actually registered to vote.

Two Texas voters, who wound up in state senate districts where they say their votes will count less than the votes in another district even though each of those districts has about the same total number of people, argued that this contradicts the “one-person, one-vote” guarantee of voter equality.  Their votes would have counted equally, they contended, if the legislature instead had used voting-age population as the measure.

The voters, Sue Evenwel, who lives in Titus County in Senate District 1, and Edward Pfenninger, who lives in Montgomery County in District 4, said their votes were diluted because of the disparity between the two measures as applied to those districts, where more of the people vote proportionally.  Both districts are rural.  Other, more urban districts have proportionally fewer registered voters, so the redistricting plan based on actual population is said to give those who do vote more weight — that is, fewer of them can control the outcome.

“A statewide districting plan that distributes voters or potential voters in a grossly uneven way,” the two voters told the Court, “is patently unconstitutional under Reynolds v. Sims and its progeny.”

The voters do not argue that legislatures should be forbidden ever to use total population as the districting measure, but only when it results in the kind of disparity, compared to a plan based on voters’ numbers, that resulted in Texas.

At the theoretical core of this dispute is the theory of representation that a legislature should follow.  Texas, supported by the lower court in the new cases, argued that this is a question of how to define democracy, a question that it said should be left to the people’s elected representatives, and not decided by the courts.   The state also contended that the Supreme Court had said explicitly in a 1966 decision (Burns v. Richardson) that the choice of population measure was a matter for legislatures.

The Justices, while taking on new cases for decision, also denied review on Tuesday of a number of significant controversies, including these:

** Whether the mental disability of an individual convicted of murder, and claiming to be too handicapped to be executed, should be analyzed as of the time of the crime, or many years later when the issue arises anew.  That was the question in Murphy v. Texas.

** Whether it is unconstitutional for a local government to shift to out-of-state companies most of the cost of disposing of unsold prescription drugs that may pose a safety or health hazard.  The issue in Pharmaceutical Research and Manufacturers of America v. Alameda County tested the scope of the Constitution’s Commerce Clause to local recycling ordinances.

Posted in Merits Cases, Cases in the Pipeline

Less travel, plenty of royalties for justices in 2020

BREAKING: The court rules in favor of a Catholic social services organization that sued Philadelphia after the city excluded it from a foster-care program due to the organization's refusal to certify same-sex couples as foster parents. https://www.supremecourt.gov/opinions/20pdf/19-123_g3bi.pdf

In second opinion of the day, SCOTUS sides with food giants Nestle and Cargill in a lawsuit brought by six citizens of Mali who say the companies facilitated human rights abuses by purchasing cocoa from plantations in Ivory Coast where they were enslaved as children.

BREAKING: The Supreme Court rejects the constitutional challenge to Obamacare in 7-2 opinion. The court tosses the lawsuit because the challengers do not have legal standing to sue. https://www.supremecourt.gov/opinions/20pdf/19-840_6jfm.pdf

With 18 cases outstanding, the Supreme Court will release opinions at 10:00 a.m. ET.

We will be live blogging on Thursday, June 17, as the court releases one or more opinions in argued cases from...

Monday's decision rejecting sentence reductions for low-level crack-cocaine offenders may have been unanimous, but @ekownyankah writes that there is far more going on than the ruling's dry textual analysis might indicate. Read his incisive analysis here:
https://www.scotusblog.com/2021/06/unanimous-ruling-on-crack-cocaine-disparity-is-heavy-on-text-light-on-history/

After decades, Congress reduced the racially unjust crack/cocaine disparity... raising amounts required for prison time. Why would Congress have left small time dealers to rot in prison for decades?
My thoughts on SCOTUS's ruling in Terry v. United States:https://www.scotusblog.com/2021/06/unanimous-ruling-on-crack-cocaine-disparity-is-heavy-on-text-light-on-history/

No more SCOTUS opinions for today. There are 18 cases still outstanding from the current term, including disputes over Obamacare, religious rights and voting rights. The next opinion day that we know of is Thursday.