In opinions using a boatload of fishing metaphors, a divided Supreme Court ruled on Wednesday that a federal criminal law against destroying corporate records cannot be used against a commercial fisherman for throwing undersized fish overboard to avoid prosecution.  The ruling split the Court’s nine Justices widely on the question of how judges should interpret federal laws.

In the four-one-four ruling in Yates v. United States, Justice Ruth Bader Ginsburg noted in the main opinion that the government had claimed that the 2002 law “covers the waterfront, including fish from the sea” — a sweep that the Court rejected.  Justice Elena Kagan, for the four dissenters, wrote that the other Justices had gone on a “fishing expedition” for support for the ruling, but the effort “comes up empty.” 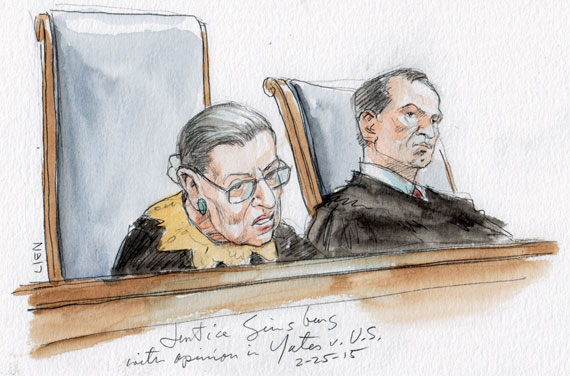 Aside from those flights of aquatic rhetoric, the three opinions the Court issued — the third was by Justice Samuel A. Alito, Jr., seemingly intending to narrow the scope of the outcome — will not make easy reading for ordinary readers.  They are filled with Latin phrases, and arcane musings about modes of “statutory interpretation.”  The two main opinions go on for pages in that way.

Even so, close students of the Court’s work will be poring over those opinions, in search of clues for how the Justices might line up when they confront the issue of how to interpret the language Congress used in writing the new federal health care law — an issue the Justices confront next Wednesday in the case of King v. Burwell.  There are, indeed, many clues here, but how they point on the Affordable Care Act controversy is far from clear.   The Court’s usual ideological line-up was scrambled this time, and that may not be the case on health care, whether other influences may be at work.

The case decided Wednesday involved a Florida commercial fisherman, John L. Yates, who served thirty days in jail after his conviction for violating a section of the so-called Sarbanes-Oxley Act — a law passed almost thirteen years ago to deal with the Enron Corporation accounting scandal.  That episode involved prosecutors’ claims, among others, that corporate files were destroyed when executives began to fear criminal prosecution.

Specifically at issue in the case was the Act’s provision making it a crime to destroy or alter “any record, document, or tangible object” with the aim of obstructing or influencing any federal investigation.  The Court, with Justice Alito making a fifth vote along with the four-Justice plurality in favor of only the result, focused on the phrase “tangible object” and found that it applies only to an object “used to record or preserve information.”   That, the ruling stressed, does not include a batch of red grouper tossed into the sea from a boat like the Miss Katie.

Yates had been prosecuted for destroying “tangible objects” after a fish and wildlife officer boarded his boat and found a number of undersized red grouper.  Federal fishing regulations put lower limits on the size of grouper that may be taken commercially.  A crew member of Miss Katie later said that the captain, Yates, had ordered the disposal of most of the undersized fish, so that they were no longer on board when the vessel reached port and encountered federal agents.

The Wednesday result in plain English:

It is not uncommon for federal prosecutors to use the language of a broadly worded law to pursue cases that may be very different, in facts and circumstances, from those that had led Congress to define a new crime.  That is what happened Wednesday, as the Court read the “tangible objects” destruction language, which the federal government had defended before the Court as covering any physical object, if destroyed or altered to try to thwart a federal probe.

As interpreted by the new decision, prosecutors basically will be allowed to use the law only to deal with the scuttling of papers and electronic files, or any other device that its operator uses to record or store information.