When the government has a dog of a case, someone has to draw the short straw and argue it. In Henderson v. United States, Assistant to the Solicitor General Ann O’Connell drew that straw. It seems clear that the Court will side with petitioner Tony Henderson – a felon seeking the right to sell or otherwise dispose of firearms that he owns but can no longer legally possess. In offering concession after concession and various fallback options, the government offered a case study in controlled implosions. 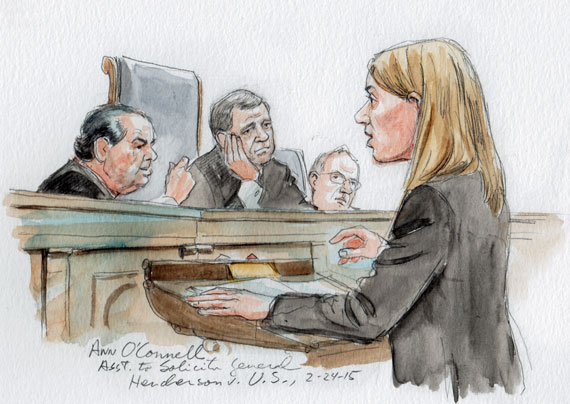 The basic problem in the case is this: Henderson surrendered his firearms collection to the government before becoming a felon and thereby losing his legal right to possess the weapons. In the courts below, the government succeeded in preventing the firearms from being transferred to third parties, such as Henderson’s wife or friend (who would pay for them). This result is quite odd, for Henderson still owned his weapons.

Near the end of its argument, the government explained that it had “tried to correct some wrongs that happened in this case” by changing its position on a number of issues of considerable importance to Henderson and those like him.

Having made all those concessions, the government insisted that the key to the case is to prevent Henderson from having “constructive possession” of his firearms by controlling who ends up with them. This theory purported to distinguish the government’s proposed solution (allowing sale by a licensed firearm dealer) from Henderson’s (allowing the owner to nominate a recipient). As the government put it: “I’m rejecting [Henderson’s] ability to decide who to sell [the firearms] to.”

But it is easy to find fault with the government’s proposed line. Indeed, in one of the few points when Henderson’s attorney, University of Virginia law professor Daniel R. Ortiz, ran into skeptical questions, he was actually assuming the government’s view that there is a legally relevant difference between sale by a firearm dealer and to a friend.  Justice Samuel Alito quickly demonstrated the artificiality of this view, because a friend denied the right to purchase a firearm directly could presumably purchase the very same firearm from the licensed dealer. With that one hiccup, Henderson’s attorney had a remarkably smooth argument, reserving roughly half his time for rebuttal. (He wouldn’t need it.) 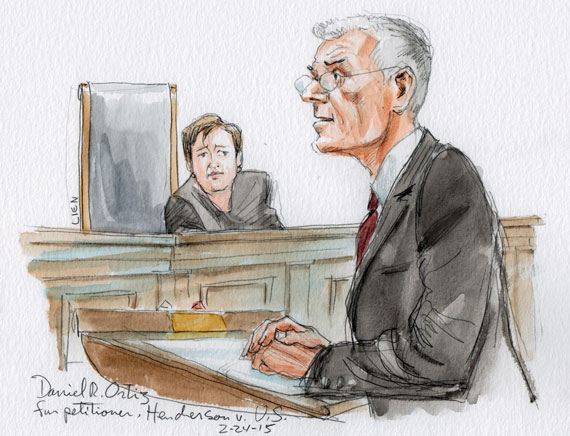 The government’s problems began almost as soon as O’Connell took the podium. Echoing Henderson’s argument that he would never control weapons transferred to third parties, Justice Sonia Sotomayor asked “why this nomination [by Henderson] becomes control over the sale if it’s the judge who’s approving the sale.”

Justice Antonin Scalia separately asked why, on the government’s view, Henderson can lawfully nominate a licensed firearms dealer of his choice, if he can’t nominate a personal recipient or buyer. The government responded in part by emphasizing a logistical point: it’s time-consuming to find licensed dealers. As the government put it, “the agencies that I am here representing, have said they don’t necessarily have the resources to, in every case like this, go out and try to find a firearms dealer to do this.” In other words, the government seemed prepared to allow a kind of “constructive possession” because doing so would be cost-effective for certain federal agencies.

The government added another pragmatic exception when Justice Alito asked what happens when someone has firearms in his home and gets convicted of a felony. The government responded that there “could” be “a statutory background principle that you have a reasonable amount of time to come into compliance” with the prohibition on firearm possession. This naturally led Justice Stephen Breyer to ask: “Well, then why can’t we do that here?” (At another juncture, Justice Breyer expressed some frustration with “what I call the legal mumbo-jumbo.”)

Calling to mind Hangar 51 from the Indiana Jones movies, Chief Justice John Roberts asked what happened to all the surrendered firearms, including antiques and heirlooms, that the government has refused to transfer to third parties. Is it really the case that “[t]hey just sat around gathering dust?” The answer was yes, because the government never has title over the weapons and so does not own them.

The Chief Justice also asked whether Henderson could lawfully direct transfer of the weapons to the federal government itself. The government responded that he could, because the government already had possession. That prompted Justice Elena Kagan to remark: “Well, lucky you.”

Some Justices were unsure where the government’s proposed legal framework came from. As Justice Scalia put it, the government was “building this whole palace,” but the foundation remained obscure. (The government had to promise “that we are not pulling our constructive possession position out of thin air.”) But while Justice Anthony Kennedy and others exhibited some interest in the source of the “equitable” power to make third-party transfers, nobody seemed skeptical that the power existed.

Then there were questions that implicated the government’s evident efforts at balancing what seemed like conflicting loyalties to law enforcement, to the Court, and – above all – to the law. For instance, the Chief Justice asked whether the government has a position on the broad unclean-hands holding issued below. O’Connell responded by disavowing that reasoning, even though the government had advanced it in the courts below, and then apologizing “if that was not clear from the footnote in our brief.”

Perhaps the most difficult moment for the government was when Justice Sotomayor told O’Connell: “I’m a little bit upset at your brief, frankly, because in that circuit, [Henderson] couldn’t know that there was any permissible sale.” Justice Sotomayor’s point was that it’s odd to deny relief to Henderson because he didn’t think to make a request that was forbidden under circuit law. Justice Sotomayor went on to say that it “seems as if the government has set a trap for a pro se litigant.”

Underscoring that charge, the government later cloaked itself in an excuse based on circuit law. When the Chief Justice observed that the government’s many concessions appeared for the first time in its Supreme Court merits brief, O’Connell responded that federal officials “were certainly under the impression that [circuit precedent] controlled.” One might wonder why the same forgiving attitude toward reliance on circuit precedent shouldn’t extend to Henderson. Sensing where the wind was blowing on this point, the government changed yet another position. Instead of asking for affirmance of the judgment below, O’Connell told the Justices that the government “would not oppose a remand” so that Henderson could at least request a firearm sale.

Naturally, the government spun out a back-up position or two in the likely event that its main position is rejected. For example, the government emphasized that “if the Court disagrees with our constructive possession theory,” then it “should certainly make clear in its opinion” that courts are “not required to broker a sale between a convicted felon and his friend.” But even Henderson agrees with that proposition, since he accepts that courts can exercise discretion in approving such transfers.

Ultimately, the government’s numerous concessions seemed inadequate. In its effort to retain some minimal continuity with its prior filings, the government adopted a rule that got virtually no traction. With Justice Breyer rhapsodizing about the utility of judicial discretion and Justice Kennedy suggesting that the intricacies “might best be worked out by lower courts,” it seems likely that the case will go back down to the trial level for reconsideration of Henderson’s transfer requests.

Having directed a bright light on a previously dim corner of the law, the Court has already done most of its work in this case, with just some details to be worked out. Perhaps this sense of inevitability explains why Justice Scalia expressed concern about being “unfortunate enough to get assigned this opinion.”

[Disclosure: John Elwood, a regular contributor to this blog, is among the counsel to the petitioner in this case.]