If Tuesday’s oral argument in Department of Homeland Security v. MacLean is any indication, the Supreme Court appears likely to side with a former federal air marshal and rule that his disclosure to the media of alarming lapses in post-September 11 aviation security was protected by the Whistleblower Protection Act of 1989 (WPA) – and so his termination for that disclosure was unlawful. And although one major clue that such a result may be forthcoming came in the Justices’ skepticism concerning the potentially illusory distinction on which the government’s argument rests, the real key may have been the effective rejoinder by counsel for the respondent, former acting Solicitor General Neal Katyal, that any harm that may thereby result to national security could be mitigated through executive orders. 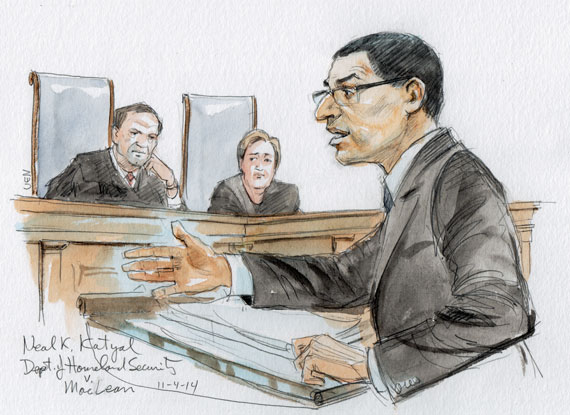 As we summarized in our argument preview, the case raises a fairly straightforward question of statutory interpretation, albeit one beset with significant policy baggage on both sides. The respondent, Robert J. MacLean, is a former U.S. air marshal who was fired in 2003 after disclosing to the media plans by the Transportation Security Administration (TSA) to radically scale back the deployment of air marshals due to budgetary concerns. MacLean challenged his termination under the WPA, claiming that he “reasonably believe[d]” that the leaked information disclosed “a substantial and specific danger to public health or safety.” The government responded that the WPA did not prevent MacLean’s termination because his disclosure was “specifically prohibited by law,” since it contravened the TSA regulations barring the unauthorized disclosure of “sensitive security information” (SSI) – including the deployment patterns of air marshals – which were specifically authorized by the Aviation and Transportation Security Act of 2001 (ATSA). The Federal Circuit sided with MacLean, holding that Congress’s authorization of the SSI non-disclosure regulations in the ATSA was not sufficiently express to satisfy the federal whistleblower statute’s requirement that the disclosure be “specifically prohibited by law.” The government then successfully sought certiorari from the Supreme Court.

Given the grant of certiorari notwithstanding the absence of a circuit split, one might have expected the Justices to be fairly sympathetic to the government’s position. But from the outset, Principal Deputy Solicitor General Ian Gershengorn, arguing on behalf of the government, faced a barrage of questions from nearly the entire bench. Although the Justices at first focused on how MacLean could even have known that the text message he received was SSI (so that its disclosure was prohibited by TSA regulations), the colloquy soon shifted to the crux of the government’s position – that, even if a regulation can’t satisfy the whistleblower statute’s exemption for disclosures “specifically prohibited by law,” the ATSA itself both can satisfy that proviso, and does, insofar as it mandates that TSA promulgate non-disclosure regulations. The Court, however, seemed unconvinced, with Justices Anthony Kennedy and Antonin Scalia (two votes the government almost certainly needs) pointing out that, even under the government’s position, MacLean’s disclosure wouldn’t have been prohibited by the statute until the TSA promulgated the regulations pursuant to which he was terminated. As Justice Scalia concluded, “So [the disclosure] is prohibited by regulations. Let’s not play games.” 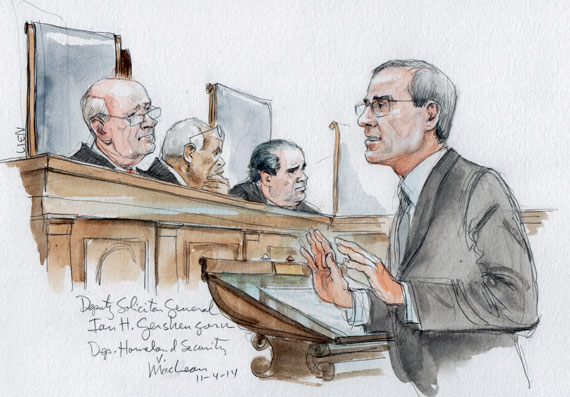 Undeterred, Gershengorn pivoted to the government’s two fallback arguments: Its reading of the whistleblower statute’s exemption is consistent with how the Court has read analogous language in other statutes; and the exemption’s reference to “law” should include some, but not all, regulations. Justices Elena Kagan and Scalia both appeared underwhelmed by that argument, with the latter suggesting, toward the end of Gershengorn’s opening argument, that such a distinction was too “subtle,” and that any argument that Congress intended such a distinction when it enacted the whistleblower statute is “hard to believe.”

Arguing on behalf of MacLean, Katyal opened by elaborating upon the principal argument made in his merits brief – that the ATSA does not prohibit any disclosures (it merely authorizes the TSA to do so), and, even if it did, it certainly doesn’t do so “specifically.” But perhaps the most important exchange in the hour-long argument came when Justice Samuel Alito asked whether, had MacLean instead disclosed the information to a foreign news agency to the clear detriment of national security, his actions would still be protected by the whistleblower statute. Katyal’s response was that, even if such a disclosure is not “specifically prohibited by law” within the meaning of the federal whistleblower statute (the necessary implication of MacLean’s position), it could involve information “specifically required by Executive order to be kept secret in the interest of national defense or the conduct of foreign affairs” under the second clause of Section 2302(b)(8)(A). Thus, Katyal argued, any concerns that the Federal Circuit’s decision might cause harm to national security could be addressed by appropriate executive orders prohibiting such disclosures – as opposed to (less accountable) agency regulations doing so.

That Katyal’s response shifted the Justices’ attention by the end of the argument to the implications of affirming the decision below (and siding with MacLean) is perhaps best demonstrated in the first question Gershengorn received on rebuttal – from Justice Scalia, who sought to clarify that the TSA regulations would still otherwise bar all disclosures of SSI other than those covered by the whistleblower statute. Of course, that question would be moot if the Justices ruled for the government.