The longer Monday’s argument in T-Mobile South LLC v. City of Roswell progressed, the more the dispute between the parties seemed to diminish. As previewed here, the case involves the City of Roswell’s denial of T-Mobile South’s application to construct a cell tower in a residential neighborhood, and the question for the Court is whether the denial complied with the “in writing” requirement of the Telecommunications Act of 1996. By the end of the argument, it appeared that the city agreed with much of T-Mobile South’s argument, puzzling several Justices and leaving unclear the proper path to decision. 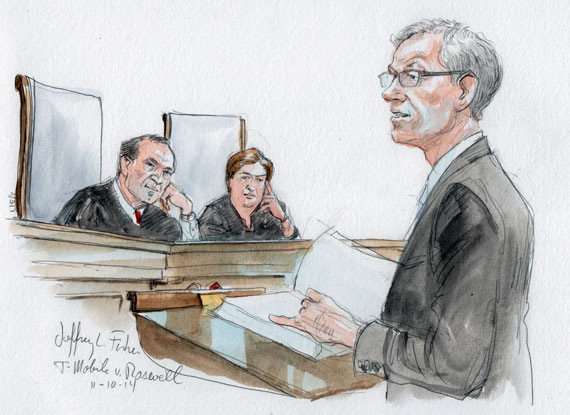 The relevant statutory provision provides that any “decision” denying an application to construct a cell tower “shall be in writing and supported by substantial evidence contained in a written record.” The question presented is whether a document satisfies the statutory requirement when it states that an application has been denied, but provides no reasons for the denial. In this case, the denial letter did not contain reasons, and the meeting minutes setting out the city council members’ reasoning were not made available until weeks after the letter was sent. The case calls for statutory interpretation, and also raises questions of how administrative law norms of reason-giving intersect with federalism concerns about unduly burdening local affairs.

Petitioner T-Mobile South, represented at the podium by Jeffrey Fisher, argued that the reasons for a state or local government’s denial of a cell tower application must appear in the same document as the denial itself. Justice Samuel Alito and Chief Justice John Roberts pressed Fisher a bit on the reach of his position – what if the reasons were provided a few days later? What if they were in a separate document that was known to the parties? Fisher steadfastly reiterated that the decision itself must state the reasons. Justices Ruth Bader Ginsburg and Elena Kagan pointed out weaknesses in Fisher’s textual argument, pointing out that the word “decision” itself does not necessarily imply reason-giving, but Fisher responded that his position was necessary to facilitate the Act’s provision for expedited judicial review. Justice Stephen Breyer expressed interest in the Eleventh Circuit’s position below – that reasons must be given, but can be found elsewhere in the record – and envisioned that on that basis, “[w]e probably even might be able to write an opinion in three paragraphs.” It was Justice Anthony Kennedy, however, who expressed the greatest concern about Fisher’s position, stating that treating a “local legislative body…like an administrative agency…raises very serious concern under Federalism.” Justice Antonin Scalia, in contrast, seemed to agree with Fisher, stating that he didn’t see any way to read the statute other than that “when [the city] denies, it has to have a reason for denying.” 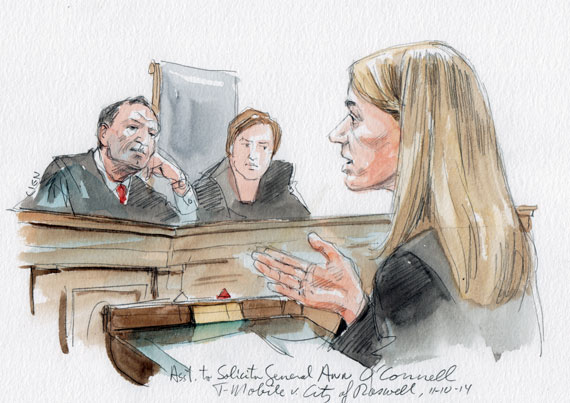 Ann O’Connell, an assistant to the Solicitor General, articulated the government’s compromise position: a local government must give reasons when it denies a cell tower application, but those reasons don’t need to be included in the same document as the written denial so long as they are available contemporaneously. Justice Ginsburg asked a clarifying question: why read the word “contemporaneous” into the statute, rather than just saying that the applicant’s time to seek judicial review does not start running until the applicant receives a document (here, the minutes) containing reasons? O’Connell responded that the latter approach raises practical problems, as applicants would not know if and when a reason-giving document would be forthcoming. (In this case, T-Mobile South had also hired a court reporter to prepare a transcript of the proceedings, but that fact did not feature prominently in the argument.) The Justices also asked O’Connell several questions about whether the members of the deciding body must agree on a single reason for the denial – a question not strictly necessary to the decision here, but which the government had reserved in a footnote in its brief. Justice Scalia called “absurd” the notion that a string of non-majority rationales could serve as an adequate explanation for an entity’s decision, stating that he “would never hold that.” Justice Kennedy returned to the federalism theme, asking if the federal government had ever imposed reason-giving requirements like those in SEC v. Chenery on a local legislative body. O’Connell started to say that she did not think so, but Justice Scalia quickly interjected that the city was acting in more of an adjudicative capacity. When Justices Scalia and Kagan pressed O’Connell to explain why the city should not give reasons in the denial itself “once we’re in the mode of requiring things,” O’Connell’s response was that even though such a requirement might not be hard to comply with, the Solicitor General does not think Congress went that far. 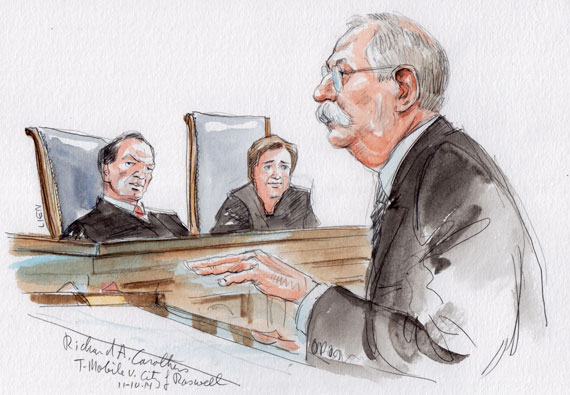 The city’s attorney, Richard Carothers, presented perhaps the most surprising argument. He readily conceded that, because the statute requires substantial evidence in a written record, it “necessitates reasons.” Carothers even seemed to agree with the Solicitor General that such reasons must be given contemporaneously, stating the city’s position “dovetails with the recommendation of the Solicitor General about contemporaneous minutes,” such that the applicant gets ample time to consider an appeal. His caveat – and the reason his concessions wouldn’t immediately cost him the case – was that the actual “decision” in this case was, on his telling, the minutes, not the initial denial letter. Under that view, he explained, the city provided reasons contemporaneously in the “decision.” He proposed that, going forward, the city would not send a denial letter until the minutes were available, so that the applicant would have the “collective record.” (It’s not clear that the city raised this argument below, though Carothers’ red light went on before he could finish answering that question.) Justices Sotomayor and Breyer noted that Carothers appeared to be endorsing the SG’s position, and Justice Kennedy expressed bewilderment at the “radically changed” position.

Perhaps inviting Carothers to stand up for the interests of state and local governments, Justice Alito asked about the burden T-Mobile South’s position would impose on municipalities. Justice Alito observed that while T-Mobile South was arguing for the city council to be “treated pretty much like a Federal administrative agency,” many municipalities are “very small,” “consist of lay people,” and may not have telecommunications attorneys available. Carothers replied that Justice Alito was “exactly correct” and agreed that “no court has ever held” local governments to the reason-giving standards of federal agencies. But Carothers didn’t seize the opportunity to make this the focus of his argument, noting that Roswell itself has “a relative degree of sophistication” and that city officials have attorneys with whom they consult. Justice Kagan, echoed by Justice Scalia, then proposed that the way to avoid burdening local governments is to establish a clear rule – “[a]nd that rule, honestly, would be Mr. Fisher’s rule,” requiring local governments to “write a sentence or two saying why” they were denying the application.

Despite – or perhaps because of – the vanishingly narrow disagreement between the parties, no consensus emerged as to how the Justices should rule. There may be some votes to establish a clear rule in T-Mobile South’s favor, requiring cities to state reasons in the same documents that convey the denial. Another possibility, articulated by Justice Breyer, is to affirm the Eleventh Circuit’s position that reasons must be given, but can be elsewhere in the record rather than in the denial itself. The questions would then be whether the reasons must be contemporaneous, and whether the minutes containing the reasons constitute the “decision,” as the city proposed at oral argument. Further complicating the situation, Justice Kennedy, and perhaps Justice Alito and others, are resistant to Roswell’s apparent concession that the federal government can hold local governments to the standard federal agencies must meet for reason-giving. Time will tell if T-Mobile South emerges as a significant exposition of the intersection of administrative law and federalism, or a three-paragraph decision that saves the broadest questions for another day.