Treating modern cellphones as gaping windows into nearly all aspects of the user’s life and private conduct, the Supreme Court on Wednesday unanimously ordered police to get a search warrant before examining the contents of any such device they take from a person they have arrested.  Seeing an individual with a cellphone is such a common thing today, Chief Justice John G. Roberts, Jr., wrote, “the proverbial visitor from Mars might conclude they were an important feature of human anatomy.” 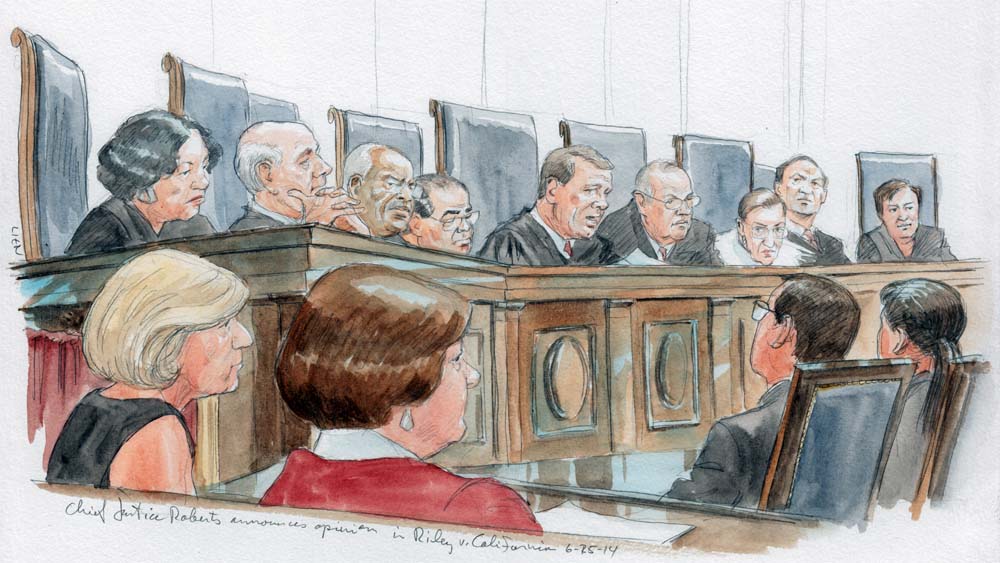 The Court rejected every argument made to it by prosecutors and police that officers should be free to inspect the contents of any cellphone taken from an arrestee.  It left open just one option for such searches without a court order:  if police are facing a dire emergency, such as trying to locate a missing child or heading off a terrorist plot.  But even then, it ruled, those “exigent” exceptions to the requirement for a search warrant would have to satisfy a judge after the fact.

The ruling was such a sweeping embrace of digital privacy that it even reached remotely stored private information that can be reached by a hand-held device — as in the modern-day data storage “cloud.”  And it implied that the tracking data that a cellphone may contain about the places that an individual visited also is entitled to the same shield of privacy.

The Court’s ruling drew some suggestions by Justice Samuel A. Alito, Jr., to narrow its scope, but it did not accept those.  The result was the broadest constitutional ruling on privacy in the face of modern technology since the Court’s ruling two Terms ago limiting police use of satellite-linked GPS tracking of a suspect’s movements by car.

On a personal level, the decision wiped out the convictions of a San Diego, California, man and a man from Boston, because evidence obtained from their cellphones was used to help gather evidence against them and helped lead to their convictions.

In purely technical constitutional terms, the ruling put strict new technology-based limits on a century-old doctrine on police authority to search:  the idea that, once police had arrested an individual, they could search items that person had brought along, in person or within reach in a car.  Such a “search incident to arrest” exception to the Fourth Amendment warrant requirement had been a feature of criminal law since it was first mentioned by the Court in 1914.

The Court did not cast aside any of its prior rulings allowing police to make such searches; it simply declared that they do not apply to cellphones, because of the nature of those digital devices.  “Today,” the Chief Justice wrote, “it is no exaggeration to say that many of the more than ninety percent of American adults who own a cell phone keep on their person a digital record of nearly every aspect of their lives — from the mundane to the intimate.”

An officer’s search of digital contents on such a device, the Chief Justice said, has the potential to ransack a person’s private life even more extensively than if police without a warrant went to that individual’s house and searched every corner of it from top to bottom, front to back.   Cell phones, the opinion said, contain more than even a house can.

While the type of technology incorporated into a cell phone was the rationale behind the entire ruling, its constitutional foundation was the Founding generation’s fear of the general search that British soldiers felt free to carry out against the American colonists — by the hated “writs of assistance.”

Chief Justice Roberts quoted Founder John Adams as remarking that the colonists’ resentment of writs of assistance brought “the child Independence” into being, leading to 1776 and the creation of a new nation.

Eight of the nine Justices signed onto the main opinion, without reservation.  Justice Alito’s separate opinion, speaking only for himself, would have preferred to have the opinion expand the “search incident to arrest” doctrine to allow police without a warrant to actually search for evidence of crime as part of an arrest, and he would have preferred to leave it to Congress and state legislatures to decide, by specific legislation, when police might be allowed to conduct searches of the contents of cell phones.