After the December oral argument in Lozano v. Alvarez, I reported that the Justices seemed to be dissatisfied with both of their options in the international child abduction case.  On the one hand, they could agree with Diana Montoya Alvarez, the mother in the case, that the Hague Convention on the Civil Aspects of International Child Abduction only gave Manuel Lozano, the child’s father, one year to file a lawsuit in the United States seeking his daughter’s automatic return to the United Kingdom – even if he couldn’t find her before that one-year period expired.  But a holding that the one-year period could not be equitably tolled to account for the abducting parent’s bad behavior, some Justices fretted at oral argument, would give parents an incentive to hide their children until the one-year period had passed, at which point a court considering the case could then consider whether the child was settled in her new environment. 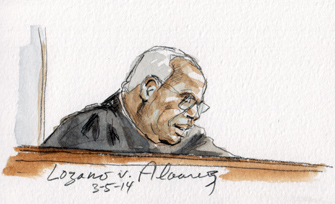 On the other hand, some Justices seemed concerned at oral argument that, if they agreed with Lozano that the one-year period could be equitably tolled, it could result in the child being wrenched yet again from her environment, without considering whether she had become settled there – effectively punishing her for her parent’s wrongdoing.

But even if the Justices didn’t like either of their options, they had to choose one.  And today they did, agreeing unanimously with Alvarez (and affirming the decision of the Second Circuit) that the one-year period during which the Convention provides a near-automatic return remedy cannot be equitably tolled.

Writing for the Court, Justice Clarence Thomas began by noting that, under U.S. law, courts presume that a statute of limitations can be equitably tolled when it is consistent with the statute.  But there are two problems in trying to apply that presumption to the Hague Convention.  First, of course, this case involves a treaty – for which there is no such general presumption – rather than a federal law.  And courts in other countries have held that the Convention’s one-year period cannot be equitably tolled.  The second, and perhaps more fundamental, problem is that the one-year period is not actually a “statute of limitations” in the true sense of the term, because the remedy provided by the Convention – the child’s return – is still available after the one-year period passes; it just isn’t automatic anymore.

Interpreting the treaty to preclude equitable tolling, the Court continued, is also more consistent with its text, which makes no mention of the possibility that the one-year period could be extended.  It might be natural to expect that some, if not many, parents who feel strongly enough to abduct their children might also try to conceal their whereabouts:  if the drafters of the Convention has wanted the one-year period to start when the left-behind parent actually discovered where the child was, the Court emphasized, they could have easily done so.

The Court ultimately rejected the strongest argument that Lozano had going for him:  that interpreting the one-year period as being subject to equitable tolling would be consistent with the purpose of the Convention because it will deter abductions.  Put another way, if a parent can ward off the automatic return remedy by concealing the child’s whereabouts long enough, the argument goes, then that parent will also be more likely to abduct the child in the first place.  While acknowledging that the Convention “reflects a design to discourage child abduction,” the Court cautioned that it “does not pursue that goal at any cost”; instead, as the Convention makes clear, in some circumstances courts can decline to order the child’s return.  The Court also questioned the premise underlying this argument, noting that even if an abducting parent successfully conceals the child, the effort and steps required to do so – for example, moving frequently or failing to enroll the child in school to evade discovery — can in fact prevent the child from becoming “settled.”

Justice Alito wrote a concurring opinion, which was joined by Justices Breyer and Sotomayor.  Although he indicated that he agreed “fully” with the Court’s reasoning, he nevertheless wrote separately to make clear that, even if the one-year period cannot be equitably tolled and the child is settled in his new home, courts can still consider other factors – including the abducting parent’s efforts to hide the child – and may ultimately opt to order the child’s return to his home country.