Opinion recap: Much more than raisins?

Giving industries that are regulated by the federal government a potentially broad opportunity to blunt enforcement orders, the Supreme Court ruled unanimously on Monday that farmers are allowed to claim in regular federal courts that they have been wrongly fined for violating an order on the marketing of their crops.   The ruling, while coming in the context of government regulation of farming, may have a considerably broader impact.

In essence, the Court’s ruling in a raisin growers’ case — Horne v. Department of Agriculture (docket 12-123) — appeared to mean that regulated entities cannot be compelled to pay regulatory fines before they may contest their constitutionality, under the Fifth Amendment’s protection against uncompensated government seizure of private property (the Takings Clause). 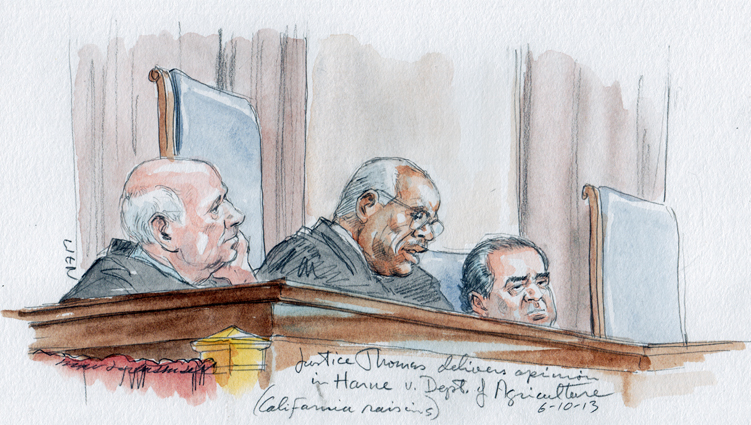 Justice Clarence Thomas’s opinion for the Court did not declare a final victory for the California raisin-producing family involved in the case, but it did give them a chance to bring a fundamental challenge to the government’s authority to fine them for failing to put aside a part of their annual processing of raisins in order to help boost the price of raisins generally.

If the decision were understood as confined to the agricultural field, its potential still appeared to be quite significant.  If the government has less authority to impose monetary fines and penalties for failing to obey its regulatory mandates, that will diminish its authority to issue those mandates in the first place.   The government has been closely regulating the selling of farm crops since the Great Depression, and continues to enforce a wide array of marketing mandates for crops, ranging from nuts to honey made by bees.  Typically, farmers get paid for keeping some of their harvest off the market, so that the price of the share going to market is inflated.

When this case, involving a California couple — who once complained to the Agriculture Department that its raisin-marketing controls were un-American and smacked of “a communist state” — returns to lower courts, they will be able to challenge without first paying it $483,843.53 in civil penalties for failing to set aside enough of two years of raisins they had processed for themselves and for other growers.

Although at one point in this case, the couple was arguing that the crop set-aside requirement itself was an unconstitutional “taking” of the raisins kept off the market, the Court treated their present claim as being that the command that they pay a considerable sum was the “taking” that was unjustified under the Constitution’s Fifth Amendment.   Lower courts will have to sort out what kind of “taking” the Horne family is actually asserting at this stage of the case.

Reading between the lines of the Court’s opinion, it would seem to be a signal that a wide array of businesses that live under government regulatory regimes will be able to bring constitutional “takings” claims in response to assessment of fines or civil penalties for disobeying those regimes.

A federal law known as “the Tucker Act” generally requires an entity which claims that the government has seized private property without paying compensation for it to bring that claim before a specialized tribunal, the Court of Federal Claims.  But the Court’s new ruling said that the Act does not apply when a farmer who has been found to have violated an agricultural marketing order, and has been fined, seeks to defend against the penalty by arguing that it was a “taking.”

Agricultural marketing orders are enforced within the Department of Agriculture itself, and can result in an order to pay a substantial amount, as happened with the Horne family.  But a farmer faced with such an order can now go to a regular federal district court with a “takings” claim, and have that claim judged before payment is actually due.   They won’t have to pay up, and then go in a separate plea to the the Court of Federal Claims.

The ruling thus was a potentially major setback for the Department of Agriculture in particular, especially if the Hornes win their “takings” claim when the case is completed in lower courts.  Its broader impact, beyond the agricultural marketing field, will depend upon how lower courts interpret the language of the Court’s opinion in different factual settings.