Anytime a public college or other governmental agency plans to use race to help shape policy, it may get the benefit of a court’s doubts in the first of a two-step analysis, but such plans may well fail in the second step.   That appears to be the new shape of “affirmative action” after the Supreme Court on Monday issued its much-awaited and long-delayed ruling on the use of race in selecting the first-year classes at the University of Texas in Austin.

In Fisher v. University of Texas (docket 11-345), the Court did not overrule its decade-old decision on college admissions, but its continuing embrace of that precedent was hardly enthusiastic.  More importantly, that decision — in Grutter v. Bollinger — has been largely supplanted by Monday’s ruling. 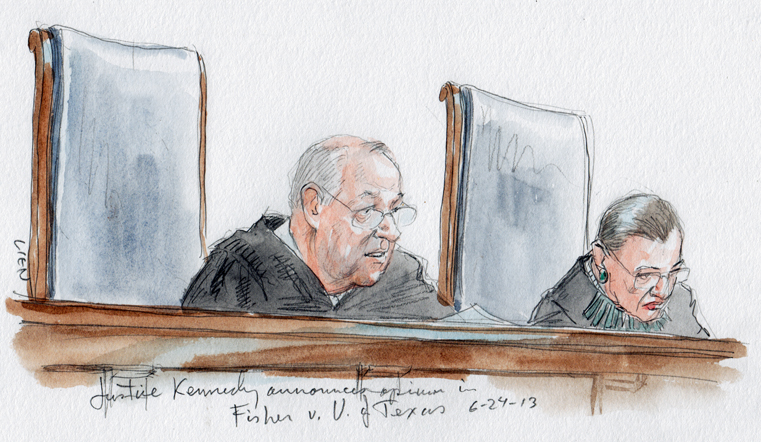 While the ruling was confined to the use of race in admissions to state- or local-government-operated colleges, it also has implications for the use of race in government job recruitment and public contract placement.   And the ruling will put a searching new spotlight on a case that the Court has already granted for review at its next Term: the constitutionality of a plan approved by state voters to forbid any use of race in public college admissions and, by implication, in state hiring and contracting.

Justice Anthony M. Kennedy’s opinion for seven Justices (Justice Ruth Bader Ginsburg dissented and Justice Elena Kagan did not participate) ordered the Fifth Circuit Court to take a new, and seemingly more demanding, look at an admissions formula adopted to be a close match of one that the Supreme Court had actually upheld in 2003 in the Grutter decision, involving the University of Michigan Law School.  The university thought it was following the guidance of that ruling, and the Fifth Circuit agreed that it had.

The Fifth Circuit, Kennedy wrote, did not even apply the constitutional standard laid out in the Grutter ruling, and went seriously awry in giving too much emphasis to the University of Texas’s “good faith” in adopting its own version of a Grutter plan.

Here is the explicit order the Justices sent to the Fifth Circuit for what it must now do: Do a two-step analysis.  In the first step, it is fine to rely upon the university’s good faith belief that there is an educational benefit in using race as one — but definitely not the only one — factor in choosing the students it will admit.  But, then, apply a second step, in which the university gets no benefit for a good faith belief in the need for the specific implementing steps it wants to take to actually achieve a form of “racial diversity.”

In this second step, the university has to prove to a court that it has first tried some other methods of encouraging minority students to enroll that do not give any consideration, whatsoever, to race.   If those other methods are “workable,” that’s probably the end of the inquiry: race cannot then be used at all.

Such alternatives do not have to promise to work as well as a racial factor might in increasing minority enrollment; it is sufficient if they would promote that goal “about as well,” according to the opinion.   Although a university does not have a legal duty to have canvassed “every conceivable” non-race alternative, it must go through such a review process with “care,” and it gets no deference for what it ultimately concludes, the Court said.

If the university then reaches the point that it has shown that it will be “necessary” to take some account of race, it must then satisfy a court that “its admissions program is narrowly tailored to obtain the educational benefits of [racial] diversity,” according to the Kennedy analysis.

Here is the way the opinion recited that ultimate test: “A university must make a showing that its plan is narrowly tailored to achieve the only interest that this Court has approved in this context: the benefits of a student body diversity that encompasses a broad array of qualifications and characteristics of which racial or ethnic origin is but a single though important element.”

Whether a university program that takes any account of race can run this legal course and survive, whether at the University of Texas or elsewhere, will depend upon cases that are now likely to unfold across the country.   There is a strong new incentive for opponents of “affirmative action” in college admissions to test virtually every such program; indeed, in some ways, the tone of the opinion would seem to invite such further testing.

While many have wondered whether the Court might use this case to actually overrule its decision in Grutter, and while some will speculate that the time it took for the Court to reach this decision (more than eight months) might suggest that at some point it was thinking about doing just that, the final opinion left that precedent on the books.

Justice Kennedy spoke of Grutter‘s continuation as a precedent in two places.   First, he mentioned it along with other “affirmative action” precedents and commented: “We take those cases as given for purposes of deciding this case.”  Second, he mentioned what Grutter had concluded, and then said that “the parties do not challenge, and the Court therefore does not consider, the correctness of that determination.”

In dissent, Justice Ginsburg wrote that “the Court rightly declines to cast off the equal protection framework settled in Grutter.”  But that might have been something of an exaggeration of what the Kennedy opinion actually had said on the point.   Perhaps her statement was meant, at least in part, as a response to a flat statement by Justice Clarence Thomas that he would overrule that decision, and a separate statement by Justice Antonin Scalia that the challenger to the University of Texas program had not asked for an overruling of that decision.  Both of those members of the Court wound up endorsing the Kennedy opinion in full.

Justice Scalia’s separate opinion was unusually brief for him in a major case, but Justice Thomas’s concurrence was a lengthy essay on the history of racial segregation, and came very close to accusing modern-day proponents of “affirmative action” of being the new segregationists.   Thomas went so far as to say that, if the Court had actually applied a strict scrutiny analysis to the Texas program, “it would require Texas either to close the university or to stop discriminating against applicants based on their race.”

In dissent, Justice Ginsburg’s main complaint was that the Fifth Circuit Court had already conducted the analysis that the Court was telling it to do over again.  She also made the secondary point that she strongly favors the use of race when that is a “benign” method of making up for a long history of racial discrimination in America.

After this ruling, the Court’s attention on race as a constitutional matter will turn, in the session that starts next October, to another public college “affirmative action” case, already granted.   The case of Schuette v. Coalition to Defend Affirmative Action (docket 12-682) is a test of the constitutionality of a voter-approved ballot measure that ordered the state government to stop using race as even a partial factor in choosing entering classes at public colleges in the state.

That measure also involved a ban on using race in state employment and in awarding state contracts, but the measure was struck down by the Sixth Circuit Court only as it applied to college admissions.  While the constitutional issue in that case is different from the one the Court decided on Monday, the skepticism of the Court about using race at all — newly on display in the Texas case — may be a hint that the Michigan ban has at least a chance of surviving the Court’s review.

(Note to readers: Elsewhere on the blog, Amy Howe has a “Plain English” description of Monday’s decision.)

Disclosure: The law firm of Goldstein & Russell, P.C., whose attorneys work for or contribute to this blog in various capacities, was among the counsel on an amicus  brief in support of the University in this case. However, the author of this post is not affiliated with the firm.