Today the Court finally issued its decision in Fisher v. University of Texas at Austin, the challenge to that school’s use of race in its undergraduate admissions process.  Since the Court announced last year that it would review the case, the university and supporters of affirmative action had feared the worst:  that the Court would strike down not only the university’s policy, but affirmative action more generally.  This morning the university learned that its admissions policy will at least live to fight another day, but it will face a tough test when the case goes back to the lower courts for further proceedings.  Let’s take a look in Plain English. 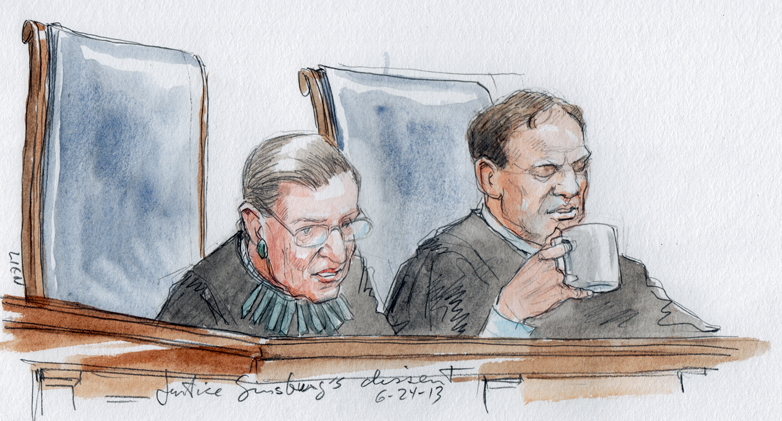 Justice Ginsburg reads from her dissent in Fisher v. U. of Texas (Art Lien)

As I explained in an earlier post, the case was filed by Abigail Fisher, a young woman from Texas who applied to the university but was rejected.  Fisher, who is white, then filed a lawsuit, arguing that she had been a victim of racial discrimination because minority students with less impressive credentials than hers had been admitted.  The university prevailed in the lower courts, but found a skeptical audience among the conservative Justices at oral argument at the Supreme Court.  Although Fisher and her lawyers made clear that they were not asking the Court to overrule its 2003 decision in Grutter v. Bollinger, ruling that the University of Michigan Law School could consider race in its admissions process as part of its efforts to achieve a diverse student body, the Court nonetheless seemed ready to put real restrictions on when and how universities can consider race.

Today a broad majority of the Court reinforced that affirmative action must be strictly reviewed, but it did not outlaw those programs.  In an opinion that required only thirteen pages, the Court explained that a university’s use of race must meet a test known as “strict scrutiny.”  Under this test, a university’s use of affirmative action will be constitutional only if it is “narrowly tailored.”  The Court in Fisher took pains to make clear exactly what this means:  courts can no longer simply rubber-stamp a university’s determination that it needs to use affirmative action to have a diverse student body.  Instead, courts themselves will need to confirm that the use of race is “necessary” – that is, that there is no other realistic alternative that does not use race that would also create a diverse student body.  Because the lower court had not done so, the Court sent the case back for it to determine whether the university could make this showing.

Justice Antonin Scalia joined the Court’s opinion, but he also wrote a separate, one-paragraph concurring opinion in which he made clear that, if Fisher and her lawyers had asked the Court to do so, he would have voted to overrule the 2003 decision in Grutter and eliminate the use of affirmative action altogether.  Justice Clarence Thomas – who in his autobiography blamed affirmative action for his problems finding a job after he graduated from Yale Law School in the 1970s – shared that view, but he opted to discuss his reasoning at length, in a twenty-page concurring opinion in which he suggested (among other things) that “the arguments advanced by the University in defense of discrimination are the same as those advanced by the segregationists.”

Justice Ruth Bader Ginsburg was the lone dissenter, but she still managed to produce a few zingers of her own in her sparse four-page opinion.  Most notably, she pooh-poohed the idea that the two alternatives to affirmative action suggested by Fisher and her lawyers – the school’s Top Ten Percent Plan, which offers automatic admission to any Texas high school student in the top ten percent of her class, and the review of applications without regard to race – are in fact “race-blind.”  Because race was actually at the heart of the Top Ten Percent Plan, she suggests, and because universities will still consider race even if they need to do so covertly, “only an ostrich could regard the supposedly race neutral alternatives as race unconscious.”

How will the university’s policy fare in the lower courts?  Given the Top Ten Percent Plan’s success in achieving a diverse student body, the school could face an uphill battle in convincing the lower court that it needs to be able to consider race to fill the remaining slots.   And it may soon have lots of company in court, if today’s ruling leads to new lawsuits by spurned applicants at other schools.

Given how long it took the Court to decide this case (nearly nine months), the seven-to-one vote came as somewhat of a surprise.  Although it may be many years before we know for sure, it seems very possible that the end result was a compromise brokered to break a stalemate:  affirmative action survives at least in theory (which would gain the support of Justices Breyer and Sotomayor), but will be far more difficult to implement in practice (which would gain the support of the Court’s more conservative Justices).   But for now, and probably much to their relief, affirmative action is off the Justices’ plate – at least until fall, when they will hear oral arguments in a case challenging an amendment to the Michigan constitution that prohibits the use of affirmative action by public universities.  Stay tuned . . . we’ll be back to cover that one in Plain English too.

Disclosure: The law firm of Goldstein & Russell, P.C., whose attorneys work for or contribute to this blog in various capacities, was among the counsel on an amicus  brief in support of the University in this case. However, the author of this post is not involved in the case.