Court to rule on government prayer

Returning for the first time in three decades to the constitutionality of saying prayers at the opening of a government meeting, the Supreme Court on Monday took on a case involving Town Board sessions in the upstate New York community named Greece, a city of about 100,000 people.  For years, it followed the practice of having local clergy — mostly leaders of Christian congregations — recite prayers to start Town Board public meetings.

The case of Town of Greece v. Galloway (docket 12-696) was one of five newly granted cases, all of which will be heard and decided in the Term starting next October.   No current member of the Court was serving when the Court last ruled on government prayers in the case of Marsh v. Chambers, in 1983. 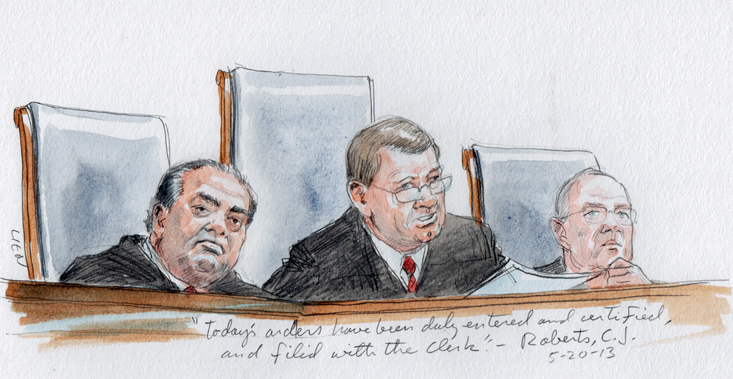 In the town of Greece, which is located in Monroe County just outside of Rochester, the opening prayer practice began in 1999 and continued at least through 2010, when lower courts ruled on its validity.  As the case reached the Supreme Court in a plea by the town, the practice had been ruled unconstitutional by the Second Circuit Court.

With two local residents challenging the prayer ritual, the Circuit Court concluded that — on the specific facts of this case alone — the recitation by clergy had the effect of aligning the town government officially with a particular faith — Christianity.   The Circuit Court stressed that it was not ruling that a local government could never open its meetings with prayers or a religious invocation, nor was it adopting a specific test that would allow prayer in theory but make it impossible in reality.

What it did rule, the Circuit Court said, was that “a legislative prayer practice that, however well-intentioned, conveys to a reasonable objective observer under the totality of the circumstances an official affiliation with a particular religion, violates the clear command of the [First Amendment’s] Establishment Clause.”

It emphasized that, in the situation in Greece, New York, the overall impression of the practice was that it was dominated by Christian clergy and specific expressions of Christian beliefs, and that the town officials took no steps to try to dispel that impression.

The Supreme Court’s agreement to review the decision might be interpreted as an indication that the Justices could be preparing to make a major pronouncement on religion in the public sphere, but it also might be understood as an intent to focus solely on the specific facts of the practice as it unfolded in this one community.

As the case develops, though, it almost certainly will draw wide interest from advocacy organizations and religious entities, if for no other reason than the Court has not examined the specific question in some thirty years.   Eighteen states had joined in urging the Court to grant review of the new case.

In the 1983 decision in Marsh v. Chambers, the Supreme Court upheld an opening prayer tradition at the Nebraska state legislature.  It did so, however, by relying solely upon the tradition of legislative opening prayers that Congress had followed since the Founding era.  In asking the Supreme Court to return to the issue, the town of Greece argued that the lower courts have divided deeply over the constitutional standards to be applied to judge such prayer exercises.

Since 1983, the Court has decided only two cases involving prayer as an issue in church-state relations, and both of those cases found invalid prayers that appeared to be sponsored by public school officials — at graduation ceremonies in a 1992 decision, and at a school football game in 2000.

While the Court granted the new case from the town of Greece after its second examination of the town’s petition, the Court took no action once again — after considering it a seventh time — on another case involving religion in the public sphere.   At issue in the case of Elmbrook School District v. Doe (12-755) is the constitutionality of holding a high school graduation ceremony in a church.   There has been no explanation of what the Court is doing with that case.

Here, in brief summary, are the other issues the Court added to its docket for decisions at its next Term:

** Frequent flyers: The Court agreed to decide whether airline passengers who are removed from a “frequent flyer” entitlement list have a right under state law to sue the airline for alleged violation of a promise that they could continue to enjoy the benefits.   The case of Northwest, Inc., v. Ginsberg (12-462) tests whether such legal claims are preempted by federal law governing regulation of commercial air service.

** Whistleblowers: In a case growing out of the federal Sarbanes-Oxley Act’s safeguards for whistleblowers who attempt to expose fraud in accounting of investment securities, the Court will be deciding whether that law provides protection against retaliation for the employees of companies who work under contract for the mutual funds that are regulated by the Act.  The Court had asked the U.S. Solicitor General for the federal government’s views on the case, and the SG recommended that the Court bypass the case.  The case, however, was granted.  It is Lawson v. FMR LLC (12-3).

** Police searches: The Court agreed to spell out further whether police may enter a home, without a warrant, to make a search, when the home is occupied by two individuals but consent to search has been given only by one of them.  A Los Angeles man in the case urged the Court to hear it, to clarify whether a co-occupant of a home must be on hand to object to a police search, when the other occupant has agreed to let the officers enter.  The case of Fernandez v. California (12-7822) seeks clarification of the Court’s 2006 decision in Georgia v. Randolph.

** Patent rights: In a dispute over the rights of owners of patents on a medical device for restoring faltering heart function, the Court will be sorting out who has the burden of proof when the holder of a license to such a patent is accused of infringing on the owner’s exclusive rights.  The case is Medtronic, Inc., v. Boston Scientific Corp. (12-1128).

In another action Monday, the Court — without noted dissent — summarily upheld a lower federal court decision that refused to undo the 2011 elections for the Mississippi state legislature, in a challenge by the Mississippi Chapter of the NAACP.   The Chapter has been trying to force new elections because it contends that the existing maps used in the 2011 elections were badly out of date, under the population numbers of the 2010 Census.  The legislature has drawn up new districts, but those will not be put into use until the 2015 elections.  The failure of the NAACP Chapter to get the Court to review its complaint was the second loss in the Court; the Justices similarly ruled against its plea in a summary decision in 2011.   The new case was Mississippi NAACP v. Bryant (12-1019).   Simultaneously, the Court summarily upheld the lower court’s refusal to allow a state legislative apportionment committee to intervene in the case (docket 12-1132).

Among more significant cases denied review on Monday were a constitutional challenge to Florida’s capital punishment scheme (Evans v. Crews, 12-1134), and an attempt by the state of Texas to challenge the long-standing doctrine that the federal government may sue a state or one of its agencies to enforce a federal law, even when the federal lawsuit is designed to benefit private individuals (Texas v. Solis, 12-726).