Relying on the idea that the United States is not the moral custodian of the world, a splintered Supreme Court ruled on Wednesday that American courts should rarely — if ever — decide claims that foreigners have committed atrocities against foreigners in foreign lands.   The Court’s long-awaited decision in Kiobel v. Royal Dutch Petroleum (10-1491) might have left the federal courthouse door ajar, but only slightly so, for such a case in the future.

There were no outright dissents, but the actual meaning of the decision had to be drawn out of three opinions — the main one, by Chief Justice John G. Roberts, Jr., and separate opinions by Justices Anthony M. Kennedy and Samuel A. Alito, Jr.   But even a fourth opinion by Justice Stephen G. Breyer, refusing to join any part of the others’ opinions, might suggest ways in which a future case could yet be pursued. 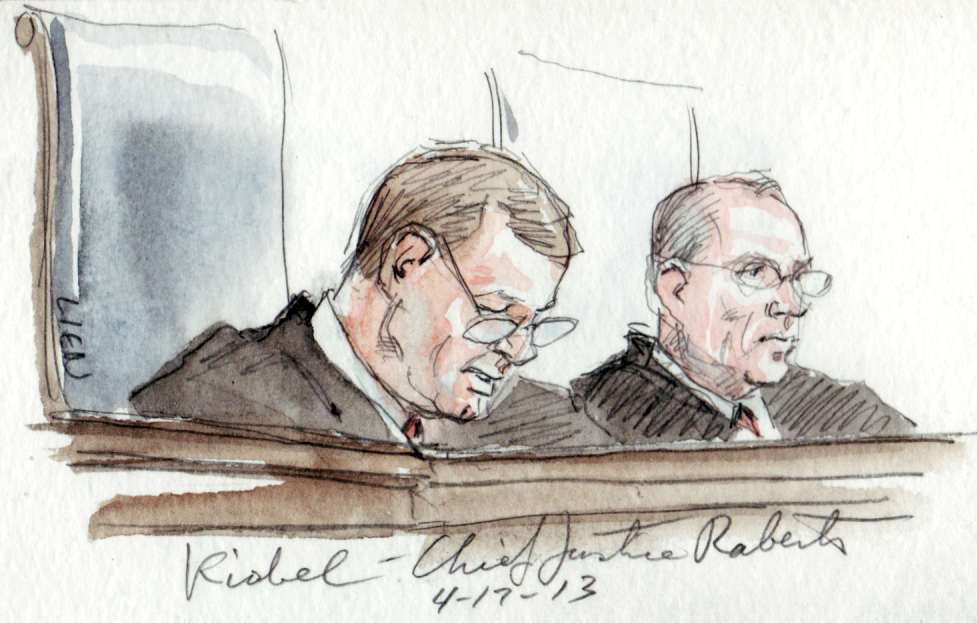 For all of its importance, and that was beyond question, this was not a decision based on the Constitution.  It was, instead, an interpretation of the power of U.S. courts under a broadly worded federal law that originated all the way back in the first year of the American government: 1789.   It is the Alien Tort Statute, which was little used in human rights cases until the 1980s, but has been relied upon with rising frequency since then.

The law opens U.S. courts to “any civil action” filed by a foreign national and claiming wrongdoing that violated either international law or a U.S. treaty.  It does not spell out what kinds of wrongdoing can be challenged, or where they must have occurred.  It simply opens the courthouse door to such a claim.

In finally deciding a case that has been unfolding before the Court for nearly two full years, and was heard twice, five Justices declared that the judge-made concept that U.S. laws are presumed to apply only to the U.S. and its territory means in general that the ATS cannot be the basis for a lawsuit in which all of the conduct challenged occurred in a foreign country where there is a functioning, legitimate government.

That doctrine, spelled out most fully in the Chief Justice’s opinion, blocked the particular lawsuit at issue in the case: filed by twelve Nigerians, now living in the U.S., who claimed human rights violations by three Dutch or British oil companies that had allegedly enlisted the government of Nigeria to use its military to violently suppress resistance to oil exploration in the Ogoni region of the Niger Delta, between 1992 and 1995.

The Second Circuit Court had thrown out the lawsuit, but on the narrower basis that the ATS did not allow such lawsuits to be filed against corporations.  That was the issue the Supreme Court originally took on, but then the Justices changed the thrust of the case to decide whether the ATS had any application to actions that occurred beyond U.S. shores.

On Wednesday, the Court barred the case, but on the point that the ATS did not have “extraterritorial” application.  This lawsuit, the Chief Justice wrote, involved only “conduct occurring in the territory of a foreign sovereign” — here, Nigeria.

The Court explicitly avoided deciding whether any ATS case, under any circumstances, could be brought against a corporation, foreign or domestic.   If the decision did leave some narrow range of options for future ATS cases in a U.S. court, and such a case targeted a corporation, the issue of whether the law can be used against such targets would be revived.

The Roberts opinion justified the result on the basis of several arguments: to avoid conflicts with other nations, to avoid judicial interference with diplomacy, to protect U.S. citizens from similarly being haled into foreign courts, and to avoid trying to set up the United States as the “custos morum [moral custodian] of the whole world.”   That Latin quotation was borrowed from Justice Joseph Story, who made it in a court opinion in 1822.

While the whole tenor of the Roberts opinion was an argument against any ATS lawsuit based solely on atrocities on foreign soil, the final paragraph of the opinion seemed to leave an opening, however narrow.  It suggested that the presumption against applying the law outside the U.S. might possibly be overcome “where the claims touch and concern the territory of the United States.”  But, it stressed, that domestic impact would have to be of “sufficient force” to displace the presumption.

Justice Kennedy’s brief separate opinion, for himself only, said the Court had left open “a number of significant questions regarding the reach and interpretation” of the 1789 law.  As future cases arise, he wrote,”the presumption against extraterritorial application may require some further elaboration and explanation.”

Justice Alito, in a separate opinion joined only by Justice Thomas, argued that the Court should have gone further, and barred any ATS lawsuit unless it targeted “domestic conduct” that would definitely violate a norm of international law that had “acceptance among civilized nations.”  It was not exactly clear whether that would leave any option open, because there was no further clarification.

Justice Breyer’s separate opinion was joined by Justices Ruth Bader Ginsburg, Elena Kagan, and Sonia Sotomayor.   Those four Justices would not have used the extraterritorial bar at all.  Rather, they argued that the focus should be explicitly on just what Congress meant in passing ATS, and how that should be applied in a modern world in which atrocities and other human rights abuses that are “recognized by the community of nations as of universal concern.”

That opinion argued that ATS cases should be allowed where the wrongdoing “occurs on American soil” and the target of the lawsuit is “an American national”  (it did not say whether that had to be a human or a corporation), and then, in addition, a much broader potential claim — that is, where the target’s wrongdoing “substantially and adversely affects an important American national interest, and that includes a distinct interest in preventing the United States from becoming a safe harbor (free of civil as well as criminal liability) for a torturer or other common enemy of mankind.”

It seemed at least arguable that the Breyer approach might, in time, allow lawyers bringing a future ATS lawsuit to fit their claim into the opening — however narrow — that the Chief Justice’s opinion appeared to have left.

Disclosure: Goldstein & Russell, P.C., whose attorneys work for or contribute to this blog in various capacities,  represents Achmed et al. and the Center for Justice and Accountability as amici curiae in support of the petitioners. The author of this post operates independently from the law firm.