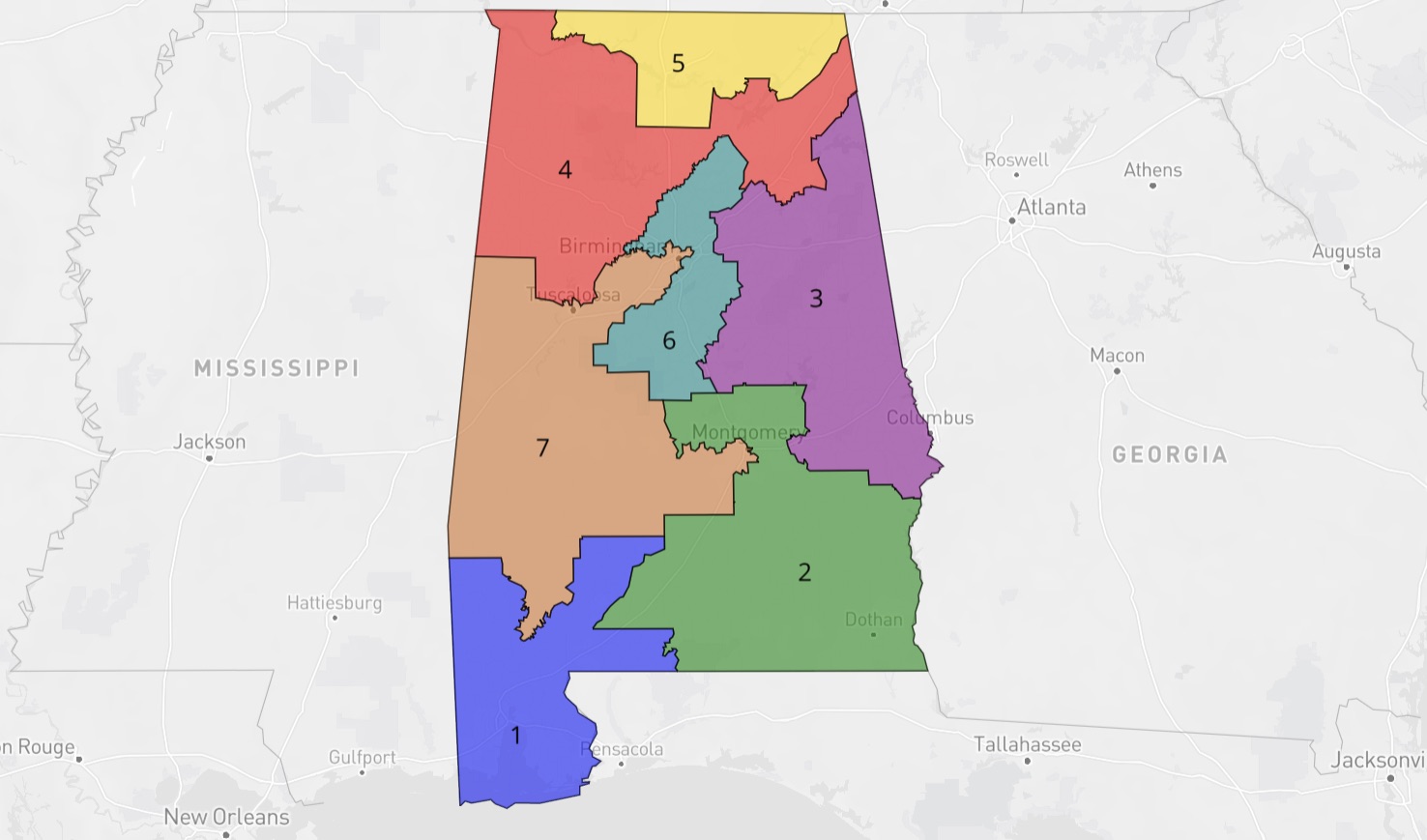 Alabama's congressional map. The only majority-Black district is the 7th District, which has a 55% Black voting-age population. (Source: davesredistricting.org)
Share

Section 2 of the Voting Rights Act bars election practices that result in a denial or abridgement of the right to vote based on race. On Tuesday, the Supreme Court will revisit how that provision, a landmark protection whose broad language is hotly contested, applies to redistricting plans that are challenged as weakening the collective voting power of Black people.

The case, Merrill v. Milligan, involves Alabama’s 2021 redistricting map for its seven seats in the U.S. House of Representatives. A three-judge court that included two judges appointed by President Donald Trump ruled that the state’s map likely violated Section 2. The state is asking the Supreme Court to overturn that decision, arguing that the lower court’s interpretation of Section 2 would itself require the state to discriminate based on race. But the challengers counter that if the justices accept the state’s argument, it could “decimate minority representation across the country.”

Alabama created the redistricting plan at the center of the case after the 2020 census. Roughly 27% of the state’s residents are Black, but only one of the seven districts in the plan is a majority-Black district.

A group of registered voters, along with the Alabama chapter of the NAACP and Greater Birmingham Ministries, a multifaith community organization, went to federal court to challenge the map. They argued that the state had illegally packed many Black voters into a single district in a part of Alabama known as the “Black Belt,” a mostly rural area running across the middle of the state that was named for its black soil but also has a large Black population. In that district, nearly 60% of registered voters are Black, but, they said, the state’s new plan dispersed Black voters in the rest of the Black Belt into several other districts, each of which was made up of fewer than 31% Black voters.

The effect of the map, according to the challengers, is to minimize the number of districts in which Black voters can elect their chosen candidates. The legislature could, and should, have created a second majority-Black district, the challengers contended, and the state’s failure to do so violated Section 2.

In January of this year, a three-judge district court (which Congress has designated to hear challenges to the constitutionality of redistricting plans) agreed that the state’s new congressional map likely violates the Voting Rights Act. It gave the state two weeks to draw a new map that includes two majority-Black districts.

The state filed an emergency appeal to the Supreme Court, asking the justices to freeze the lower court’s order. A divided Supreme Court in early February granted the state’s request, a move that effectively allowed Alabama to go ahead with its preferred map for the May 2022 primary elections and the November 2022 general elections. The justices also set the case for oral argument in the fall.

Justice Elena Kagan, in an opinion joined by Justices Stephen Breyer and Sonia Sotomayor, dissented from that ruling – which, she wrote, “forces black Alabamians to suffer what under” the Voting Rights Act “is clear vote dilution.”

Chief Justice John Roberts filed a separate dissent. The lower court, he wrote, properly applied current voting-rights law under the Supreme Court’s 1986 decision in Thornburg v. Gingles, the seminal case governing claims that redistricting plans illegally dilute minority votes. But Roberts also wrote that Gingles and subsequent decisions on vote-dilution claims “have engendered considerable disagreement and uncertainty.” So while Roberts disagreed with the majority’s decision to put the lower court’s order on hold, he agreed with the decision to hear oral argument in the dispute.

In its brief on the merits, the state stresses that Section 2 bars discrimination against voters based on race. But Section 2 does not, the state continues, impose “an affirmative obligation upon the States to ensure that wherever a majority-minority district can be drawn, at whatever sacrifice to race-neutral redistricting criteria, it must be drawn.” Indeed, the state writes, interpreting Section 2 to require the state to create a majority-Black district would violate the Constitution, because that approach would entail “racial targets” and “race-based sorting” in violation of the 14th and 15th Amendments.

The key question, according to Alabama, is whether the political process is “equally open” to all voters, regardless of race. Its map passes that test, the state insists, because it was drawn using race-neutral redistricting criteria, such as the desire to adhere as closely as possible to previous district lines. Plaintiffs challenging a redistricting plan, the state contends, cannot prevail unless they show that the plan can only be attributed to racial discrimination.

Plaintiffs must also show, the state continues, that they can create a new map with an additional majority-minority district without prioritizing race. The fact that the plaintiffs can draw a majority-minority district by prioritizing race, the state says, “reveals nothing about whether a State’s enacted map discriminates against them.” In this case, the state insists, “the only way” that the challengers could create a majority-Black district “was to intentionally sort Alabamians by skin color,” creating “two radically redrawn and sprawling districts.”

Calling Section 2 “one of the most effective prohibitions on discrimination in voting that Congress has ever enacted,” the challengers and the Biden administration urge the justices to allow the lower court’s ruling to stand. The state’s argument, they say, boils down to the idea that “race should play no role whatsoever” in the analysis of whether a redistricting plan violates the VRA. That position, they tell the court, would “rewrite” Section 2 and “overturn decades of settled precedent.”

Section 2, the Biden administration contends, plays a “limited but essential role”: It requires the consideration of race only when plaintiffs have shown that “pervasive racial politics would otherwise deny minority voters equal electoral opportunities.” That is the situation here, the challengers explain, because voting in Alabama is intensely polarized. As a realistic matter, they write, Black voters can only elect Black candidates if they make up a majority (or something very close thereto) in a district. Indeed, they note, no Black candidate has ever been elected to Congress in Alabama from a majority-white district.

The challengers and the Biden administration push back against the state’s suggestion that Section 2, as currently applied, improperly requires states to prioritize race above other race-neutral criteria in redistricting. The Supreme Court’s cases already counsel against prioritizing race in redistricting, they say; a state does not violate Section 2 just because it didn’t create as many majority-minority districts as possible. But if the justices are concerned that lower courts are not applying the proper test when dealing with cases like this, they add, “the answer would be to reinforce those limitations – not to jettison the standard.”