Lengthier opinions and shrinking cohesion: Indications for the future of the Supreme Court

The Dobbs majority opinion was the third-longest Supreme Court opinion since the beginning of the 1946-47 term, according to our analysis. Dobbs is also the only example of a case where a complete draft of the majority opinion was leaked prior to the publication of the final draft. The long lapse between Feb. 10 – when the leaked draft was marked as having been circulated among the justices – and the June 24 release of the final opinion serves as the first time the public has been given a glimpse into the court’s drafting process.

The process and the outcome in Dobbs reveal two burgeoning themes in the court’s work: fewer unanimous decisions and lengthier overall opinions. Both trends could further diminish perceptions of a collegial and productive court.

Politico’s release of an early draft of the opinion in Dobbs sent a whirlwind across the nation. The shock of such a dramatic breach of confidentiality from an institution known for its veil of secrecy was quickly replaced by the realization that the court was poised to overturn Roe v. Wade and Planned Parenthood v. Casey, as many had expected.

On June 24, the court made it official when it released the final, ideologically split decision. A comparison of the February draft with the June opinion shows that the final opinion is substantively quite similar to the draft. Alito’s core legal analysis remained largely the same, with lengthy passages from the draft reappearing verbatim in the final opinion.

Some language from the draft was omitted in the final opinion — mostly concerning legal citations. Alito also added some new language, the bulk of which responded to the dissent and concurrences. But notwithstanding these changes, the overwhelming bulk of the Dobbs majority opinion appears to have been already finalized by Feb. 10, a full four months prior to the opinion’s release.

Recent reports have drawn attention to the Roberts court’s low productivity, most notably pointing to diminishing caseloads and the long interlude between oral arguments and the release of opinions. This term’s average turnover period from argument to opinion was 122 days — the longest since at least 1946. At the same time, the number of argued cases this term, 63, is among the lowest in its history. 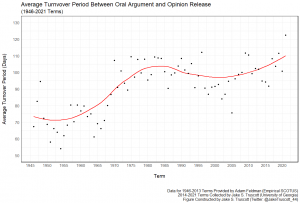 So, why the delay? The combination of procedures dictated by internal norms and the court’s preference to maintain confidentiality leaves scholars to construct inferences about the court’s practices based largely on anecdotal evidence, usually from former clerks, justices, or other insiders. In fact, many of the inferences concerning how the court actually operates behind the scenes are drawn from the archived notes of Justices Harry Blackmun and Lewis Powell. Both of those justices, however, served primarily in the 1970s and 1980s, so their relevance to modern practice may be limited. In effect, the leaked Dobbs draft represents the first indication that even the most notable and lengthy opinions are completed rather quickly, and the long interlude might be the result of responding to lengthy separate opinions or other behind-the-scenes maneuvering. It is perhaps unsurprising then that there is a notable correlation between the diminishing size of majority coalitions and a discernable increase in opinion length.

Why we should expect longer opinions and smaller majorities

The intuition likely stems from a simple premise: Decisions with smaller majorities are often indicative of ideological disagreement among the justices and consequently require more prose to substantiate the justices’ positions. When this is the case, majority opinions will spend more time reinforcing positions on the merits, especially on divisive political issues. Other recent examples of such issues from this term included New York State Rifle & Pistol Association v. Bruen (involving gun rights) and Kennedy v. Bremerton School District (involving prayer by public school employees), both of which generated lengthy opinions. Apart from time spent criticizing the majority opinion, lengthy dissents can be used to lay the groundwork for future case law – as we saw among the conservative justices’ dissents in every abortion-related case between Roe and Dobbs.

These observations are not a new phenomenon. Ideological conflicts have existed throughout the court’s history and became increasingly clear in the early 1900s. Long opinions are frequently found in more divisive cases. An emerging trend in recent years, however, is the shrinking volume of unanimous decisions in coordination with an apparent willingness of the court to grant review to generational political issues. Incorporating this term with the historical record, we can see how only two majority coalition sizes, 8-1 and 6-3, are both increasing and currently above their historical averages. The percentage of unanimous decisions in the 2021-22 term was also well below the 75-year average of 37.6%. 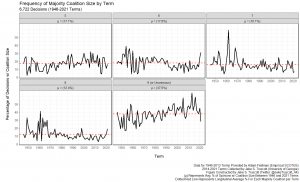 Recent 8-1 decisions are generally the result of solo dissents from specific justices (typically Justice Clarence Thomas or Sonia Sotomayor), while the growing volume of 6-3 decisions is simply a reflection of the court’s current ideological makeup. For the indefinite future, we believe the 6-3 split will supplant the 5-4 split as the common breakdown for the court’s most divisive cases.

As Justice William Brennan was fond of saying, the most important number in constitutional law is five: “With five votes … you can do anything.” He never said anything about six.