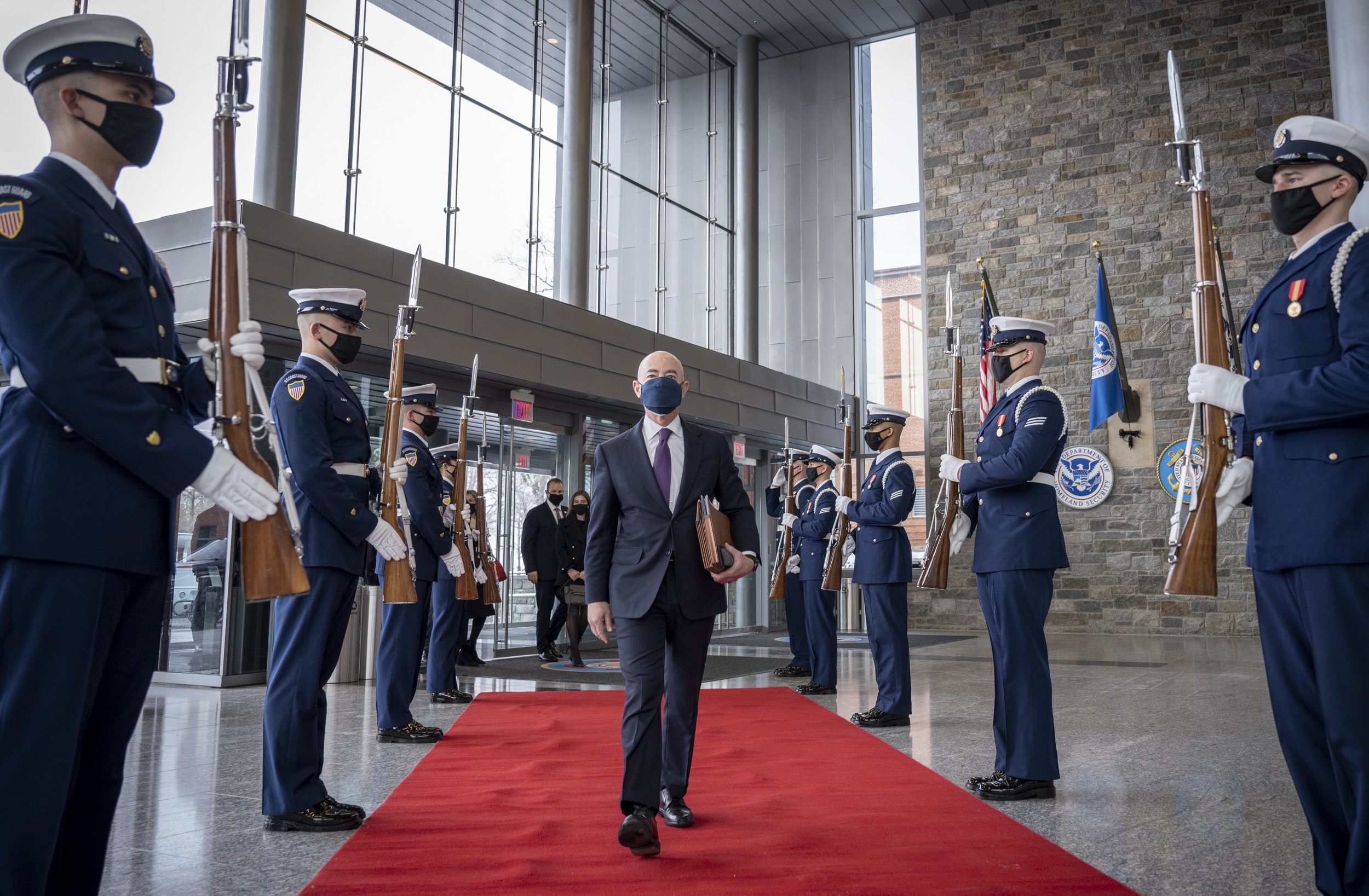 The Supreme Court will again weigh the executive branch’s authority to set immigration policy as some red states claim that the Biden administration’s enforcement decisions are too lax. The justices on Thursday agreed to take up a challenge by Texas and Louisiana to a new federal policy that prioritizes certain groups of unauthorized immigrants for arrest and deportation. The justices will hear the case in late November without waiting for a federal appeals court to weigh in.

The justices left in place a district-court ruling striking down the policy, which means that the Biden administration cannot implement it while it waits for the Supreme Court to hear argument and issue a decision.

In a 5-4 vote, the justices rejected the administration’s request to put the district court’s ruling on hold and allow the administration to implement the policy while litigation proceeds. Justices Sonia Sotomayor, Elena Kagan, Amy Coney Barrett, and Ketanji Brown Jackson indicated that they would have granted the request. It was the first recorded vote for Jackson, who was sworn in as the court’s newest justice on June 30 to succeed the now-retired Justice Stephen Breyer.

The policy at the center of the dispute is outlined in a September 2021 memorandum by Secretary of Homeland Security Alejandro Mayorkas on the federal government’s priorities for immigration enforcement. Explaining that there are over 11 million noncitizens currently in the United States who could be subject to deportation, but that the Department of Homeland Security does not have the resources to apprehend and deport all of them, the memorandum instructed immigration officials to prioritize the apprehension and deportation of three groups of noncitizens: suspected terrorists, people who have committed serious crimes, and those caught at the border.

Texas and Louisiana went to federal court in Texas to challenge the policy. U.S. District Judge Drew Tipton vacated the policy on June 10, and the U.S. Court of Appeals for the 5th Circuit rejected the Biden administration’s request to put Tipton’s ruling on hold while it appeals.

In a separate case, Arizona, Montana, and Ohio also challenged the policy in a federal district court in Ohio. The district court barred the Biden administration from relying on the memorandum, but the U.S. Court of Appeals for the 6th Circuit reversed that ruling, finding that the states were unlikely to succeed on the merits of their claim – a key factor for determining whether to grant temporary relief.

The Biden administration came to the Supreme Court on July 8, asking the justices to temporarily block Tipton’s ruling vacating the policy nationwide. In a filing by U.S. Solicitor General Elizabeth Prelogar, the Biden administration complained that Tipton’s decision had disrupted DHS’s operations – and in particular its “efforts to focus its limited resources on the noncitizens who post the gravest threat to national security, public safety, and the integrity of our Nation’s borders.”

Prelogar argued that the lawsuit should not be allowed to go forward at all because the states’ arguments that the enforcement decisions made under the policy may indirectly cost them more – because, for example, they might have to shoulder the costs of keeping noncitizens in prison or providing them with public benefits – do not establish a right to sue, “let alone justify the disruptive relief entered here.” The states’ theory, she complained, “would allow States to challenge virtually any federal policy by leveraging even a dollar’s worth of incidental, indirect effect on state expenditures into a nationwide vacatur or injunction.”

Tipton also lacked the power to issue his ruling, Prelogar contended. The Supreme Court’s recent decision in Garland v. Aleman Gonzalez made clear, Prelogar wrote, that a provision of federal immigration law does not allow district courts “to compel the Executive Branch to comply with their interpretation of the relevant statutory provisions.”

At the very least, Prelogar concluded, the justices should allow the administration to implement the new policy outside Texas and Louisiana. Or, she suggested, the Supreme Court could treat the administration’s filing as a petition for review and fast-track the case for oral argument in the fall.

Texas and Louisiana pushed back against the Biden administration’s arguments. The states stressed that they have a right to sue because they have suffered financial harm from the new policy – for example, because it results in non-citizens remaining in state prisons for longer than they otherwise would.

The states also rebuffed the administration’s contention that Tipton did not have jurisdiction to vacate the policy. The Biden administration waived its right to raise this argument because it didn’t raise it in the district court until after the final judgment, the states said. But in any event, they added, the relevant provision merely “limits a district court’s jurisdiction to enter an injunction.” In this case, Tipton only vacated the policy; he did not enter an injunction, which is a different form of relief.

Tipton’s decision to vacate the policy was the correct one, the states continued, because the policy conflicts with specific statutory instructions that Congress has given DHS in federal immigration law to detain noncitizens. Moreover, the states wrote, the policy is not valid because DHS failed to comply with the federal laws governing administrative agencies – for example, it did not provide notice of, and an opportunity to comment on, its new enforcement priorities, and it failed to properly consider “the high rate of abscondment and recidivism among criminal aliens and aliens with final orders of removal” in reaching its conclusions.

A group of 19 states with Republican attorneys general, led by Arizona, filed a “friend of the court” brief supporting Texas and Louisiana. Like Texas and Louisiana, they emphasized that the new policy “continues to impose significant costs on the States, including billions of dollars in new expenses relating to law enforcement, education, and healthcare programs.” But they also launched a broader attack on U.S. immigration policy generally, describing a “corrosive disrespect” by DHS for the rule of law and characterizing the U.S.-Mexico border as “an unmitigated disaster.” They portrayed the new policy as “the product of escalating lawlessness by DHS” and another chapter in “DHS’s serial refusals to consider the reliance interests of states.”

In a brief supporting the Biden administration, law professor Stephen Vladeck of the University of Texas Law School suggested that Texas, rather than DHS, has acted in bad faith, by using a “deliberate strategy of judge-shopping.” Vladeck documented the frequency with which the state has filed its lawsuits challenging the Biden administration’s policies in subdivisions of a federal district court where only one judge – almost always a judge appointed by a Republican president, and generally appointed by former President Donald Trump – hears cases. This case, Vladeck wrote, is consistent with that practice: Texas opted to file in a division over 100 miles away from Austin, the state’s capital, and nowhere near the U.S.-Mexico border, where there is only one judge: Tipton, a Trump appointee.

“Texas’s transparent judge-shopping tactics disserve the public interest,” Vladeck argued. “If litigants like Texas are regularly able to obtain nationwide injunctions from judges who they have literally hand-picked to hear their complaints, it should go without saying that public faith in the independence of the federal judiciary will be undermined.”

In a brief order on Thursday afternoon without explaining its reasoning, the court rejected the administration’s request to reinstate the policy. But the justices agreed with Prelogar’s suggestion that they take up the case now, without waiting for the 5th Circuit to decide the government’s appeal. The court set the case for argument in late November, and it directed the Biden administration and the states to address three questions: whether the states have a right to bring their lawsuit; whether the policy is consistent with federal immigration law and the federal law governing administrative agencies; and whether Tipton had the power to set aside the policy.

The decision to hear the case comes less than a month after the justices decided another high-profile dispute between Texas and the federal government over immigration policy. On June 30, in one of the final opinions of the 2021-22 term, the court ruled 5-4 in Biden v. Texas that the administration could terminate the controversial Trump-era “remain in Mexico” program for people seeking asylum at the southern border.