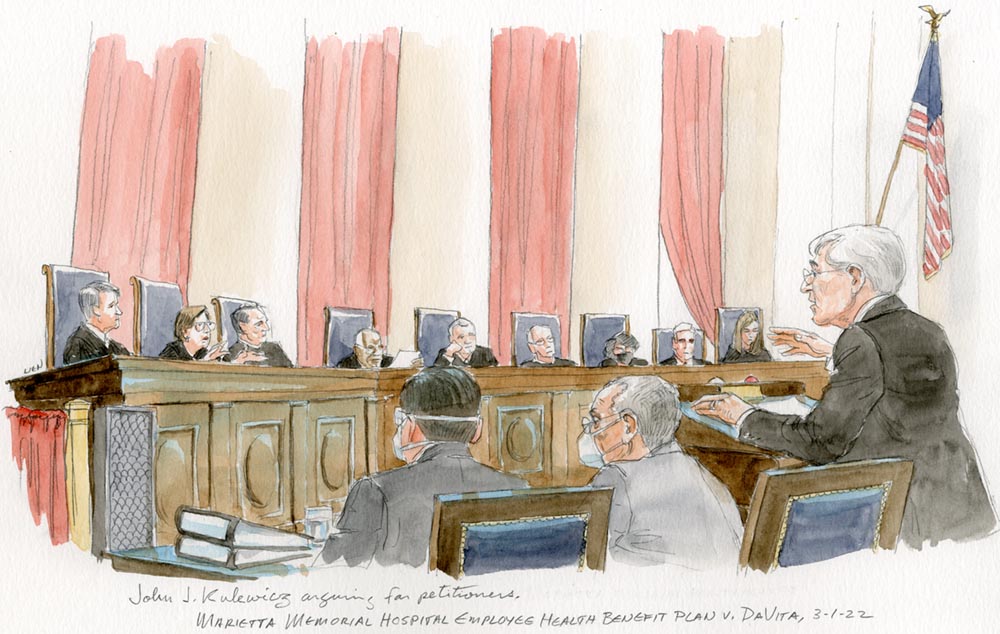 Tuesday’s argument in Marietta Memorial Hospital Employee Health Benefit Plan v. DaVita Inc. offered no surprises, as the justices grappled with the financial ramifications of applying a vaguely written statute to an insurer’s craftily designed arrangement for lowering the reimbursements it pays for outpatient dialysis.

Because outpatient dialysis is critical to the survival of patients with end-stage renal disease, a system that makes the treatment available at a cost that patients can afford is a matter of life and death to those patients. The statutory framework that addresses that problem puts the primary responsibility to pay for that treatment on secondary insurers for the first 30 months after diagnosis, with primary responsibility shifting at that point to Medicare. That arrangement gives secondary insurers a powerful incentive to “lowball” reimbursement for outpatient dialysis: If they offer low payments for that treatment, the patients naturally will respond by canceling their private insurance and moving on to Medicare. To prevent insurers from engaging in that sort of manipulation, Congress adopted a series of rules that prohibit the secondary insurers from discriminating against patients with end-stage renal disease.

The insurer in this case (Marietta) has responded by adopting low reimbursement rates for outpatient dialysis. Among other things, it has no in-network provider (so that patients have to pay up front for all care) and it reimburses based on a percentage of the Medicare rate, as opposed to the “reasonable” and “customary” costs of care, the standard it uses for all other treatments. Because those features of the plan apply to everybody that receives outpatient dialysis, whether or not they have end-stage renal disease, Marietta contends that they do not violate the statute by offering differentiated treatment to patients with that condition.

Several of the justices, especially Sonia Sotomayor and Elena Kagan, were harshly critical of Marietta’s plan. Sotomayor, for example, challenged John Kulewicz (counsel for Marietta), contending that Marietta is “going against the Medicare purpose of ensuring that the public fisc is not dipped in until necessary,” because Marietta’s plan “is forcing those non-Medicare people to jump into Medicare as soon as they can.” For Sotomayor, it seemed “on the face of the statute not legal” that the plan pays for outpatient dialysis at a fraction of the Medicare rate instead of applying the “reasonable and necessary costs” standard it applies for all other care.

After some waffling, Kulewicz took the view that such a program would be permissible, because it would be differentiating based on treatment rather than the condition itself. Kagan responded: “I take that answer to be something along the lines of … we have found a perfect end run around the statute, but, you know, sometimes statutes have perfect end runs and, if the statute doesn’t proscribe it, too bad.” She went on to comment, rhetorically: “If you say you can’t differentiate between Orthodox Jews and everybody else, and then you have a tax on yarmulkes and kosher food, are you doing that differentiation or not?”

Chief Justice John Roberts intervened at that point, noting that he “want[ed] to make sure I understand your answer because, obviously, Justice Kagan’s line of questioning is very important.” The problem, Roberts noted, is that “the practical result” of Kulewicz’s position, “obviously, is not one that I think the people writing the statute would want to sanction.”

The argument was not entirely one-sided, as several of the justices (including Samuel Alito and Neil Gorsuch) challenged Seth Waxman (representing DaVita, one of the nation’s largest providers of outpatient dialysis) to defend his reading of the statute, which does seem to require differentiation based on the condition. But the framing of the “proxy” question by Kagan dominated the discussion.

The most interesting passage in the argument came in an extended discussion by Kagan (who formerly served as solicitor general of the United States) with Assistant Solicitor General Matthew Guarnieri, who appeared in support of the insurer. Kagan commented early in Guarnieri’s argument that “what most confuses me about this case, Mr. Guarnieri, is why you’re on this side of it. I mean, I hate to say the obvious, but usually the government is concerned about the state of government finances.”

When Guarnieri responded that the language of the statute compelled the government’s position that the plan is not improperly differentiating in its treatment of end-stage renal disease patients, Kagan responded sarcastically: “I’m moved. … I’m sort of moved by your adherence to principles of statutory interpretation, but usually the government fights for the government’s interests, especially when there’s … such an obvious counterargument to your statutory argument.”

It’s possible that a silent majority of justices will emerge to defend Marietta’s literalist reading of the statute, but if the comments at oral argument are representative of the sentiment of the court, we can expect a relatively prompt opinion in favor of DaVita.