On second day of hearings, Jackson responds to Republican critiques on criminal sentencing 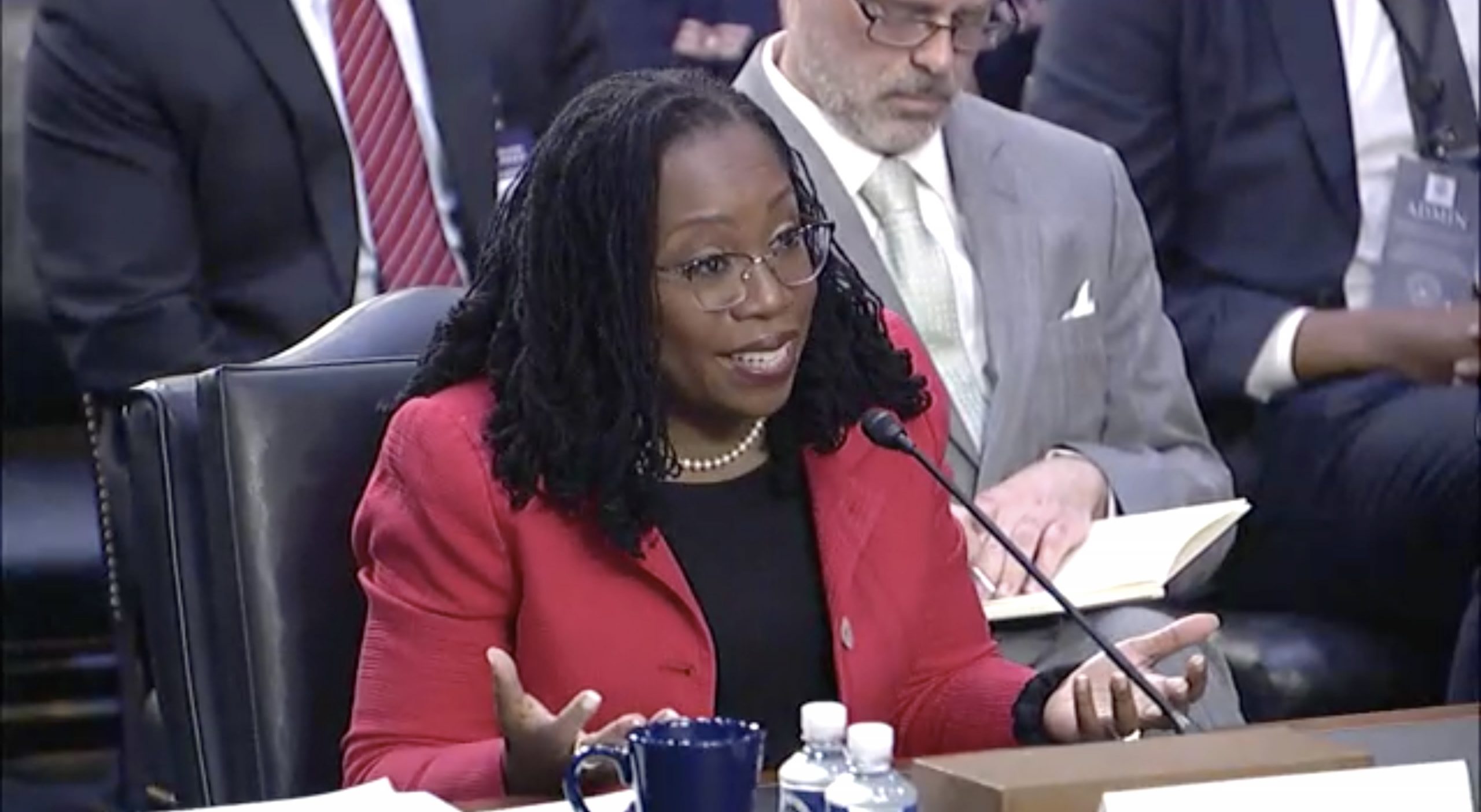 Supreme Court nominee Ketanji Brown Jackson extolled judicial restraint, avoided weighing in on what she called policy issues, and defended herself against Republican assertions that she was too lenient in criminal sentencing during her eight years as a federal district judge.

During a marathon hearing on Tuesday, Jackson answered questions from 20 members of the Senate Judiciary Committee, which is considering her nomination to become the first Black woman to serve on the Supreme Court. At times, the hearing turned tense as Jackson, in measured but forceful terms, responded to insinuations by some Republicans that she is overly sympathetic to defendants convicted of possessing images of child sexual abuse.

“As a mother, these cases involving sex crimes against children are harrowing,” Jackson said. “Trial judges who have to deal with these cases are presented with the evidence or descriptions — graphic descriptions. These are the cases that wake you up at night, because you’re seeing the worst of humanity.”

Jackson was responding to comments by Republican senators — including Tom Cotton of Oklahoma, Ted Cruz of Texas, Josh Hawley of Missouri, and Mike Lee of Utah — who identified child-pornography cases in which Jackson issued sentences below the ranges suggested by federal sentencing guidelines.

Sentencing experts say Jackson’s decisions in these cases were mainstream. Nationwide, most defendants who are convicted of possessing or sharing images of child sexual abuse receive sentences lower than the guidelines range, and the U.S. Sentencing Commission has called on Congress to overhaul the penalties for these crimes because stakeholders view the current guidelines as inconsistent and, in many cases, overly harsh.

Jackson said Congress has mandated that judges consider numerous factors in sentencing, not just the federal guidelines. She said she fulfilled her duty to hold defendants accountable for their crimes in accordance with all the factors.

Jackson also defended her work, early in her career as a lawyer, representing people accused of terrorism and detained at the Guantanamo Bay military prison. Under criticism from Republicans, Jackson said most of that work occurred when she was a public defender and unable to choose her clients. And she emphasized that legal representation for everyone is a fundamental American value.

Cruz accused Jackson of being sympathetic to critical race theory, the academic field that studies racial bias in legal institutions. He even showed up to the hearing with a stack of children’s books about race that he said were taught at Georgetown Day School, a private school where Jackson is on the board.

Jackson said she is not an expert in critical race theory and does not subscribe to it. “It doesn’t come up in my work as a judge. It’s never something that I’ve studied or relied on, and it wouldn’t be something that I would rely on if I were on the Supreme Court,” she said.

Democratic senators uniformly praised Jackson and sometimes used their time to respond directly to Republicans’ critiques. They noted, for instance, that several of her family members have worked in law enforcement and that Jackson has won endorsements from national police organizations.

In response to questions from both parties, Jackson refused to weigh in on contemporary legal issues, policy debates, or even some of the Supreme Court’s own practices.

For instance, she said she had no position on whether the court should allow its hearings to be televised. If confirmed, she said, she would want to discuss the issue with the other justices first.

She expressed no view on the court’s recently increased use of the shadow docket to hand down significant rulings in an emergency posture, often in unsigned and unexplained orders. She added that the court should balance two interests: the need to decide emergency matters quickly and the virtue of careful deliberation.

And she remained mum on efforts by some liberal groups to persuade Congress to expand the size of the Supreme Court. She acknowledged having a private opinion on those efforts but said that, as a judge, she feels it would be inappropriate to share that opinion.

Repeatedly throughout the day, Jackson described herself as deeply mindful of the proper limits on the role of a judge.

“Courts are not policymakers, and judges should not be importing their own policy preferences,” she said. “Judges are restrained in our constitutional scheme in order to effect the will of Congress in terms of their interpretation of the laws.”

Jackson will return to the committee room on Wednesday, the third day of her nomination hearings, for another daylong question-and-answer session.