In climate-change case, justices grapple with EPA’s role, congressional intent, and their own jurisdiction 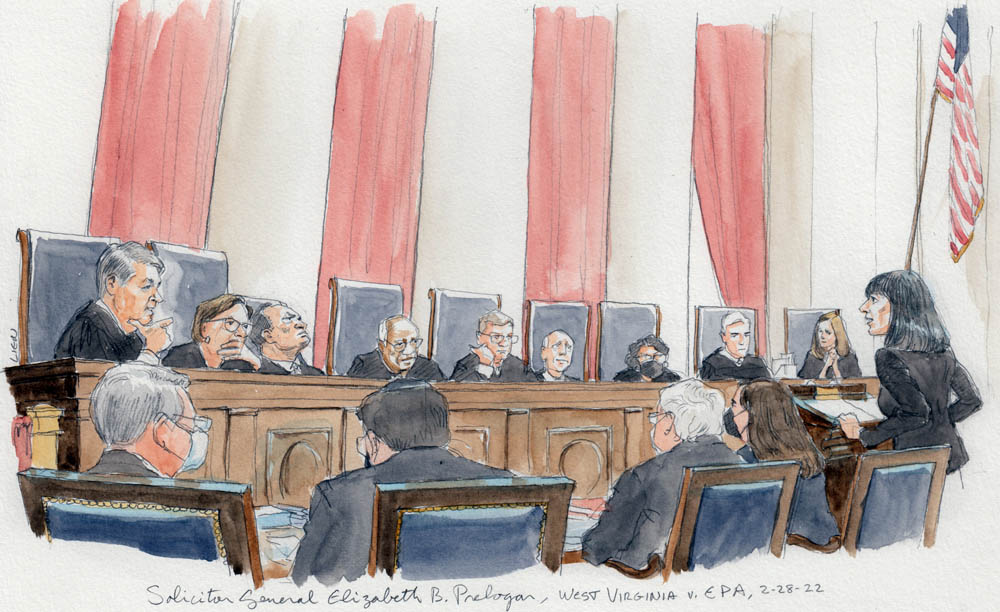 For two hours on Monday, the justices probed the extent of the Environmental Protection Agency’s authority to regulate greenhouse gases in a case with high stakes for the Biden administration’s plans to slow climate change. By the end of the oral argument, there were no clear indications about how the court is likely to rule.

The case, West Virginia v. Environmental Protection Agency, hinges on a technical provision of the Clean Air Act, but much of the argument focused on two broader themes: whether the Supreme Court has jurisdiction to resolve the dispute at all and, if so, whether the lower court’s decision violates the “major questions” doctrine — the idea that if Congress wants to give an administrative agency the power to make “decisions of vast economic and political significance,” it must say so clearly. A ruling that adopts an expansive interpretation of the major-questions doctrine – as some conservative groups are advocating – could curtail the regulatory scope not just of the EPA but many other federal agencies as well.

The oral argument occurred on the same morning that a panel of scientists convened by the United Nations issued a major new report that warns of dire effects from climate change and concludes that nations are not doing nearly enough to cope with a warming planet.

The dispute began in 2015 with the Obama administration’s adoption of the Clean Power Plan, a rule that sought to combat climate change by reducing carbon pollution from power plants. The plan never went into effect, however: Several states and private plaintiffs challenged it in federal court, and a divided Supreme Court put it on hold in February 2016.

The Trump administration’s EPA repealed the Clean Power Plan in 2019, replacing it with a more lenient policy, known as the Affordable Clean Energy Rule, that established emissions guidelines only for existing coal-fired steam plants. The Trump EPA argued that it was compelled to repeal the Clean Power Plan because it exceeded the agency’s authority under the Clean Air Act. Specifically, the EPA contended, Section 7411 of the act only allowed it to prescribe measures that can be implemented on the physical premises of a power plant – a limitation known in industry parlance as “inside the fenceline.” By contrast, the Clean Power Plan included some measures that applied industry-wide.

The Trump EPA’s decision to repeal the Clean Power Plan and issue the ACE Rule led to another court challenge by a different set of plaintiffs. In January 2021, the U.S. Court of Appeals for the District of Columbia Circuit vacated the repeal of the Clean Power Plan, vacated the ACE Rule, and sent the issue back to the EPA for more proceedings. The Supreme Court then granted a request by Republican-led states and coal companies to review that ruling; meanwhile, the Biden administration EPA has indicated that it will not reinstate the Clean Power Plan and is instead drafting its own rules on greenhouse-gas emissions from power plants.

One question before the court on Monday was whether the Republican-led states and the coal companies have a legal right to bring the case to the Supreme Court at all when the D.C. Circuit’s decision is on hold until the Biden EPA issues a new rule.

Lindsay See, the solicitor general of West Virginia, urged the court to go ahead and decide the case. “Standing is no reason to avoid the merits” of the case, she stressed. The Republican-led states and the coal companies are asking the Supreme Court to invalidate the D.C. Circuit’s decision, she observed – and they would benefit from such a ruling. 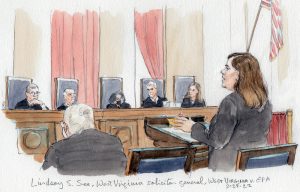 Justice Neil Gorsuch addressed the question, telling See that the Biden administration had made a “strong argument” that the states had not been harmed by the D.C. Circuit’s decision.

See again countered that the effect of the D.C. Circuit’s decision was to unwind the Trump EPA’s repeal of the Clean Power Plan, setting up a scenario in which that rule could come back into place. For the Supreme Court to throw out the case on the ground that it lacked the power to decide it, the parties defending the D.C. Circuit’s decision would have to show that it would be impossible for the Republican-led states and the coal companies to obtain any relief.

Sotomayor echoed the same concern in a question for Yaakov Roth, who argued on behalf of the North American Coal Company. In the D.C. Circuit, Sotomayor said to Roth, you asked the court to invalidate the ACE Rule – which it did. How do you now have a right to sue? 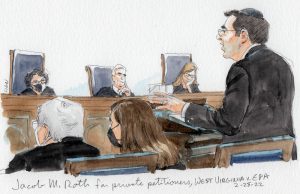 Representing the Biden administration, U.S. Solicitor General Elizabeth Prelogar agreed that the dispute is not properly before the justices because there is no EPA rule in effect at all. The D.C. Circuit, Prelogar argued, struck down the ACE Rule and did not revive the Clean Power Plan. What the Republican-led states and the coal companies are really trying to do, Prelogar suggested, is to constrain the EPA’s power in future rulemaking.

Chief Justice John Roberts was more skeptical. Before the D.C. Circuit’s decision, he observed, the ACE Rule was in place, but after the D.C. Circuit’s ruling, it is no longer valid. Why, he asked Prelogar, isn’t that something that the Supreme Court can review?

Justice Samuel Alito also appeared dubious. He asked Prelogar whether the Supreme Court had ever ruled that a lower court’s stay of its own decision rendered a dispute moot – that is, no longer a live controversy.

Prelogar pushed back, suggesting that the premise of Alito’s question missed the point. The Biden administration, she emphasized, is not relying on the fact that the D.C. Circuit put its ruling on hold to argue that the Supreme Court no longer has the power to decide the case. Rather, she said, the D.C. Circuit’s stay simply makes clear that the Clean Power Plan will not be revived under any circumstances. 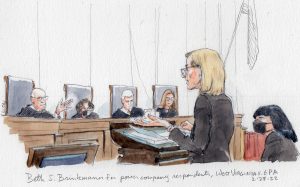 The justices and lawyers also spent much of Monday’s argument on the contention, made by the states and coal companies, that the D.C. Circuit’s decision interpreting Section 7411 to give the EPA more expansive power violates the major-questions doctrine.

There did not appear to be a clear consensus among the justices about how to apply that doctrine generally, or whether it applies in this case. Justice Clarence Thomas, for example, asked See to explain how the justices should decide which tool of statutory interpretation – the major-questions doctrine or some other tool – to apply.

See responded that when the Supreme Court “deals with major questions, it is focused on the nature of the power at stake.” And in other cases like this one, she posited, involving “transformative power that crosses industries and goes outside of” the agency’s “core competency,” the justices have applied the doctrine.

Prelogar, by contrast, told the justices that the case does not implicate the major-questions doctrine because the Clean Power Plan “wouldn’t have had major consequences.” Indeed, she noted, the energy industry achieved the plan’s emissions goals nearly a decade early, even without any federal regulations in place.

Kagan appeared to agree with Prelogar that the case did not present a major question, although for a slightly different reason. Measures that can be implemented on the physical premises of a power plant can have a very small effect, or they “can be catastrophic,” Kagan offered. The interpretation of Section 7411 that the states and companies are advancing, Kagan asserted, would have essentially no relationship to whether a rule involves a “major question,” because the costs of a rule can be significant even if they only affect individual power plants, rather than being implemented industry-wide.

But Roberts resisted Prelogar’s suggestion that courts should interpret a statute or rule and then determine whether the result is consistent with the major-questions doctrine. Why, Roberts queried, wouldn’t you consider the doctrine from the outset? Citing two recent cases in which the Supreme Court applied the major-questions doctrine to block the Occupational Health and Safety Administration’s vaccine-or-test mandate for large employers and a moratorium on evictions imposed by the Centers for Disease Control, Roberts suggested that any determination of whether the doctrine applies should begin with an inquiry into whether the agency action under review is “kind of surprising.”

Alito appeared to voice support for the idea that the major-questions doctrine applied to this case. He recounted to Prelogar Roth’s argument that the application of the doctrine would be similar to the eviction case because the Biden administration is claiming that the EPA has the authority to set industrial and energy policy “and balance such things as jobs, economic impact, [and] the potentially catastrophic effects of climate change.” “Why,” Alito concluded, “isn’t that correct?”

Justice Amy Coney Barrett characterized one formulation of the major-questions doctrine as resting on the idea of the administrative agency “staying in its lane.” But what you are arguing, she told Roth, is different than the idea of a “mismatch” “between the subject of the regulation and what the agency does,” because here the subject – regulating greenhouse gases – falls within the EPA’s “wheelhouse.”

Roth disagreed, telling Barrett that it “is a mismatch.” The EPA, he said, isn’t merely regulating emissions. Instead, he asserted, it is “regulating industrial policy [and] energy policy.”